With the petrol prices soaring, we decided to get a diesel powered car in our long termer fleet. Something that doesn’t just have a low running cost but is also affordable when it comes to maintenance and also has good quality plastics. Hence we finalized the Vista. The Vista was recently revamped and was embellished with features usually seen on a sedan. 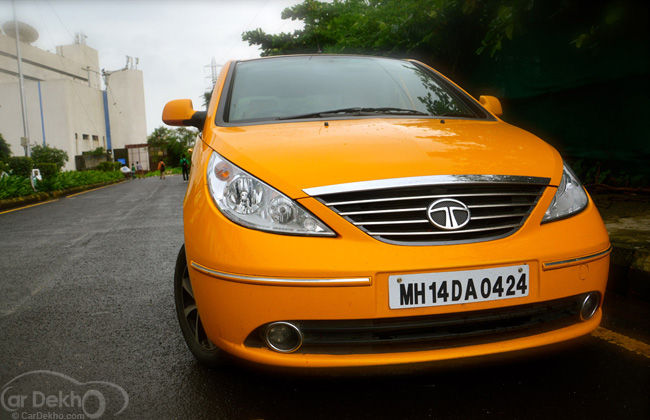 We are doing a reliability report on the Tata Indica Vista ZX that comes with 1.3-litre diesel engine. Expect an in-depth report in every 15 days.

In our first report, we shall be speaking about the interiors. The titivated version of the Vista has much better interiors than the outgoing version. We love the black and beige interior combination over the previous beige interiors. Although, we would have been happier with darker fabric for the seat as beige tends to get dirty easily and the stains are hard to remove. Indians love the beige colour for some reason. We believe beige goes well only when used on leather than fabric.

Even the boot of the Vista is large enough to swallow the clobber for a weekend. We wish the sill was a bit lower for easy loading of luggage. Another good touch on the car is the place to pull down the hatch without dirtying your hand. To our dismay, the steering wheel feels a bit large for a hatchback and we wish it was a bit smaller. The steering mounted-audio controls are perfectly placed and are easy to use. These buttons on the steering wheel are illuminated, and these come handy at night. Another handy feature is that these button work even when the car is on ignition. It is not the case on most of the cars and the car has to be switched on to avail this feature.

Another added feature on the Vista is the bluetooth streaming. One can connect his mobile phone to the music system to make and receive calls, and at the same time this connectivity can be utilised to stream music from your smart phone.

What’s more is that songs that are being streamed can be skipped or changed without accessing the mobile phone. So far, we have liked the space and features of the car and we haven’t faced any issues with the car. Watch out this space for our next report.

The Indica Vista that we are driving is powered by a 1.3-litre multijet diesel engine. This is the same Fiat oil burner that also propels the Fiat Grande Punto, Maruti Suzuki Swift, Maruti Suzuki Swift DZire, Maruti Suzuki Ritz and the Premier Rio. The 1248cc oil burner produces 74bhp at 4000rpm and a peak torque of 190Nm. The Vista comes mated to a five-speed manual transmission.

The NVH (noise, vibration and harshness) levels of the engine are fairly low, however there is a typical diesel clatter on cold starts. The clutch has been softened by 20% as per Tata’s claim and it does feel light. However, if you release the clutch slowly in traffic, there is a lot of clattering noise from the engine. This sounds like knocking, but is actually to do something with the clutch plate, as it stops once you leave the clutch pedal or press it completely.

The engine has some amount of turbo lag and it is at about 1900rpm when there is a rush of power. Below 1900rpm, the engine hesitates a bit to pull. This multijet engine is one of the most reliable engines and the most widely used diesel engine in the Indian car market. This can be a bit of trouble, but once used it things are fine. The Vista’s engine is fairly smooth, and the engine doesn’t really slur and the power delivery is linear like a petrol mill. Overtaking isn’t an issue and the engine has sufficient power to drive in the city and also on the highway.

The engine is frugal as well, as it returns about 14.1 kilometres to a litre in a mix of city and highway driving.  We haven’t been driving pedal-to-metal, neither are we driving in an economy mode. Still, the fuel efficiency of the Vista is good enough. The Vista comes with a fuel tank of 37 litres, which makes it a good commute for about 450kms. This engine comes mated to a 5-speed manual transmission. The gearshifts on this box are wee bit rubbery. Even the throws are a bit long. Slot it into a higher cog and the engine might not pull it cleanly if the rpm is low. In a nutshell, the engine is highly reliable and frugal as well.

The Indica Vista has now spent over a month and has now become a part of the daily routine.  Still there are many features that were unknown. The Vista gets a bottle tray below the co-driver’s seat. Also, the glove box has a slot to put in your pen and papers. The fascination to drive the Vista is still high, as new exclusive things are being discovered everyday.

The music system of the Vista is another such great hidden package. You can tune the Bass, Treble and other primary aspects as per your liking. If you aren’t still satisfied, then you can further fine-tune the bass, treble as it even has fine-tuning.  The only disappointment is the speaker output, but they aren’t bad for the price tag the Vista comes for. The steering mounted audio controls work even when the car is switched off and this is not seen on many cars.

The biggest boon of the Vista is its Bluetooth connectivity. It makes life easy and now making and receiving calls is very simple. Also, the advantage of pairing multiple phones is another asset.

The air-conditioning is also brilliant. It doesn’t have rear seat vents, but the four blowers are sufficient for both the rows and size of the cabin. Despite the large glass in area, it is capable of cooling quickly. We haven’t been driving the Vista much, but we should soon take it for a long trip and especially the highway to stretch its legs.

After 1600km with the Indica Vista, we part ways. It was great to have the Vista for a period of two months. Not only did the car perform well, but it also has decent fuel efficiency. It returned us an approximate fuel efficiency of the 13.5kmpl with mostly bumper-to-bumper city driving.

The car does feel heavy when more than 4 people sit in it. The only way out if to increase the pressure in your tyres. There is a bit of struggle, the once the turbo kicks in the things are fine. The boot space is also decent, however we finish the loading bay was a bit lower. We can gobble a large suitcase and few smaller bags also.

The only thing that we weren’t happy about was the headlamp of the Vista. The spread of the light is decent; it is the reach that isn’t pleasing.  Despite being triple barrel lamps, the reach needs some improvement. Other than this, we had no issues with the car and we didn’t face any kind of issue in terms of reliability or quality or even any kind of rattling noise. The yellow buddy leaves our garage, and will always be remembered.

The Indica Vista as an overall product is good value for money. Not only does it come loaded with various bells and whistles, but it also has acres of space. The issue of plastic quality has been taken care and even these plastics feel better since the recent facelift. So, post the facelift, features like steering mounted audio controls, dual tone dash board, soft touch feel and also electrically adjustable ORVMs are an advantage.

Today, the Indica Vista in a feature loaded car, with easy to use music system and also the integration of the mobile phone isn't difficult. Once, the phone is paired connectivity is also easy. So, the Indica Vista has always been a good proposition for each and every moolah you spend. Tata has made it even better than before.

The 1.3-litre multijet engine on the Indica Vista is one gem of a powerplant and is definitely the most widely sold diesel mill in the country today. So, there is no issue of performance, reliability and fuel efficiency. If you are one of those who is worried that the Indica Vista's reliability, then be stress free as this has been well taken care by Tata. Also, with the added chrome, alloy wheels and smoked effect tail lamps, the Indica Vista also looks more stylish than ever. So, this also appeals equally to the youth as well.