We were a bit disheartened to learn that Skoda was downsizing the Rapid to a 1.0-litre petrol engine in the BS6 era. Then we drove it… 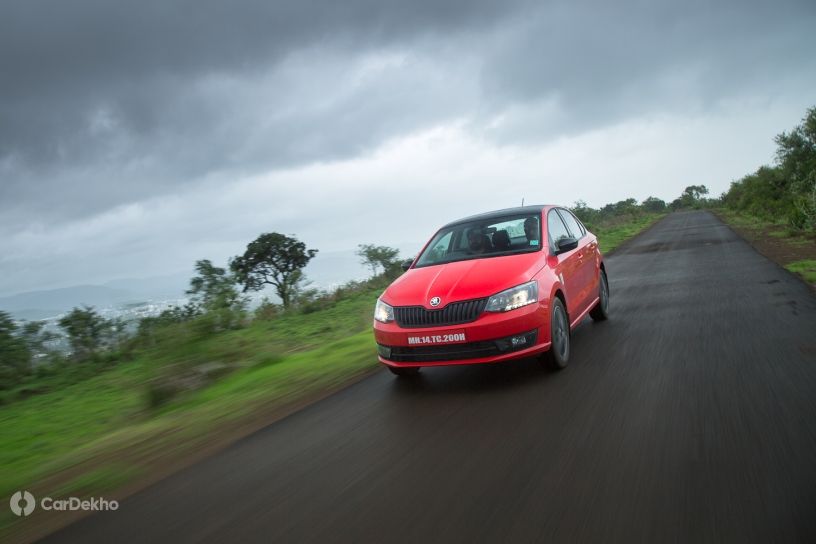 It will be nine years this November since Skoda first began selling the Rapid in India. In that time, a front end redesign, a slight bump in power for the 1.5-litre diesel and the addition of a few creature comforts sums up the attention it got from Skoda. Despite that, it has continued to soldier on. And that is because it offered the kind of driving pleasure most other cars in that segment wouldn't dare to. Now however, the BS6 landscape has taken away two of its most prized jewels: the punchy yet thrifty 1.5-litre diesel and the super-quick 7-speed DSG. Along with the diesel and the DSG, Skoda has also bid adieu to the 1.6-litre petrol and its 6-speed automatic as well. With both its powertrains now in the wind, can the Rapid still put a smile on your face? Let’s find out:

Your only option now is a 1.0-litre, three-cylinder turbo petrol engine. And the turbocharger helps it dish out a healthy 110PS and 175Nm of peak torque. The only transmission option for now is a 6-speed manual, although a 6-speed torque converter will be offered in the near future.

Slot that key into the ignition and turn it (yes, you still don’t get push button start/stop) and the new engine comes to life with a thrum that your ears will instantly recognise as the clattery noise of a three-cylinder engine. Strangely enough, the only vibrations you’ll feel are at idle, and that too, tiny amounts from the seats. This is something you can expect from a three-cylinder engine. And that is where you’ll find that ‘small’ three-cylinder story come to an end.

Get going and you’ll find that the Rapid TSI is an easygoing partner in the city. It revs quite cleanly and power in the top part is quite evenly spread out. However, drive constantly below 2000rpm and you will find that the Rapid feels sluggish. Nothing that won’t get you around town but you won’t have any power on tap. Prod the throttle and hold it there and you’ll suddenly be greeted by a huge surge of torque that comes in at around 2200rpm. So if you are driving around sedately, you’ll have to work a little to make quick overtakes, like dropping a gear. The surge in torque is surprising, but you can easily modulate it using the throttle once you get used to it. The Rapid will also be easy on your pocket. It returned a fuel efficiency of 12.79kmpl in our city test.

It might have its limitations in the city but you’ll find that this small petrol motor feels right at home on the highway. The tall gearing allows you to keep pulling past traffic without feeling the need to change gears. What it also means is that you end up seeing high-triple digit speeds in third gear itself if you are really going for it. And if you are not chasing redlines, looking to extract every ounce of performance, you can calmly slot it in sixth gear at 90kmph. This offers a rather calm cruise on the highway. In such a scenario, you’ll find this engine to be quite fuel efficient as well. In our tests, the Rapid returned 17.13kmpl on the highway.

And lest we forget, the new 6-speed manual complements the engine well. It slots in smoothly and the short throws work well in tandem with the sporty nature of this engine. The clutch is super light so even Bombay traffic jams won’t leave you with worn out cartilages in your knee. You will find its long travel a bit odd though, considering that the biting point comes quite early in its range of motion. Initially, it can be a little confusing finding the right driving position, although a few days of driving and you’ll find that sweet spot.

There’s no other way to say it but the Rapid’s ride has always been a bit of a back-breaker. Owners and enthusiasts (of which I am both) will be seen making excuses like ‘it helps the handling’ and what not. But in our hearts we have always wanted a bit more cushioning. And with this update, Skoda has answered those silent prayers.

The ride has become a bit more supple. You’ll now find that the Rapid handles smaller potholes or speed breakers with a little bit more dignity. However go over the sharper stuff a bit carelessly and you’ll hear that dull but loud thud from the suspension. It might be dull in nature but it is enough to sink the heart of any self-respecting car owner.

Luckily, and what makes me wish this update should have been rolled out a lot earlier, handling has become even better! How? The smaller 1.0-litre engine seems to be lighter, at least compared to the diesel (new Rapid weighs almost 100kg less compared to the diesel). Less weight on the front allows this front-wheel drive sedan to corner more aggressively. This allows you to carry more speed through corners.

You will find that body roll is, like before, nonexistent. The steering, though, feels a little lighter at city speeds but is well weighted. And that will add to the convenience of making u-turns. But while you’ll find the steering light to use in the city, it still feels quite stable at highway speeds. However you won’t find much in the way of feedback from it. The brakes feel reassuring and more than adequate for the Rapid’s performance and size. You will miss feedback from the pedal though.

Changes in the looks, interior and features are ever so slight that they can be summed up under one heading. In fact, there are none to the exterior whatsoever. Even the interior is pretty much the same as before. Only change you will find in the Style and Monte Carlo variants is the new 8-inch touchscreen. And we are not sure if you’ll appreciate this one.

It essentially is an Android tablet with a crisp display and a smooth touch operation. But it does not support Android Auto or Apple CarPlay. However, you still get the option to connect your phone with a bluetooth to play music and answer calls. Look on the bright side though. Being Android-based allows it to connect to an internet hotspot and download all the apps you use on your Android smartphone. Did someone say Netflix? Now Netflix and chill wherever you want, just be parked (For safety it wont play video content when the car is moving and the handbrake isn't pulled). Which brings us to the next topic.

The Rapid continues to be offered with the same safety kit as before. You have ABS and two airbags as standard on all variants. Strangely enough, four airbags are only offered on the Style variant, which sits below the Monte Carlo edition. Even the pretensioners and load limiters for the front seatbelts are reserved only for the Style variant. And the only other differences between these two variants are aesthetics. So if safety is your number one priority, pick the Style variant.

The traction control system has been given a miss as there is currently no automatic variant on offer. However, we expect Skoda to offer it when the automatic variants of the Rapid go on sale.

I honestly didn’t think Skoda could have bettered the sedan when it came to sheer driving pleasure. But they have. And that too by swapping out that nice diesel and the DSG for a small petrol three-cylinder and a manual. It misses out on some creature comforts when you compare it to its rivals but it undercuts most of them in price too. And if you are worried about reliability issues, Skoda is offering a 1 lakh kilometre warranty package with road-side assistance, included in the price of the car.

Your ownership experience will be further sweetened by the fact that buy anything above the base Rider variant, and you can get an annual maintenance package for just Rs 10,000. It covers all the regular stuff till 60,000km.

Our recommendation is that you must definitely check out the Rapid if you list driving pleasure in the top three things you consider before buying a new car. It will offer you great performance, and decent fuel efficiency as well. What you will find lacking is space compared to its rivals. But if you are a family of four, it should still suffice.