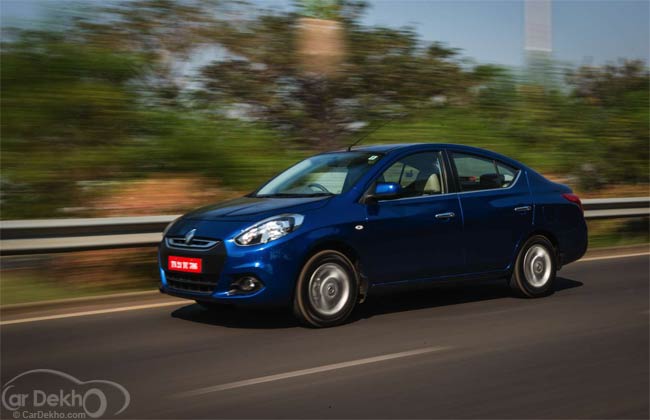 Renault fulfilled its promise of introducing five new products in the Indian market industry by the end of 2012. The last new product was the Scala, which is the re-badged version of the Sunny.

Ofcourse, Renault has made a lot of things to the exterior styling and now, Renault has gone a step forward as it introduces the CVT version on the Scala, before its Japanese partner. We take a spin in the new CVT version of the Scala.

The designers at Renault have done a marvellous job of restyling the front of the Sunny. The combination of chrome and matt black at the front grille makes the fascia look stylish and more premium. The headlamps are sleek and it makes the snout look very stylish and even more aggressive.

The silhouette of the Scala screams out of it being rebadged version of the Sunny. However, the Renault alloys look more elegant than that of the Nissan. At the rear, the Scala looks way different from the Sunny. It gets a thick chrome strip, with Renault embossed on it. Also, the C-shape in the tail lamps contributes to the panache. The soul differentiator between the manual and CVT version of the Scala is the CVT badge at the rear. Apart from this, the rest of the kit remains identical.

The instrument panel of the Scala are similar to what you get in a Sunny and also to a certain extend that the Micra and Pulse get. The top-of-the line Scala gets keyless-entry and exit, push start and stop, climate control air conditioning, electrically-folding ORVMs and also steering-mounted audio controls.

The Scala gets leather upholstery in the top-of-the-line RxZ and softer rear seat headrest. The CVT version of the Scala is offered in RxL and RxZ trims.

The only difference in manual and CVT is the change to automatic gear knob and also also a gear shift indicator on the instrument cluster.

The interiors are well ergonomically designed and the space is also good in the front row. Crawl into the second row and you will amazed with the leg room it offers. Even a six footer can sit comfortably even if the rear seat is pushed back. That is why, Nissan advertised the Sunny with the Caaaaar TVC.

The softer head rest on the rear seat upsurges the comfort level.  The large boot of Scala can easily gobble a weekend luggage for four with ease.

Renault has retained the 1.5-litre petrol mill that whips out 98bhp of power and 134Nm of maximum torque. This is the same mill that also powers the manual petrol Scala. The engine is well refined with low NVH levels. However, this isn’t a very happy to revv engine. The engine whines as it inches closer to redline. The power delivery of the motor is fairly linear.

The CVT transmission came into existence, as it has higher fuel efficiency than the conventional boxes. Hence, the Renault Scala delivers a fuel economy of 17.97kmpl as per ARAI cycle. In the real world, when driven with lighter foot it will be close to 12kmpl in city driving. The engine is fairly response to the throttle; however there is some lag till the power gets transmitted to the wheels. When driven lightly, the CVT box revs the engine at about 1800-2000rpm delivering the best possible fuel economy.

The Scala’s underpinnings are the same as the Sunny, however Renault has tweaked the suspension a bit for better handling. Still the ride on the Scala feels more calm and composed at low speeds. To our dismay, it gets a bit jittery at higher speeds if the road tarmac isn’t smooth.

The Scala still has soft suspension set-up and it has decent handling. There is some amount of body roll when you take corners, and the tail tends to get a bit happy to step out.

Also, the light steering wheel is a boon to drive in city and tight corners. It also weighs up decently, but it feels slack around corners.

The CVT version of the Scala has a vibrant exterior styling, decent driving dynamics, spacious interiors and now an efficient engine and transmission. Renault is pretty confident to price the Scala CVT at a highly aggressive price to capture a greater percentage of the market. Today, the Scala has an 8% market share when compared to competition and the CVT box will enhance this share, if priced well.