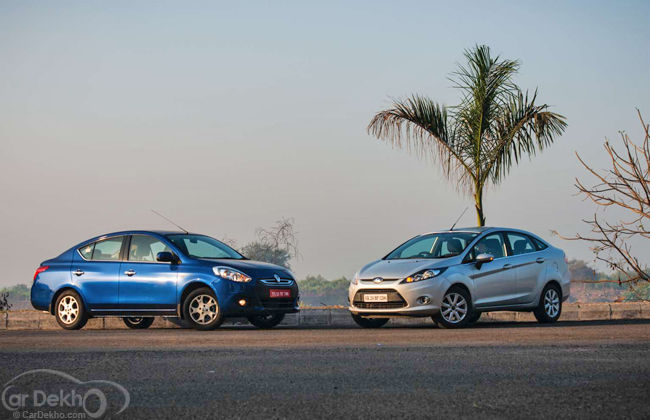 The Renault Scala and the Ford Fiesta are two different automatics, here to make the difference. The recently launched Scala CVT is the only vehicle in its segment to get this transmission, while the Fiesta gets a double-clutch box. Both the transmissions are different from the conventional automatic and we pit the two C+ sedans against each other.

The Scala might be the rebadged version of the Sunny, but Renault’s design centre has done a fabulous job of the Scala looks more urbane than the Sunny. The matte black and the chrome does meld well with the sleek and sharp headlamp design. At the rear, the Scala looks way different from the Sunny. It gets a thick chrome strip, with Renault embossed on it. Also, the C-shape in the tail lamps contributes to the panache.

The Fiesta on the other hand has razor sharp styling, just like the blade of a ninja’s sword. The streamlined snout with small front grille and sleek headlamps, this blends perfectly with cab forward design. The high glass-in area also makes the car’s cabin airy and has a chrome strip that runs on its beltline. The large chunky boot indicates pracility, even though it does look a bit odd.

The interiors are ergonomically designed and the space is also good in the front row. Move into the second row and you shall be staggered with the legroom it offers. Even a six-footer can sit comfortably even if the rear seat is pushed back. The large boot of the Scala can easily swallow a weekend luggage for four people with ease. The Fiesta on the other hand has a more tech-like instrument panel. It gets the flowing centre console with numpad on it and red backlit screen adds to the ambience of the interiors. The twin dials on the instruments aren’t just easy to read but good to use as well. The features like cruise control, voice command and Bluetooth connectivity with audio streaming make a strong case for the sedan.

The new instrument panel of the Fiesta looks contemporaneous. The twin dial instrument cluster is easy to read. The centre console gets the numpad and various buttons on it and the red backlite looks good at night. Too many buttons can look confusing, but it isn’t that difficult. The electrically folding ORVMs are a great adding and the mirror curves out to get a better view of the next lane. The front seats are much larger with much better support for your thighs.

The Renault Scala CVT comes mated to 1.5-litre petrol engine that produces 98bhp of power and 134Nm or maximum torque. The engine is well refined with low NVH levels. However, this isn’t a very happy to revv engine. The engine whines as it inches closer to redline. The power delivery of the motor is fairly linear. The CVT transmission came into existence, as it has higher fuel efficiency than the conventional boxes. Hence, the Renault Scala delivers a fuel economy of 17.97kmpl as per ARAI cycle. In the real world, when driven with lighter foot it will be close to 12kmpl in city driving. The engine is fairly response to the throttle; however there is some lag till the power gets transmitted to the wheels. When driven lightly, the CVT box revs the engine at about 1800-2000rpm delivering the best possible fuel economy.

The Ford Fiesta AT comes only with the 1.5-litre petrol engine that produces 108bhp of power. The engine produces decent power, and most of this is useable at a higher rpm. The NVH levels are fairly low, just like any other modern petrol engine. The engine whines as you rev it harder.

Fiesta is the only vehicle in its segment to get dual-clutch transmission. Ford is offering a 10 year/2,40,000km warranty on this transmission. The shifts on this self-shifting box are quick and smooth. It doesn’t get paddle shifts, but L is the ideal mode to drive in if you want to extract the best performance out of it. The D mode is for comfortable driving and is definitely to the perfect if you need the best fuel economy. Put your foot down and the transmission engages in the correct gear in no time. The six-speed box means you can cruise at higher speeds, while the engine spins at a lower rpm improving the fuel efficiency.

The ride on the Scala feels more calm and composed at low speeds. To our dismay, it gets a bit jittery at higher speeds if the road tarmac isn’t smooth.

The Scala still has soft suspension set-up and it has decent handling. There is some amount of body roll when you take corners, and the tail tends to get a bit happy to step out.

The ride of the Fiesta is supple and smooth. It doesn’t feel unsettled even on rough roads as the suspension does a phenomenal job of soaking up more of the road shocks and keeping the occupants comfortable. The handling of the Fiesta is just like any other Ford. The alacrity of the chassis is astounding as it flexes to give you one of the best handling sedans in its segment.

The Scala is the latest entry from Renault and is also the re-badged version of the Nissan Sunny. Renault was quicker to get the self-shifting box over Nissan, as Scala’s market share is constantly on the rise. The French manufacturer states to have an 8 percent market share and is confident about an increase in stake. The Scala CVT is a good option to procure, especially if your driving is within the city.

For those who need an automatic that will give you the joy of driving and let you move swiftly even on winding roads, then Fiesta should be your choose.