Published On Mar 15, 2012 By Ritesh for Renault Fluence

It has been a while that Renault is in the Indian market. From the days they partnered with Mahindra and sold the Logan, a partnership that did not go very well, till recently that Renault has been going solo, the French car company has seen a sea change in the perception with Indian customers. The model line-up for Renault India reads as Pulse hatchback, Fluence Sedan and the Koleos Luxury SUV. The expansion for the dealer network has been rapid with many new Renault showrooms coming up across the country in a short span of time. 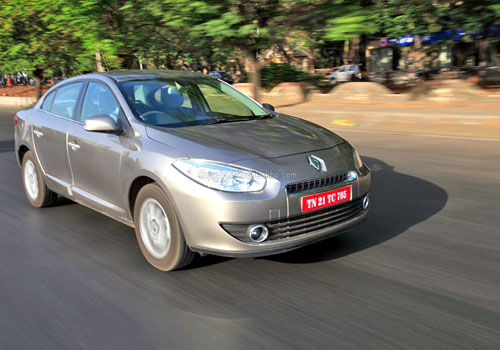 Renault launched the Fluence globally in 2009, five years after its initial concept was showcased in 2004. The Fluence shares the Renault-Nissan C platform. For the records, Renault Fluence is also sold as the Samsung SM3 in Korea under the Renault-Samsung alliance.

The Fluence was Renault’s first launch for India and is one hell of a pretty looking sedan. Initially Renault did get a fully loaded Petrol version of the Fluence but the Diesel variant did miss out on a few features. Recently Renault has upgraded the Fluence Diesel and got the fully loaded E4 variant to its line-up. We test drove the Renault Fluence E4 Diesel to check if it really is as fluent as it claims to be. Read on to know more.

Cat eye headlamps have the stretched back design on them while the front bumper has a narrow grill with chrome surrounds on it. The front bumper goes up pretty high into the bonnet. The large Renault logo in chrome adds to the visual appeal of the nose. The slim front grill is complimented by the large wide air dam that’s on the lower end of the bumper.

A rounded waistline runs across the sides finally mating with the upswept boot area. The Renault Fluence has thick muscular body coloured door mouldings placed on the lower part of the doors just above the running board. The E4 variant of the Renault Fluence Diesel comes with blacked out window frames with chrome lining. The mirrors get integrated turn lights and are in dual tone finish. The Renault Fluence E4 Diesel drives on 6.5 X J16 ten spoke alloy wheels with 205/60 R16 Tubeless Radials. The E4 also gets the auto lock/unlock sensors on the door handles that open and shut automatically when you are carrying the car remote with you.

The rear section of the Renault Fluence is symbolized greatly by the large petal shaped tail lamps. These wrap-round tail lamps appear elegant and give a neat design to the tail of the Renault Fluence. All Renault cars have their model name written on the boot lid in large font and the Fluence too has F L U E N C E inscribed in chrome on the back. The E4 gets a lot of chrome and the number plate on the boot too gets a chrome lining along with the exhaust tip that gets the round chrome end.

The rear wind shield has a nice inclined angle thanks to the sloping roofline. The boot appears upswept / raised and has a bulged look to it. The rear bumper has integrated reflectors on it and is in duotone with the lower part being in matt black fibre with reverse park sensors on them.  The Renault Fluence is a very pretty looking sedan; it has got a strikingly different design and is a head turner. The build quality on the outside is high and so is the paint quality.

Step inside the Renault Fluence and you will immediately notice the loads of space available in its cabin. The dashboard is tastefully done; the top dash is made of soft rubbery material in black while the lower dash is in light beige color.

The dash also gets a thick wood insert running across. The instrument cluster is a twin pod layout with the tachometer on the left and the speedo in the middle and a digital trip meter on the right side. The tacho needle is in yellow color looking very cool. The speedo is an all digital display with the speed reading in large digits and two more reading are shown-one for the fuel and other for the engine temperature both also in black LCD with white background.

The cluster has a silver lining running around the pods. The Renault Fluence E4 gets a leather wrapped steering. The steering is a 3 spoke affair with steering mounted cruise control. The steering can be adjusted for height and reach manually. The audio control module is placed on the right side just under the steering wheel, typically Renault style. The center dash is taken up by a LDC screen that reads out the music track, radio station and Bluetooth connection to phone call etc.

The AC vents can be shut individually as per need. The Renault Fluence E4 Diesel now gets a two zone climate control. Just under the climate control is the single CD MP3 player with radio. The Renault Fluence E4 Diesel comes with keyless entry and with a smart card which can be placed in the card port just under the audio system.

You have the engine start/stop button next to the smart card holder while we would have liked this button placed slightly nearer to the driver. You also get the USB port and an AUX connection port. The Renault Fluence E4 Diesel gets a leather covered gear knob with silver insert.

The Renault Fluence E4 Diesel gets full leather upholstery. The driver seat now gets height adjust with lumbar support.  The front seats are well designed and give a lot of comfort to the occupants. Fluence has one of the most comfortable seats among the cars in this segment.

The centre arm rest is slim sized and has some storage space inside it. The rear seats are 40-60 split type with adjustable headrests. You get foldable centre arm rest with cup holder at the rear and also a rear AC blower vent for the rear passengers. The rear seats are comfortable for seating three passengers abreast with good amount of leg room and head room to spare.

The rear passengers can also escape from the sunlight using the side window curtain and the rear windshield curtain that comes included on the E4 variant of the Renault Fluence Diesel.

The Renault Fluence Diesel comes powered by the hallmark dCi diesel engine. This is the K9K engine that is co-developed by Nissan- Renault. You guessed it right this is the same engine that also powers the Nissan Micra but on the Renault Fluence it comes equipped with a VGT turbo that pushes its power level considerably higher. The in-line four cylinder dCi engine on the Renault Fluence has a displacement of 1461 cc and hauls out 106Ps of power @ 4000rpm generating 240Nm of torque at 2000RPM. The dCi engine is mated to a six speed manual gearbox.

You need to button to start the engine. Once the engine comes to life, you feel its refinement levels. The Renault Fluence E4 Diesel feels very relaxed and calm at idle. Shift to first gear and you are on the move, the power delivery is not as instant as a few other cars in the segment but once you cross the 2500RPM mark, things begin to change.

The drive is sedate at the start but once power builds the performance gets better. The gear ratios are fine tuned for high fuel economy and Renault claims a fuel efficiency of 21.8kmpl on the Diesel Renault. We managed to get 19.5kmpl which is not bad in real drive conditions.

The engine drives in a smooth fashion, the diesel engine noise is not felt to an extent and the drive quality is pretty good. The steering feedback is very good even though it’s an electric steering which is considered as light and lifeless.

The Renault Fluence has Mac Pherson type with coil spring, stabiliser bar and double acting shock absorber in the front and Trailing arm type suspension with coil spring and double acting shock absorber at the rear. In lay man’s language this suspension set up is a fool proof setup for Indian driving conditions.  The suspension is tuned for a very comfortable ride quality and passengers in the rear are benefitted the most. The Fluence irons out the bad roads with ease and provides the best suspension ride in the segment.

The Renault Fluence on the handling front may not be the best but does live up to the expectations. The Fluence handles tamely and has a low amount of body roll. The Fluence is a sweet car to take in corners to some extent but its USP is the best in class ride quality and high speed stability.

Renault had initially not given all the features to the Diesel Fluence and now has realized their folly and corrected it by introducing the E4 Diesel Fluence. The Renault Fluence is undoubtedly a very cherubic looking sedan in its class and a sure head turner. The ride quality is the best among the segment.

The only drawback is the lack of outright power which is well covered up by a very stable high speed ride quality and high fuel efficiency.

The Renault Fluence competes with the likes of VW Jetta, Chevrolet Cruze, Skoda Laura and Toyota Corolla as its diesel burner rivals.

The Renault Fluence Diesel prices start at 12.99 lakh for the E2 Diesel and 14.40 lakh for the fully loaded E4 Diesel that we tested.