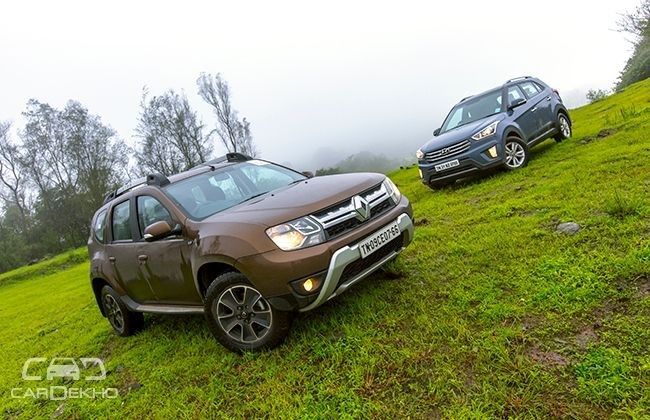 I’ve never quite understood the allure of the compact SUV segment myself. Sure, a little added ground clearance goes a long way, but my preference has always been for the dynamics you get with a sedan. However, two of India’s most popular compact SUVs have proven that my thought process is more the exception than the rule.

The Duster was nothing less than a saviour for Renault India. With the Koleos, Fluence and Pulse being a rarer sight than an honest politician, the Duster got the French marquee laughing all the way to the bank. Hyundai, on the other hand, took surprisingly long to catch up with the UV trend. However, the launch of the Creta has proven to be every rival’s nightmare come true, with the model racking up over 1 lakh bookings in less than a year of its launch.

The Duster has now received extensive updates and Hyundai has launched new variants of the Creta too, making the game all the more competitive. Got around Rs 12-15 lakh in the bank and wondering which one to buy? We’ve got you covered!

I’ll be honest, when the Duster first came out, I wasn’t a big fan of the design. It seemed a bit too ordinary. With the facelift though, Renault’s done just enough to make it visually attractive and while the dimensions and core design remain the same, you get nice touches like the chrome-accented smoked-out headlamps, a chunky two-slat chrome grille and dull-silver skid plates. The air dam is also larger than before and while the LED tail lights look fantastic, the highlight for me would have to be the newly-designed gunmetal 16-inch alloy wheels.

As a package, it’s quite close to the traditional idea of an SUV and has the right amount of ‘butch’ going for it. The Creta though, isn’t old school in any sense of the word. It’s modern, has the typical amount of edgy design elements you’d expect from an Asian carmaker, and is quite fashionable. While it is a head turner, it doesn’t have the aesthetic aggression many want from an SUV, but that also makes its appeal more universal. Whether it’s the length, width, height or wheelbase, the Creta is smaller than the Duster in every dimension, but it has a perfectly proportioned layout.

Highlights include swept back headlamp clusters with projector lights, LED light guides, 17-inch alloy wheels and faux skid plates. Everything from the windshield washers to the request buttons on the door handles have been integrated seamlessly, but if I had a grouse, it would be the rear design. Apart from the gaudy chrome strip above the number plate, the rear end just looks a bit awkward. Overall, though, its slender profile and clean layout has and will find a lot of takers, though I prefer the Duster’s muscular design.

It’s hard to believe just how much of a quality benchmark Hyundai has become. The Creta’s dark beige-black layout is easy on the eyes, while the generous glass area keeps things airy, at least at the front. The seats are comfortable and supportive for people with a medium build, though larger folks will find them snug.

Space is no problem either and even taller chaps (I’m 6.5ft tall) will have no trouble finding the perfect driving position, courtesy the height-adjustable driver seat and tilt-adjustable steering wheel. The interior defines the Creta as the offend-no-one offering it is. Ergonomics are spot on and everything from the steering mounted controls, climate control console and window switches fall to hand easily.

As you’d expect from a Hyundai, the cabin is attacked with features. You get a smart-key and a push-button starter, leather upholstery (recently introduced with the AT), electrically adjustable and foldable wing mirrors and rear AC vents. Also offered is a touchscreen infotainment system with navigation, and the 6-speaker sound system’s quality is appreciable. Problems? Well, there are a few odd omissions. In the automatic, the seatbelts aren’t height-adjustable, the MID isn’t as detailed as the one you get in the top-end manual variant and while the considerably cheaper Elite i20 gets auto-headlamps, a cooled glovebox and a reach-adjustable steering, the Creta doesn’t.

With the Duster facelift, Renault definitely improved the utilitarian cabin of the older model. However, it still doesn’t quite match up to the Creta’s cabin layout. The black and brown dashboard looks good and works well with the new piano black centre console that gets silver garnishes on either side. Plastic quality has improved over the pre-facelift model, but still isn’t anything to write home about. Space, though, is generous and while the seats don’t get leather upholstery, they’re more supportive of larger frames than the Creta. The seat compound is also a little firmer which makes it more comfortable for highway trips; speaking of which, you also get cruise control (unlike the Creta).

The feature list isn’t as expansive as the one in the Creta though. Forget a smart-key, you don’t even get a flip-key. The Duster does get a 7-inch touchscreen infotainment system with navigation, but the touch response isn’t as smooth as the Hyundai’s and the interface just feels dated. The primary issue with the Duster’s cabin would be the awkward ergonomics. While I adapted to the audio and phone control unit being behind the steering wheel, the climate control buttons and infotainment screen don’t fall into your line of sight and need you to take your eyes off the road to operate them.

The Duster, though, can accommodate 3 people with a little more ease in the rear seat and the boot is also larger (475-litres vs the Creta’s 402-litres).

The Creta AT gets dual-airbags and ABS with EBD as standard, but unlike the top-end manual grade, you can’t have it with 6 airbags, ESC or hill-start assist. The Duster AMT does get ABS with EBD, ESP, hill-start assist and a driver airbag, but unless you get the range-topping RxZ variant, the passenger doesn’t get an airbag.

While the Creta gets two diesel engine options and the Duster’s oil-burner is offered in two states of tune, the two-pedal versions only get the most potent iterations. Powering the Duster AMT is a 1.5-litre turbo-diesel engine that’s good for 110PS of power and 245Nm of torque, paired with a 6-speed AMT gearbox.

Fire up the engine and it settles into a refined burble. Vibrations are noticeable, but the motor is well-tuned as far as diesels go. Let go of the brake and the car creeps forward at a steady pace and crawling traffic is a breeze to manage. The engine offers a healthy amount of torque before the turbocharger kicks in, and that highlights the fact that the gearbox has a tendency to hold onto a gear for longer than required. Throttle response is good and what you’ll really appreciate is the engine’s mid-range which translates to fantastic in-gear acceleration.

However, it is plagued by the typical AMT drawback – jerks. Gear changes are not seamless and the transmission isn’t quick to respond. Slam the pedal down and there’s a wait of around 2 seconds before the downshift, making overtakes a bit tricky at times. It’s not a powertrain for the enthusiast, but works well in the city and makes the Duster a capable highway cruiser as well. To filter through trucker traffic on inclines, simply slot it into manual mode and with a little patience, you can have a really enjoyable drive.

The Creta, however, does get the superior powertrain. While the 18PS and 15Nm surplus give it an advantage, it’s the 6-speed torque-converter gearbox that makes the real difference. Not only is the 1.6-litre CRDi engine more refined, the engine is more rev happy and the gearbox is more intuitive as well. There’s no noticeable turbo-lag and while slamming the pedal does make the engine sound gruff, downshifts are quick and there’s little guesswork involved.

The Creta’s powertrain just feels more modern, especially considering the price point these rivals have been placed at. You can drive it enthusiastically and have some fun, and when you’re looking at some relaxed and smooth commuting, the autobox’s slick gear changes make the Creta great for the chauffeur driven lot as well. Simply put, the Duster’s powertrain gets the job done, while the Creta’s does it with precision.

While Hyundai offers the better engine and transmission package, the Duster’s ride and handling is nothing short of a benchmark. It pummels through the worst roads without breaking a sweat and gives you the confidence to take on broken patches without lifting off the throttle. The 205mm ground clearance is also more than the Creta (190mm), but bear in mind that the AMT only comes with front-wheel drive, so you will need the manual AWD for off-roading.

The steering does need a little effort to use in the city, but is well-weighted and direct at highway speeds. The only issue is the steering’s stubborn return-to-centre action, which gets in the way of hard cornering. However, the Duster is hands-down the more fun to drive machine of the two and is only let down by the lazy gearbox. Meanwhile, the Creta feels like a tall-boy Verna. The steering is one-finger light at slow speeds, but pick up the pace and you find yourself wishing for more feedback. The ride quality, while compliant, can’t demean potholes like the Duster.

However, the Creta’s neutral mannerisms mean it has more mass appeal. For those who want an urban runabout, it is the safer bet, but rest assured, if you want an involving driving experience, the Renault is the way to go.

Both cars offer a stable drive, but the Duster’s brakes offer more bite and are better to use, especially on the highway. Nose dive under hard braking is also managed better in the Renault.

While both cars fall into the same segment, their personalities are worlds apart. The Duster is all about durability and dealing with the rough stuff, while offering some creature comforts along the way. The Creta, on the other hand, prioritizes comfort and features over driving dynamics and is for the person who wants a premium all-rounder.

Variant to variant, the Duster is cheaper by Rs 1.66 to 1.92 lakh and it is good value for the price. If you are looking at extensive highway usage, need exemplary bad road ability and want the better driver’s car, the Duster takes the cake. However, if you want a premium, feature loaded SUV with a sedan’s ease of use and a smoother everyday driving experience, the Creta is still unmatched.