The Toyota Camry happens to be the 2nd best-selling car model after the Corolla in the Toyota line-up. The Toyota Camry was introduced in the year 1982 worldwide and debuted in 2002 in India. For some extra knowledge, the word Camry is the synonymous for Crown in Japanese and Toyota also had a model by the name Crown. 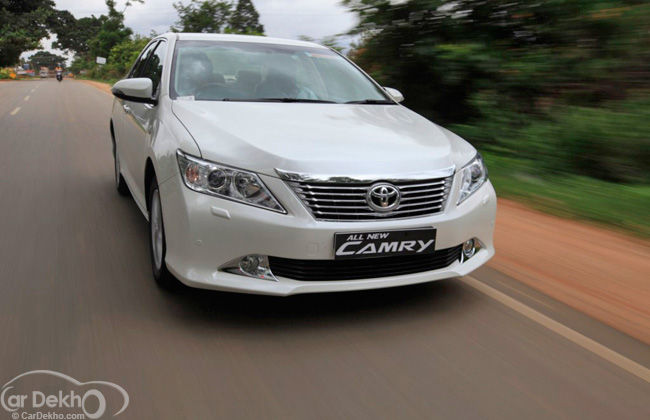 The Camry happens to be the best selling passenger car model for North America. Toyota Camry has seen 6 generations worldwide and now enters its 7th generation. 14million Camry’s have been sold by Toyota worldwide till date.

There are two versions of the current Camry, codenamed XV50 worldwide, an American and an Asian version. We in India would be getting the Asian version which has a revised front and rear end. The other big news on the Camry which till now was being imported (CBU), would now be assembled (CKD) by Toyota at its Bangalore plant.

Toyota would be launching this the 7th generation Camry in India on the 24th of August. We drive the New Toyota Camry on the outskirts of Bangalore to bring you this detailed review of what would be the youngest entrant to the Executive sedan segment soon.

The New Toyota Camry does not share any of its styling cues from the outgoing Camry. The overall design on the outside has got much sharper and trendier as compared to the older Camry. The New Toyota Camry gets an all-new sharp face with a big chrome radiator grille which has 6 horizontal slats. The grille has a V design to it.

The Camry gets a pair of angular HID projector swept design back headlamps. The front bumper also gets the soft angular treatment with headlamp washers mounted on it and round fog lamps placed in chrome housing. The wide air dam is positioned on the low end of the bumper and is in all black.

The New Camry has a bulging bonnet with lines that flow from the windshield and mate with the V shaped chrome radiator grille. This bulgy bonnet makes the front view of the New Camry very appealing. The side profile of this sedan is what makes it appear larger than the outgoing model, though the dimensions are nearly the same. Slim fenders go well with the slim A-pillar on the New Camry.

The wing mirrors get an all-new rounded shape and have the integrated LED turn lights on them. The A-pillar, B-pillar and the C-pillar are all slim which makes the New Camry appear very sporty when viewed from the side.

The door handles are in chrome, going well with the overall chrome splash on the New Camry. The windows frames also get the chrome garnish with blacked out B pillars. There also is a chrome strip that runs across the running board under the doors and this strip adds to the ornamental value of the side profile. The side of the New Camry can be easily distinguished by its soft waistline. The roofline and the C-pillar mate at an angular shape that enhances the headroom at the rear.

The New Toyota Camry runs on 215/60 R16 spec Yokohama Decibel E70 tubeless tyres that are mounted on a 10spoke 16inch alloys. The rear profile of the New Camry is wide and flat with angular design language. The tail lamps get the LED type glow and are shaped in a semi rectangular style and extend into the boot lid.

The New Toyota Camry with its new design on the outside looks a lot younger and in-time. The exteriors are sober yet rich and look very attractive and yes, the New Camry does look a lot like the Lexus ES350 which should be a huge positive compliment for it. The build quality on the New Camry is solid and typical Toyota with good fit and paint finish.

The New Toyota Camry gets a three-tone shade interior. The dashboard gets hand stitched leather covering while the lower dash is in beige. There also is a thick band of faux-wood that runs across the dash.

The speedo cluster gets round dials with the RPM on the left, speedo meter in the centre calibrated to 240KMPH and a combination fuel meter with economy meter dials on the right side.

The instrument cluster work on the Optitron backlight glow. The meter dials get a touch of thin chrome strip on them and the needles are in light blue shade which is uniquely different from car that we see.

A MID display is placed in the speedo meter dial that can toggle between the various parameters of the car while on the go. On the right side of the dashboard, is the engine start-stop button that also has a nice chrome strip around it.

The manually height adjustable and telescopic steering on the New Camry is a four spoke design wrapped in leather and also has a dash of wood finish on the top centre position and a thin strip of chrome that enhances the touch and feel of the steering. The steering also has the multi-function control buttons to control the audio system and Bluetooth telephony.

The centre dash gets a 2DIN touch screen DVD display with single CD MP3 and Radio function, the same display also doubles up to show the car information system. Reverse camera display is also seen on the same screen. The New Camry has a two zone climate control with AC vents for the rear passengers too.

The New Toyota Camry gets all electric adjustable front seats. Settings for height, reach, back incline and lumbar support can be electrically adjusted using the buttons placed on the seats. The front passenger seat gets an extra pair of buttons placed just under the passenger side head rest; this button helps the driver set the front seat when it is vacant to suit the rear passenger as he does not have to reach out for the buttons that are placed on the lower side of the seat on the other side.

The front seats are in all leather and offer good support. The rear seats are sofa like and very comfortable. The Camry is usually chauffeur driven and it’s the rear seat comfort that it’s known for.

The foldable centre arm rest gets a small storage space but a rear remote is sorely missed. The doors get a touch of the wood finish and also have large bottle holders on the door panels.

The build quality on the New Camry is high and appears to last a long time. The New Camry has tons of legroom and headroom. The driver seat position is perfect with very comfortable steering and seat positioning.  The control pedals are placed in good comfortable distance from each other and the emergency brake is push type leg activated.

The New Toyota Camry comes powered by a 2.5litre 2AR-FE 4 cylinder Petrol engine. The 2 AR-FE engine also powers the Toyota RAV4 and the Scion (sister concern of Toyota) tC sedan. This 2494cc engine makes 181PS @ 6000RPM and has 233Nm of torque @ 4100RPM as opposed to the 2362cc engine that made 167PS and had 224Nm of torque on the older Camry. An overall increase of 14PS. The 2.5litre engine on the New Camry comes with DOHC and VVT-i technology on it.

The New Camry's engine is mated to a 6-speed Automatic transmission with sequential shift. Press the push button to start the New Camry and the high refinement level is instantly felt. The engine noise is hardly heard inside the cabin at idle and at slow speeds. The power delivery is instant, thanks to the big engine and the power output. The gear shifts are seamless and go un-noticed as they shift. The feedback on the steering is progressive, keeping the driver involved at all times. We did some high speed runs on our test and the Camry behaved flawlessly when put through some bends and corners.

The Toyota Camry was in India for long, sales number for it was not exactly encouraging for Toyota. Toyota India has done its homework by getting the latest fresh looking Camry to India and moreover it would be assembled at its Bangalore plant, which should bring down its price to some extent.

With the introduction of the New Camry, Toyota has left no stone unturned in the design, equipment, specification, ride and comfort department.  The New Camry would be a very good opportunity for Toyota to make its mark in the Executive Sedan segment. We expect the New Camry to be priced by Toyota at about Rs. 23 Lakh, Ex Delhi when launched on the 24th of August.

The Toyota Camry competes directly with the Honda Accord, Skoda Superb, Hyundai Sonata and the Volkswagen Passat in the price and size segment.