“I cannot afford to lose but I have to gain. The gain should be affordable. And the gain should lead to further gain” that’s what exactly the Swift Dzire must have thought before it underwent a total cosmetic surgery.  There was a challenge before Maruti engineers when they had to redesign the Dzire. The length of the car should be within 4 meters to gain from the Govt Tax policy. Yet, the boot should not be shrunk keeping in mind the usability. 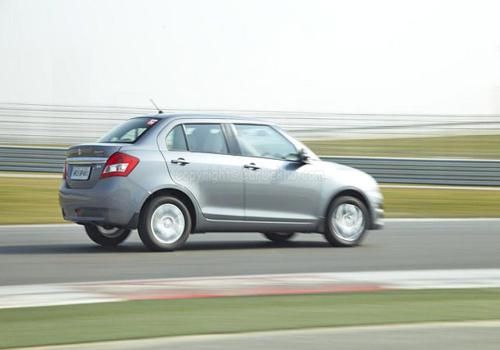 The new Dzire is 165 mm shorter than the previous one (3995 mm). At the same time, the breadth has increased by 5 mm making it roomier. The height has also increased by 25 mm so more head room. The wheel base is increased by 40 mm yielding in better ride quality.

All this was made possible by using the new Swift platform. The boot has been reduced to 316 litre from 440 litre to get the tax benefit, which indeed is an irreparable defect. But the space is more than enough for a small family to go for a long or short distance trip .My personal opinion is that the boot of the old Dzire was a bit too long.

The turning radius has been increased to 4.8 metre from 4.7 metre but it does not affect the driving. The ground clearance is still the same (170 mm), all thanks to Maruti.

Now let us view the new Dzire from the front. A new blue ZDI Dzire that was awaiting me in front of the McClarren garage in the pit lane of Buddh Circuit. The most attractive change in the front view is in the front bumpers. Air dam has become wider. The bumper design near the fog lamp gives more alluring look for the “U” character of the front.

Moreover the vertical headlamps and the bonnet add to the good looks of the front view. The new black grill is trendier than the old chrome lined grill which was beginning to look dated. The similarity of the new Dzire and the Swift are welcome, no second thoughts about it.

The view from the sides makes the size of the car more noticeable. Turn indicators have been added to the wing mirrors looking really neat. Maruti says that it has given more importance to the motion in the design of the 15 inch alloy wheels in the Z variants. Wheel designing has to be a little trendier but its better now than the earlier Dzire wheel design. The new Dzire verifies the fact that manufacturers have to give more attention to the wheel designing of small cars and mid size sedans.

The rear design clearly shows a change from the rounded shape of the predecessor. The rear design is evidently prominent with the boot lid with in-built spoilers, trapezoidal tail lamps and the bumper that configures with the “U” shape of the front. The boot which looked like a large suitcase now seems like a nicely shaped notchback.

The design, in total, displays the vigor and novelty of youthful spirit. The first thing that attracts us when we enter the car is the interior color scheme which blends a sporty black with energetic beige.

The black color that extends from the dashboard till the door panels is really attractive. Beneath these narrow wood finish inserts are also given. The rest of the space including the seats is done in beige. This gives a large roomy pleasant feel in the cabin. The aristocratic look of the silver-chrome touch on the AC vent on the center console, steering wheel and the door handles look stylishly designed. The steering in a new design is now manually tilt-adjustable.

The instrument cluster has also been modified. There is a liquid crystal information display in the midst of the cluster. All the details regarding fuel efficiency, average mileage, distance that can be travelled using the fuel left, odometer – trip meter readings, the temperature outside, time … etc are all available on the console.

The new Dzire has the best audio system with auto volume control. There is an automatic climate control device placed beneath the audio system. Below the climate control there is the accessory socket and USB port which has now become a must have in all recent car models.

There is a lot of storage space above the glove box with a retractable cup holder. The space within and the seats have not changed much as compared to the older Dzire seats and the comfort level also remains the same. The rear leg room has increased with the step-up in the wheel base. The interior of the new generation Dzire gives a more up market feel than the older one.

Let us take the New Dzire for a spin, shall we? We place our car towards the first curve on the Buddh Circuit, leaving the pit lane and the starting point. No noise from outside is heard inside the cabin, not even the revving of the engine proving that the in cabin sound insulation is now much better. After the third curve comes the longest strait in all the F1 tracks across the world, the 1248 cc DDIS engine prepares for a lurch while the gear is shifted to the second. I reached the end of the strait when the gear was shifted to the top.

The speed is reduced to 60 from 160. I am reminded of the F1 racers who sped at 330 km/hr in this strait though the Dzire cannot be compared to their cars. The engine is the same as in the old Dzire. The power is 75 Ps and the 190 Nm is the torque. The car reaches the speed of 100 from zero in about 14.8 seconds.

The mid range performance allows less braking at high speeds and the turbo is more enjoyable as it starts working before 2000 rpm. The 5 speed gear box which suits the engine deserves special mention.

The curves 4 to 16 in the track made the handling capacity of the car more evident. The stability has improved than the old Dzire. The rear suspension is softer than the new Swift. The steering feedback is also much better and lively. All in all the Diesel version of the New Dzire clearly outshines its predecessor in a grand manner.

The petrol variant has a 1.2 litre K series engine with VVT. The power has increased at least by 2 hp due to VVT (86 hp). This engine can perform well in the start and at the top end. Maruti has for the first time introduced a 4 speed automatic transmission option in the new Dzire VXI variant. Fuel efficiency has also improved. The mileage certified by ARAI is 19.5 kmpl for diesel and 23.4 kmpl for petrol. Dzire is available in Pacific Blue and Glistening Grey colours.

The second generation Dzire has around 150 changes, small and big. Maruti says it spent around Rs.230 crores on the New Dzire development. The new Dzire comes with new features which will upkeep the tradition of the old one which conquered about 40 % market in the entry level sedan segment.

Maruti always had a winner with the Dzire, it out sold all sedans in its class. People were ready and are still ready to book and wait for the allotment of their cars for nearly 6months. Now with the New Dzire, things can only get better. The New Dzire looks much trendier and more like today’s time sedan.

Long list of features come in and the quality and fit finish have also improved largely. The ever reliable petrol and diesel engine units are now tuned better to give higher performance and efficiency. The New Dzire easily retains its title of ‘The King’ in its segment rather easily and is the best buy in the segment.