With the third-generation, Mini for the first time - offered Cooper in a five door version. Let’s see how practical it has become with its extra pair of doors and increased dimensions! 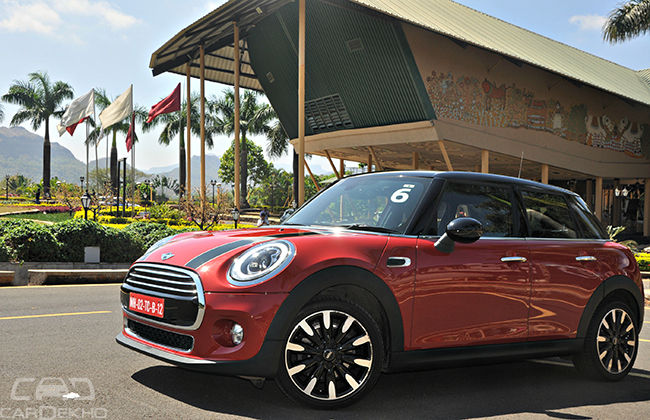 Mini went conventional way with the Cooper last year, they added an extra pair of doors for the first time along with stretching the dimensions, going mainstream. But the question arises - does the extra weight and increased dimensions hampered Mini’s classic go-kart-feeling or not? Let’s figure it out! We drove the 5-door Cooper diesel on beautiful winding roads of Aamby Valley, Pune.

Apart from sideways, look at it and you will be mistaken for its 3-door sibling. Except the increased length (nearly 160 mm) and unnoticeable bump in height (11 mm), the 5-door is pretty much the carbon copy of the third-gen 3-door model. And like its sibling, the 5-door also gets classic Mini design cues - short overhangs, quirky styling and floating roof.

The front profile features the same bulbous headlamp cluster featuring semi circular LED daytime running light, LED fog lamps and optional LED headlamps. The bumper is understated compared to S trims, which currently is not offered in the 5-door version. Rear profile gets same bulkier retro styled tail lamps with a chrome surround. Speaking of the accessories, almost everything is optional including that racing stripes and the snazzy looking wheels on my red car. It rides on 16-inch alloys as standard while sportier 17-inchers are optional.

The 5-door share it’s interiors with the 3-Door car, the newly designed dashboard brings lot of practicality solution to this third generation Mini. Starting with the speedometer, the centrally mounted speedometer has gone to its conventional place, behind the steering wheel along with the rev counter and a trendy fuel indicator. The classic Mini retro switches are there in the center console but the electric window switches are shifted to the doors from the central console in previous gen model. Instead of it, the central console gets a sexy new engine start-stop toggle.

The Mini Sport seats are optional in it and since it is a 5-door, it also has an extra head rest for the fifth passenger at rear. Contrary to this, the vehicle is good for 4 people with ample leg and shoulder space but you can hop-in 4+1 sometimes! Compared to 3-Door’s 211-liter boot, it features a larger 278-liter boot and 719-liter when rear seats are down. Speaking of the infotainment system, it gets Mini Connected system with a standard 6.5-inch screen or you can even go with the mighty 8.8-inch widescreen, as seen on my car!

Under the hood of Cooper D 5-door is the brand new engine from BMW’s new modular engine family that are built from scratch. Unlike previous generation Minis, which were powered by the existing BMW motors, things have altered with the third generation. 2014 Mini used the brand new engines for the first time before the powertrains fell down to other BMW models.

Now, about the Cooper D 5-door’s 1.5-liter unit, its the same motor that’s also under the 3-door Cooper D. The 3-cylinder oil burner displaces 1496 cc and generates 114 horses @ 4000 rpm and a generous 270 Nm pouring in at 1750 rpm. The engine figures are not inspiring but the 5-door Cooper D clocks 0-100 kmph in 9.4 seconds and it tops out just over 200 kmph. Like its specs the acceleration time and top speed are also not exciting but considering under-10 second acceleration to 100 kmph, its not a slow car either.

Speaking of the drivability, with my short stint with Cooper D 5-door, the engine felt quite peppier and is effortless to drive. Though it is not a sprinter but it produces more than adequate lugging power. The 3-banger sends power to the front wheels via a six-speed steptronic auto box and is a decent one with quick shifts. Moreover, you can also plonk the optional Mini driving modes - Sport/MID/Green - which however comes standard with the Cooper S. For the diesel, Mini claims a certified fuel efficiency of 21.15 kmpl nearly 3.8-liters to 100 km.

You must be wondering the extra pair of doors and increased weight must have affected the drivability of the hatch. But this is not the case here, the Cooper D 5-door offers the same kind of go-kart agility that Mini is famed for. Speaking in-terms of the weight, the 5-door is nearly 55 kg heavier than the 3-door and this is not hampering anything expect .2 seconds more time to naught to 100 kmph and an unnoticeable difference in the top speed. Over the winding roads of the Aamby Valley City, the 5-door was quite zippy and well mannered. And like the 3-door, it also feature struts at front and multi-link at rear. The suspensions soak most of the bumps and are acceptably softer, without hampering handling, compared to the previous gen’s slightly bumpy ride. Furthermore, if you opt for the Mini driving modes - Sport/MID/Green you can also go for the optional Dynamic Damper Control (adaptive suspensions).

With the added pair of doors, the 5-door Cooper D raises an arrow towards Mercedes Benz A Class and BMW 1 Series in India. This said, at Rs. 36.10 Lac Cooper D 5-door is expensive then both of them despite being less feature loaded. And pretty much of its high-end stuffs are optional. However, the added doors also comes with the perks of practicality, indeed this third gen Mini has increased its practicality quotient but 5-door adds more - considering India, as people love hatches with 5-door here! Compared to A Class and 1 Series, Mini also turn heads more everywhere you go and its easy and nimble maneuvering brings fun filled everyday driving.  Furthermore, if you want a hotter petrol 5-door version - the ‘S’, its still awaited, 3-door version got it recently with a powerful 2.0-liter turbo petrol!