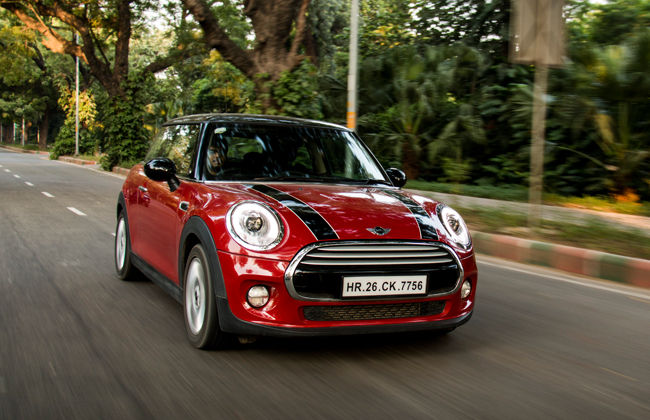 It was past midnight and the rain was beating down ruthlessly. I’d been up early that morning and after a long day of shooting, office and a usual Friday soiree, all I wanted was to get home and nestle up with a session of good music and sleep. The semi-lit roads of Gurgaon offered little traction, and there were hardly any vehicles in sight. Almost two years back, when I had the Mini Countryman all to myself in a similar setting, I was a euphoric 20 year old, so I did something that my boss kept saying no to – I floored it. I’m still euphoric and just 20-something, so I replicated the decent action and floored the Mini Cooper as well. Before I could figure out, the grippy tyres screeched, the traction control tried to restrict my excitement and the Cooper darted ahead in a hurry. I wasn’t looking at my watch, but I covered the next 52 kilometres and reached my place in less than half-an-hour. I’m sure it could have been lesser with the Cooper S, though the go-kart driving dynamics of the Cooper D doesn’t really allow you to complain either. The Mini is running into its third generation and claims to be the most evolved one till date. Is it so? We figured out.

Mini claims to have built this new generation model from scratch with changes to just about every part, however they haven’t tried to go too radical with the iconic design, which according to me is fair too, because redefining the way the Mini looks wouldn’t be a wise decision. It retains all the typical Mini traits, including those minimal overhangs, floating roof and stubby side profile.

The easiest way to differentiate this new Mini from the predecessor, however, is to spot the semi-circular LED DRLs that run around the headlights.

There’s passable amount of chrome present on the several parts of the car, including the front grille, headlamps, tail lamps, door handles and around the window line, which does look too flashy at times. The contrasting roof colour, black race strips on the bonnet and round wing mirrors adds to the sporty appeal this car carries.

While running along the bottom and the fenders is a black plastic cladding compliments the design well. Overall, Mini is still as appealing as it used to be, but has lost some cuteness for sure, at least I feel so.

Inside, the new Mini retains the same retro yet funky styling theme, but in an evolved manner. The build quality and fit-finish has gone up and offers a really upmarket feel. The ‘round’ essence continues to dominate the cabin in this generation as well. From the steering wheel and its mounted controls to the big central display, aircon vents, speakers as well as the door handles are round. And what isn't round, is oval.

The big centre dial that housed the speedo in the last generation model has now been ditched in favour of an 8.8-inch display, which surprisingly is not part of the standard kit. In fact, very little is. For most of the bells and whistles you can see in this press car including the infotainment system and sunroof to even basics as audio buttons on the steering wheel and leather upholstery - all these are being offered as add-ons.

I particularly liked the red coloured toggle-type start/stop button that looks dramatic and stands out between those chrome-overdosed switches.

This new Mini is longer, wider and taller than ever before and though it’s not evident from the outside, it certainly translates into better space on the inside. The front seats are well bolstered and won’t allow you to complain.  While getting into the rear seat is a real task for an adult, it’s reasonably comfortable to be there once in, but only for medium sized occupants.

This new Mini Cooper D is powered by a 1.5-litre three-pot twin-turbo oil-burner that puts out a maximum 114bhp @ 4000rpm and peak torque of 270Nm @ 1750rpm. Yes, these power rating doesn’t seem that compelling on paper but on the road, it does 0-100kmph in sub-10 second, which might not be outright right fast but nor be termed as slow either.

Being a three-cylinder unit, there's just no getting away from the constant hum and vibrations at idle. But move further up the power-band, and the same engine smoothens up gracefully and pulls all the way to the blissful redline without a fuss.

The torque spread meanwhile is nice and in collaboration with the 6-speed autobox, the Mini D makes overtakes and three digit speeds cruising almost effortless. Although, it would have been a perfect package with the paddle shifters on-board but sadly that’s only available on the range-topping Cooper S.

Whereas the most likable part of Mini is its handling, the worst would definitely be the ride quality it boasts. Although the suspension seems a lot sorted when compared to the last generation model as it's less jumpy and rude, but there's no denying that a sense of stiffness is still there, and Mini does let you know about every bad patch on the road, which is certainly irritating at times.

Now, the dynamics. It has been the USP of the Minis and this new generation model is no different, in fact the things have improved. Its body balance is lot improved and there's lesser heaviness on the front wheels like the earlier models, which allows the driver to throw it from corner to corner with much more confidence. The steering is quick and delivers every bit of that brilliant experience Minis are always known for. The body roll is almost non-existent and the chassis that feels so alive and confidence-inspiring that one wishes that the twisties should never end. That brilliant it is.

The Mini, in any guise- petrol or diesel, isn't your typical, everyday hatchback. It’s not the most convenient and practical car you can own in this price. With 30lacs+ sticker, the Mini Cooper D 3-door is an expensive proposition, and remains a car that appeals more to heart rather than the head.