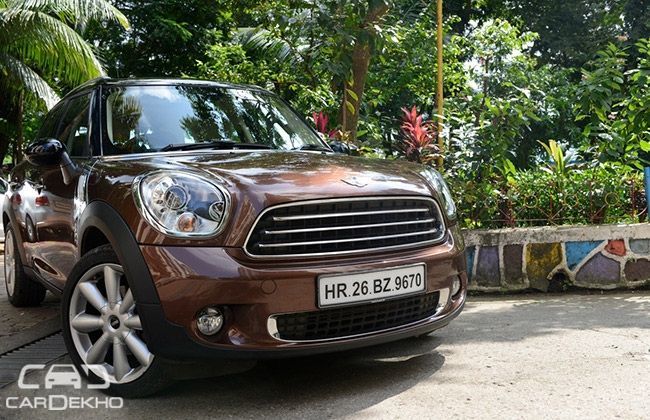 The Cooper Countryman is the first SUV from Mini and still it has compact dimensions. The styling of the Countryman is similar to other Mini hatches. There is not even a single Countryman badging on the SUV and the only badging it has is of Cooper D.

The side metal air scoop wears a prominent-red S badge and even the wheel-on-each-corner means no front or rear overhang. The Countryman is as tall as maybe a Wagon R, as the regular Mini is much smaller. The Countryman D has four-doors and a longer wheelbase than the Clubman or the Cooper.

The styling of the Mini is a derivative of the retro styling. There is a metal ait scoop on the fender and the rear looks a bit lumpy. The Countryman has roof rails and also a spoiler too.

The interior styling of the Countryman is unusual if you compare to other cars. The speedometer is a large circle at the centre with fuel level. The switches are like that in a cockpit. The power window controls are at the centre too. The tachometer is located over the steering wheel and even the key styling is different from other cars.

The in-dash music system is Harman Kadon and the music output is fantastic.  The seats on the Countryman S are well-bolstered and they are largely supportive for your thighs and back.

The head room is sufficient in both the row even for six footers. There is immense space in both the rows and even the boot is large enough to gobble luggage for four for a weekend trip.  The boot opens by flipping the Mini logo at the rear, just like the Volkswagen Polo.

The bells and whistles on the Countryman are fairly limited, as doesn’t electrically adjustable steering and even the front row seats have manual adjustment. Getting used to the controls will take a while.

The Mini Cooper Countryman D comes with a 1.6-litre diesel, but the only concern is that it produces only 112bhp of power. The power is sufficient, however for a vehicle that costs in excess of Rs 30lakhs, it is an expensive affair. The power produced by the engine is sufficient for the Countryman. It produces a torque of 270Nm and the power delivery is linear. Drivability is good and the Mini never feels to run out of steam.

Crank the engine and there is the clatter melodrama especially at cold starts. This however settles once the engine warms up. The NVH levels are fairly low. Overtaking in the city and the highway isn’t a problem. The six-speed transmission is a bit lethargic. Press the throttle and it takes a while to choose the correct gear. Even the gear knob looks like a knight’s helmet. No compromise has been made to the styling even in detail.

Other than compact dimensions, the other USP of the Mini was its driving characteristics. It used to drive like a go-kart and the Countryman despite its larger dimensions drives like one. The diesel engine ensures sufficient torque whenever required and even the steering wheel is heavy, something that most of the driving enthusiasts prefer.

The ride of the Countryman D is good. The suspension set-up is wee bit stiff but still the ride is pliant and most of the road shocks are absorbed by the suspension.  You can feel the stiffness only when you get on extremely bad roads or at high speeds.

The Mini Cooper Countryman D is a good vehicle to procure, as it is spacious, powerful and has good quality. It is fun to drive and even the brand is iconic. The latter is the reason why the price tag is higher. If you need something that is unique than the Countryman is a good choice, else there are several more luxurious vehicles available at this price point.