Published On Jan 13, 2015 By Abhishek for Mercedes-Benz CLA

Mercedes-Benz had a great 2014 and it looks like they are hell-bent on making 2015 even better. The much awaited CLA-Class has arrived early in the year with the launch due soon. We take it for a spin to tell you what to expect! 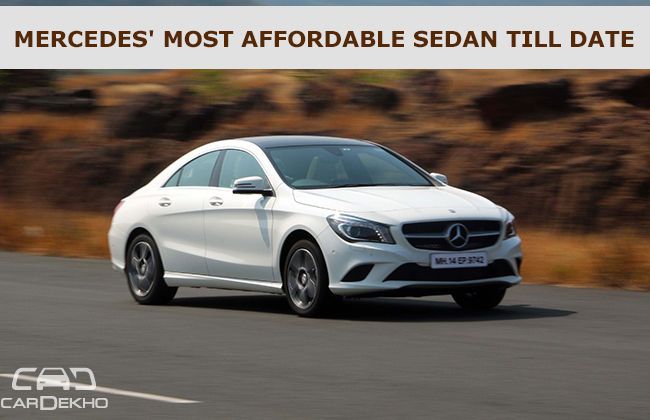 Luxury cars off-late have branched out into so many directions that its almost become impossible to categorize them. Talking about Mercedes-Benz, this manufacturer boasts one of the largest portfolio of models even though it caters to the upper premium segment only. While the C-Class was the entry level Merc to buy before, you now have the A and the B-Class to look at before you move onto the C, which has now almost moved into the E-Class territory. However, neither the A nor the B-Class will suffice the needs of a buyer who is looking to buy a sedan but finds the new C too expensive. This is where the new CLA-Class steps in. It aims to do exactly what the C-Class did when it was introduced, provide a relatively cheaper Mercedes-Benz experience without having to compromise on Mercedes’ inherent qualities. The CLA was first unveiled as a concept at the 2012 Shanghai Motor Show where it managed to generate such a response that Mercedes-Benz wasted no time in putting the car into production. While India already got a taste of the CLA-Class in the form of the godly CLA45 AMG, all the eyes still laid in wait for the relatively mortal and more pocket friendly CLA-Class.

Mercedes-Benz have pretty aptly named the CLA, their style rebel and its its easy to see why. While the steroidal overtones of the CLA45 are missing, the standard car still oozes enough style to make it the ‘fashionist’a of its segment. The CLS-ish design looks stunning thanks to that low, sleek coupe-ish profile.

The front looks similar to the A-Class with those gorgeous swept back bi-xenon headlamps and that imposing grille. From the side, the low roof line, frameless windows and the high beltline creates a strong profile which flow brilliantly into the muscular tail-end. The rear is another masterpiece in itself. The LED tail lights feature an arrow-style arrangement which compliment those lovely twin exhausts and the faux diffuser. I wasn’t a fan of the 5-spoke alloys, but at 17 inches, they fill those wheel arches well.

The optional large panoramic sliding sunroof consists of a fixed polycarbonate cover at the front, a moving element made of mineral crystal and side trims to match the glass look. As such, the glass surface then extends from the front windscreen to the rear window. The car looks fantastic with the huge glass roof. Mercedes has been on a roll as far as the design is concerned off-late and the CLA is another feather in the Germans cap.

The insides as expected are pretty similar to the A-Class and the B-Class, but Mercedes has added some nice touches to make it stand out. You can either opt for an all black interior or go two tone like the one you see in the pictures. All trim surfaces are galvanised, resulting in a metallic finish which gives it a premium look. We especially likes the silver strip running across the centre of the dash.

The display screen stands free and is large enough for viewing under any kind of light conditions. The infotainment system also gets the latest software which makes it more intuitive and user friendly. Maps for the navigation system can now be loaded straight from an SD card which is quite a cool feature.

The instrument binnacle is retained from the A-Class and so are fighter-jet style air-con vents. The air-con unit looks similar, but gets climate control as well. There are storage places in plenty to keep your knick-knacks, but we did find the glovebox to be too small to keep anything but documents or tiny stuff.

Getting onto the seats, the integral front seats are supremely comfortable. Not only do they offer a very sporty look, but also have enough back and lumbar support to make long drives comfortable. And since both the front seats are electrically adjustable, its easy to get the desired driving position quickly.

Getting into the back seats is where the CLA’s sleek, low design causes a hindrance. The low roof-line means one really has to bend quite a bit and mind the head. Once seated there is enough legroom, but for taller passengers once again that low sloping roof is just too close for absolute comfort.

The rear passengers get AC vents too which is a must in Indian conditions, however the high-ish transmission tunnel turns out to be the bane of the middle passenger. As a result, the CLA is most comfortable as a 4-seater at best. Quality of materials is quite good except for a few hard plastics, but what really livens up the insides is the ambient lighting which really looks fantastic once darkness falls. Boot space is a decent 470 litres, but the spare tyre which was removed during the drive will eat into the luggage space a little.

The CLA in India is powered by the same engines powering the GLA. A 2 litre petrol and a 2.1 litre diesel. Coming to the diesel first, the 4-cylinder common rail direct injection unit pushes out 135 PS between 3600-4400 rpm and a maximum torque of 300 Nm between 1600-3000 rpm. Transmission duty is handled by the familiar 7G-DCT dual clutch gearbox, currently doing duty in almost all the Merc’s.

The CLA gets paddles as well, to make shifting a sportier affair, however, the diesel is not the most enthralling unit from Mercedes. Its refined and has decent performance, however still feels a little lacking. Driven normally in city conditions, the diesel is hard to fault, however its not the one to have fun with. Outright acceleration lacks punch, however shifting to manual and keeping the tacho in the meat of the power-band i.e, between 2000-3000 rpm, milks the best performance from this engine. The gearbox can get a little slow witted at times when you really want to have fun with the paddles but shift normally and you will have nothing to complain about.

Getting into the petrol, and getting off the line, you suddenly feel like the CLA has shed a couple of 100 kg or gained a lot more horsepower. Actually its more of the latter. The 2 litre turbo-charged unit makes a much more impressive 183 PS @ 5500 rpm and a similar to the diesel, 300 Nm of torque. More power and the same amount of torque means the petrol is peppier unit of the two. Flooring the pedal breaks traction immediately with the enthusiastic engine making some lovely noises. Gearshifts as a result feel much better as well and that little lag that you feel in the diesel is thankfully missing as well. Not only is the petrol more peppy, but its also the one with better drivability. If you like to drive, then the CLA petrol is an absolute no brainer.

Now this is pretty much the most amazing aspect of the new CLA-Class. Our complaints about the stiff ride quality in the A and the GLA didn’t fall on deaf ears and Mercedes engineers sat about re-tuning the setup for Indian conditions. And initial impressions tell us that they have done a stellar job. The CLA feels extremely pliant on bumpy roads and absorbs undulations with ease. The new absorption qualities have endowed the car with a much more planted feel. While we did not get to test the car at high speeds, we think the CLA should have impeccable high speed manners thanks to the new setup.

Handling hasn’t taken a beating either. While there is a bit of a body roll, the car feels safe and holds its line well should you try to stitch some corners together. Push it harder and you get rewarded with understeer, with the electronics trying hard to keep a check on your enthusiasm. The ride and handling balance is extremely well sorted on the CLA and this we feel is a big plus for the car.

After spending a day with the car, we can safely say that the CLA was definitely worth the wait. It boasts fantastic looks that is sure to turns heads, has some fancy interiors that is not only inviting but boast worthy as well, has plenty of kit and drives quite well too, especially the petrol. Expect the CLA to be in the 30 lakh price bracket with the Audi A3 as its only direct competitor. Of course there are other options for the money but then they don’t get a Three Pointed Star upfront. Keep watching this space for the launch and a full blown Road Test coming up soon!