Published On Jul 08, 2013 By Rahul for Mercedes-Benz B-Class

Mercedes-Benz has switched to an aggressive mode and the company has been flooding the market with several new products. Recently, the company introduced the revised version of its best-selling sedan— the E-Class. Now, it introduces the diesel variant on the B-Class. 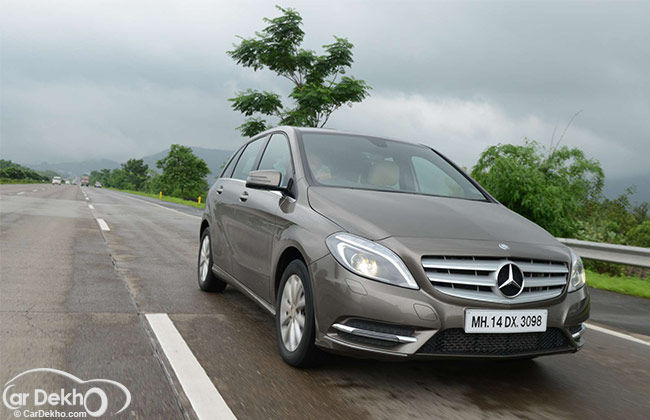 The B-Class was launched last year during the festive season, and the Stuttgart-based manufacturer had only introduced it with the petrol variant.

This time around it has introduced the diesel version of this “Sports Tourer” and we take it for a spin.

Being based on the MFA platform, this was the first front-wheel drive Mercedes-Benz for Indian car market. Launched at the Last Frankfurt Motor Show in 2011, the B-Class made its way into India in a year’s time.

Our first experience of the B-Class was when we drove it the left-hand drive version on India’s only Formula 1 circuit— Buddh International Circuit— in Greater Noida.

Mercedes-Benz is going away from its conventional grille with the star on the top as all the new vehicles are now gets the Avantgarde front grille that features the large central star. The new set of LED design is carried forward on the B-Class, A-Class and even the CLA.

There is no difference in design when you compare this to its petrol sibling, except for 16-inch alloys instead of the 17, which we have seen on the petrol and the CDI badge.

This is where you will find some changes on the B-Class diesel. First and foremost, it has a wooden panel finish on the centre console, the sunroof has been taken off and other features like reversing parking camera have also been removed for reducing the cost.

Mercedes-Benz is applying its strategy of the A-Class, where the diesel variant will have lesser features and will also be priced below the petrol.

So, a B-Class diesel owner will get all the must-have features that a premium vehicle gets.

The space of the B-Class is one of the biggest selling points, as it can comfortably seat four with sufficient knee room and head room in both the rows.

The boot of the B-Class is also more than large to gobble weekend luggage for four.

Possibly more could have been added, if the spare wheel was located under the vehicle.

No issues with the quality, as the fit and finish and even the look and feel of the materials is like any luxury vehicle.

Mercedes-Benz has plonked in a 2.2-litre oil burner on the B-Class, however there is one issue. This engine produces only 108bhp, which does sound a bit too less, when you are in the market to buy a vehicle in excess of Rs 20lakhs. This could discourage the buyer from even considering this option.

The engine is the same one that we have seen on the C-Class, but it has been detuned. The NVH levels on the oil burner are fairly low, and there is no prominent turbo lag too. This is due to the fact that the turbo boost on this engine has been reduced, which is why the power got a hit when it comes to numbers. It lacks that punch one is looking for in a diesel engine.

The seven-speed dual clutch transmission on the B-Class is good, with shift timings better than the conventional 7G-TRONIC. However, it is still wee bit slower than a double-clutch transmission. Slam the throttle and the transmission hesitates a bit before engaging the correct gear.

Mercedes-Benz has designed the B-Class for better ride than handling and it does it well. The designers at Stuttgart have tuned the suspension to adsorb most of the bumps and jolt on the road and avoid it from filtering into the cabin.

The ride suppleness of the B-Class is as good as any three-pointed star. As the diesel engine has more capacity than the petrol and it is also heavier, the front suspension on the diesel is stiffer; hence the smaller size tyres do a better job of soaking the bumps.

The B-Class is long and even tall, hence some amount of body roll is expected. Still the vehicle does a fine job, when you push it around a corner. The ESP kicks in the moment you start losing your hold. The steering wheel is also light and has a good response too. It doesn’t feel slack anytime.

The diesel version of the B-Class gets lesser features than its petrol sibling. This has helped Mercedes-Benz to reduce the cost of the vehicle. But as the B-Class is still a CBU, it is an expensive affair to own it, especially with a diesel engine that produces only 108 horses of power.

The company has announced the pricing yet, but we can expect it to be a shade above Rs 20lakhs (ex-showroom price).