The petrol Ignis AT promises to blend funk and functionality in a city car. Is it? 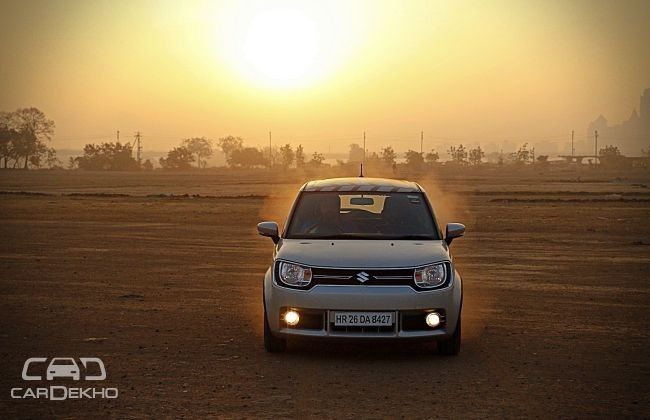 In a segment that’s been bombarded with options, Maruti has found a way to stand out, with the Ignis. Apart from some segment first features, it’s also the only car to offer both, its petrol and diesel engines with manual and automatic transmissions.

Given the returning and rising popularity of petrols and automatics respectively, we took the Ignis petrol AMT off for a spin to find out if this functional powertrain can offer fun too.

The Ignis’ design is quite polarising and deliberately so. With it, Maruti is targeting younger buyers, who want need something that stands out. That’s also the reason why there are so many customisation options. Its 3,700mm length is shorter than the Grand i10’s, but it’s both taller and wider than the Hyundai. This, when combined with the rather menacingly styled front fascia, gives the Ignis great street presence. Since, now you can have an Ignis AT in the top-end Alpha variant, features like the LED daytime running lights and headlights will further boost its looks.

As far as styling goes, it pulls off the crosshatch look effortlessly with its tall bonnet, flared wheel arches and boxy side profile. The 15-inch black alloy wheels are a must have, not only because they look good, but because the wheel cover of the Delta (only variant apart from the Zeta to get an AMT) looks out of place and unflattering. Speaking of which, the rear end of the Ignis is not a design strong point. The chunky rear bumper gives it a nice stance, but the 175-section tyres look too thin as a result.

The rear windshield is uniquely shaped, but because it sits so high up, rearward visibility for the driver isn’t ideal.
There’s no doubting the Ignis’ credentials as an attention grabber, for reasons right or wrong.

In many ways, it’s a modern take on the Ritz, which wasn’t universally appealing itself. However, its looks are a rebellion against conventional/safe designs; something that may just click with the nonconformist millennials.

Suzuki has been consistent in keeping things quirky, as even the interior is out of the ordinary. The tall roof and wide opening doors mean getting in and out is easy. Every switch is laid out ergonomically and you quickly feel familiarised with the cabin.

It’s intriguing how a car aimed at the tech-savvy generation is also senior citizen-friendly. The black-off white dashboard has a unique shape, and you sort of look down upon it like you would in a traditional SUV. The instrument cluster is minimalist, but informative enough and a peculiar touch is the speedometer, which looks like it’s been borrowed from a motorcycle.

A shortcoming, though, is that the cabin doesn’t feel premium. The doorpads, for example, are very thin, flex too easily and don’t belong in a car that will cost over Rs 7 lakh on road. The quality of plastics on the dashboard also feels flimsier than we would have liked. And, while the Alpha grade gets airplane cockpit-styled switches for the automatic climate control, the Zeta only gets manual air-conditioning, the console of which, awkwardly juts out of the dashboard.

However, the Ignis is good on practicality and there’s adequate storage spots up front for bottles or knick-knacks. The seats are supportive and there’s ample room all-round even for bulky and tall occupants. The rear seat is plenty accommodating too and there’s a remarkable amount of space under the front seats to tuck your feet in, but seating 3 will be a squeeze.

The rear seat doesn’t fold flat, but does split 60:40 and the 260-litre boot is standard fare for the segment, though, the loading lip is quite high.

Opt for the range-topping Alpha variant and you have features like auto AC, LED projector headlights and the SmartPlay touchscreen infotainment system, complete with Android Auto and Apple CarPlay. While you'd once have to miss these features as the top-end Ignis wasn't available with an AMT, that's no longer the case with the introduction of the Ignis petrol and diesel AMT Alpha. The 2-DIN radio of the Zeta (variant tested) gets Bluetooth and AUX connectivity, but the system itself feels outdated.

Even the six-speaker sound system should have offered better audio quality for a car that’s aimed at young buyers, for whom, entertainment systems are of great importance. Overall, this is a no-frills machine, barring a push button starter and some other essentials.

Maruti’s K-series 1.2-litre petrol engine has proven its mettle as an engine that’s refined, efficient and peppy. That nature remains fortunately untouched. Throttle response is immediate and while it is quick to rev, there’s enough performance offered to quickly get to city speeds even below 2,500rpm.

Apart from the engine’s great driveability, credit for this goes to the light weight of the car (petrol Ignis weighs no more than 865kg). The light weight, in no small part, also contributes to the great fuel efficiency. We managed to get 14.65kmpl in city traffic and 21.89kmpl on the highway during our road tests.

Credit where it’s due, Maruti has shown that it knows how to engineer its automated manual transmission equipped cars just right. The Ignis’ creep function works perfectly in bumper to bumper traffic, though, if you’re on an incline, especially while reversing, be sure to keep the handbrake handy.

The gear changes are quite smooth by AMT standards. Upshifts/downshifts are noticeable, even at low speeds, but it’s nothing unexpected. You can adapt to its behaviour quickly, even if you’re new to automatic transmissions. The driver and powertrain chemistry will form quickly. Additionally, not only is it responsive when you want a quick downshift, it also revs up/blips the engine automatically before the gear change to reduce engine wear and smoother acceleration. Even the manual mode works very well, though, the gearbox really is intuitive enough already.

This may not be a powertrain designed for a driving enthusiast, but it’s actually good fun and manages a respectable 0-100kmph time of 13.69 seconds. Kickdown response is pretty quick too and it goes from 20-80kmph in 8.21 seconds. Figures aside, the Ignis enters triple digits speeds surprisingly quick and while it’s the same engine as many other Marutis, somehow, it sounds the best under this car’s clamshell bonnet.

The car’s suspension setup is quite sporty and the low speed ride quality has a stiff edge to it. Stability is never an issue and you can take most road imperfections on by simply darting right through them. Bigger potholes will make their presence felt, but even if you hit one hard, the suspension remains fairly silent. At 180mm, ground clearance is impressive and better than even the Mahindra KUV100’s, the results of which are felt most when tackling speed bumps.

The steering is an absolute gem. It’s light enough for city use, but is direct, well-weighted and changes direction like a go-kart! There’s not much feedback, but it’s not an experience dampener. The brakes offer good bite and our tests saw a 100-0kmph time of 3.19 seconds in just under 44 metres. That said, panic braking at high speeds did see the car get a little unsettled, which can be attributed, in parts, to the low-roll resistance tyres.

All variants of the Ignis come with dual front airbags, ABS with EBD and ISOFIX child seat mounts as standard. The Zeta variant adds rear parking sensors, a rear defogger and a rear wiper, while the Alpha adds a reversing camera.

The Ignis petrol AT can be had in the Delta, Zeta and Alpha grades. The Zeta's added cost over the Delta gets you goodies like rear parking sensors (strongly recommended), fog lamps, alloy wheels, two additional speakers and a push button starter. For these features, the premium isn’t much, especially when calculated in EMI terms. If you’re getting the Ignis AT, go with the Zeta since the added kit is good value for the price. You can also pay around Rs 78,000 over the Zeta for the Alpha, to add auto AC, a reversing camera, touchscreen infotainment and LED headlights. These are nice to have features and the premium is justified but the Alpha's additional features aren't need based.

At its price of Rs 5.72-7.01 lakh (ex-showroom Delhi), the Ignis petrol AT offers great value, especially when you consider the standard safety kit.

Yes, the interior definitely lacks the finesse in quality you get with say, the Grand i10, but it’s a practical and efficient car that stands out in a crowd too. Most importantly, it’s a fun car to drive, one that’s perfect for slicing through city traffic and a machine that’s charming enough to really make you want it.