Published On Aug 18, 2012 By Rahul for Mahindra Verito

Pondicherry might be India’s French connect city, but the Logan is the first successful French car in our market. Prior to this, we have had the Peugeot cars, but they never made a successful Indian story. Now even Renault has began its second Indian innings without any local joint ventures. Still the Logan has been the most successful French sedan in India and now it is sold under the Verito badge— that is manufactured in Mahindra’s facility. 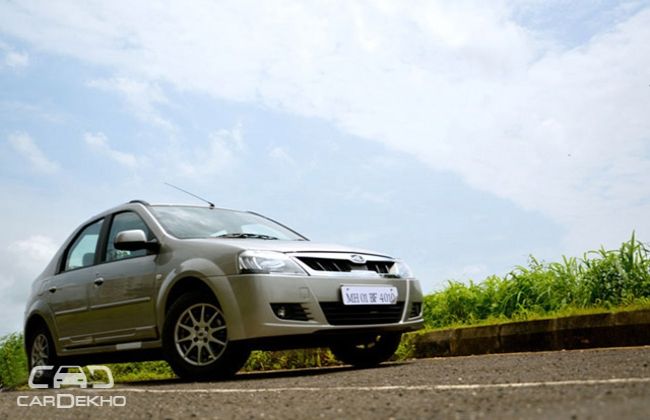 The Verito had got some minor changes when Mahindra had renamed it. Now, the C segment receives a mid-life facelift to make it look more polished and premium than before. Has Mahindra pulled it well? We find out as we review the titivated version.

The aim behind the Logan project was to make it the most affordable car for the European market.  That’s why the design was boxy with not many curves or creases to keep the cost of the moulds low, thus reducing the cost. But multiple changes have been changed since the time Mahindra took over this sedan and rebadged it as the Verito.

Recently, the Verito got a facelift with the new Mahindra signature grille with a change in its front bumper design as well. The headlamp design has also undergone some minor alterations. Even the wiper blades are set for a right-hand drive car, and the hood gets prominent strakes making the Verito look more appealing.

The silhouette gets the body hugging roof rails and blacked-out pillars, which have now formed a part of Mahindra’s design language. Even the boot gets strakes and chrome to make it look attractive, rather than dull and boring. Also gone are the small outside rear view mirrors.

Interiors have also been completely revamped. The Verito gets a new in-dash music system, and the centre console gets a carbon-finish panel to make it look attractive. The new black steering wheel doesn’t feel cheap like the earlier beige one and the entire combination of black and beige is more appealing now. The quality of the plastics also looks and feels a tad better than the Logan.

Most of the bits of the Verito remain untouched. The instrument cluster, the circular air-con vents, the seats and even the steering wheel design. The power window switches are moved from the centre console to the driver’s side. The seats are still the same comfortable ones with sufficient space for your head and knees in both the rows. Even the boot is large enough to gobble most of your luggage.

When you sit in the driver’s seat, you sit high and also the visibility is good. Even the outside mirrors are larger and are electrically adjustable. Only the lock for central lock is difficult to access, especially when you are accustomed to locks near the door latch.

The Verito gets two engine options, one being the petrol and the latter being a diesel. We drove the 1.5-litre diesel engine that churns out 65bhp and a peak torque of 160Nm. This is the same frugal oil burner that also powered the Logan. This is the second most popular diesel mill after Fiat’s multijet.

The NVH levels on this engine are low and it is fairly refined. There is no clattering business when you crank start the engine and neither when it’s idling. Power delivery is fairly linear and there is no turbo leg either. Driving around in bumper-to-bumper city traffic and on highway is a breeze.

The diesel engine comes mated to a five-speed manual transmission. To our dismay, the shifts on the box are tad rubbery. The gearing ratio is also spot-on as the Verito pulls cleanly despite being in a higher cog. Overtaking is also not a concern.

Logan had a plush ride. With no changes being made on the underpinnings, the Verito retains similar dynamics. The ride suppleness is still composed as most of the road shocks are absorbed up the suspension. The Verito smoothly glides over potholes.

The Logan’s agile handling characteristics are transferred to the Verito as well. The car is planted and inspires confidence in the driver when driven on straight roads or pushed around corners. There is not much of body roll and the steering is precise at low speeds. At higher speeds, it does feel a tad slack. But that’s about it.

The Logan was an excellent product that was a great value for money proposition. It was the looks and the not-so-good interior plastic quality that didn’t help its image. Mahindra has done its homework well in not just improving the quality of the materials about also making it look more stylish than before.

Thus, the Verito raises the bar for Mahindra and is certainly is a good C segment sedan to procure, especially the diesel.