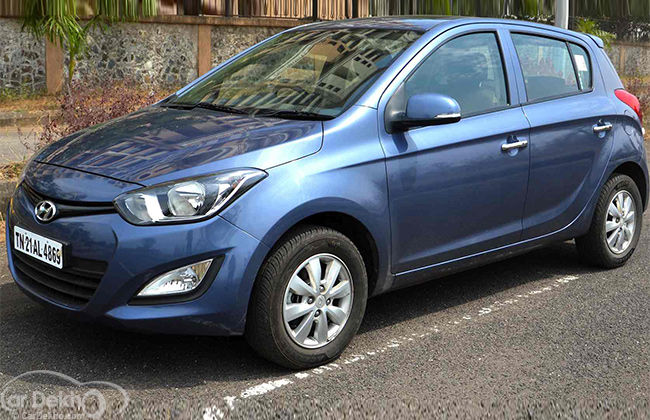 Hyundai has been giving Fluidic treatment to all its models and i20 also gets moulded in this design. The i20 was launched in November 2008 and the i20 gets its mid-life facelift.  We had already reviewed the diesel car; this time we get our hands on the petrol version. i20 has received a facelift treatment; hence there isn’t much of a change in the design.

The same crisp swage line still runs below the beltline. The front has changes major undergone. New hawk-like headlamps are there on the i20, with a new fog lamp design, and a new hexagonal front grille that melds well with the new crown hood. All this makes it similar to its family styling, as the Fluidic design is now uniform across all Hyundai cars except the Santa Fe. The SUV does get this design on its next upcoming third generation.

The silhouette of the i20 remains untouched, while at the rear the only change is the tail lamp cluster. The shape remains the same, but the positioning of the lights has changed. Apart from this, rest of the kit remains identical. The alloy wheels are also changed, but we personally liked the older alloy design.

Interiors of the i20 were always plush and now they are no different. The feel and fit and finish of the plastics are good for a hatchback and it does feel swanky.

Hyundai cars are generally feature loaded and the i20 was the first amongst them. After this facelift, the i20 gets a few more additional features added to its tub.

The i20 now has keyless entry, push start-stop, reverse parking camera and also the top end of the i20 gets six airbags. The space is very much similar on the i20, as the front row seats are large and hard making it comfortable for longer journeys.

Whilst the second row seats do not have enough thigh support and a bit tight on knee room also. The boot size is fairly decent for a hatchback.

The 1.2-litre petrol of the i20 is the most commonly sold petrol engine. It churns about 80bhp of power and now gets VTVT, which is variable valve timing. The advantage of the variable valve timing is that it improves performance without denting your fuel economy. The NVH levels of this engine are fairly low and the engine is hardly audible.

The engine struggles to pull at low engine rpm and one need to downshift to make those quick overtaking manoeuvres. This is the biggest and only let down of this engine. The i20 is also available with a 1.4-litre petrol engine that comes mated only to an automatic transmission and also a 1.4-litre oil burner.

The 5-speed manual transmission that comes bolted to the petrol i20 is slick, with positive and short throws. Even the clutch pedal is light and this reduces driver lassitude in bumper-to-bumper traffic.

The ride of the i20 is fairly sorted, as it is smooth and composed at low speeds. At high speeds however does get a bit jittery. Most of the jolts and bumps are soaked by the suspension.

The long suspension travel affects the handling. Not that the handling is bad, but it cannot match the alacrity of its European competitors. The steering wheel is also light and feels artificial, even the brakes feel soggy but they do bite progressively.

The i20 has always been a good B+ segment hatchback to buy. Now with the added bells and whistles, it is the most loaded car in this segment. So, if you are looking for a vehicle that looks good, has loads of brownies, has low cost of ownership and good resale value, your search should come to an end on the i20.