Seven-seater SUVs for the whole family don’t need you to spend a fortune anymore. Who has got the formula right? Hyundai or Tata? 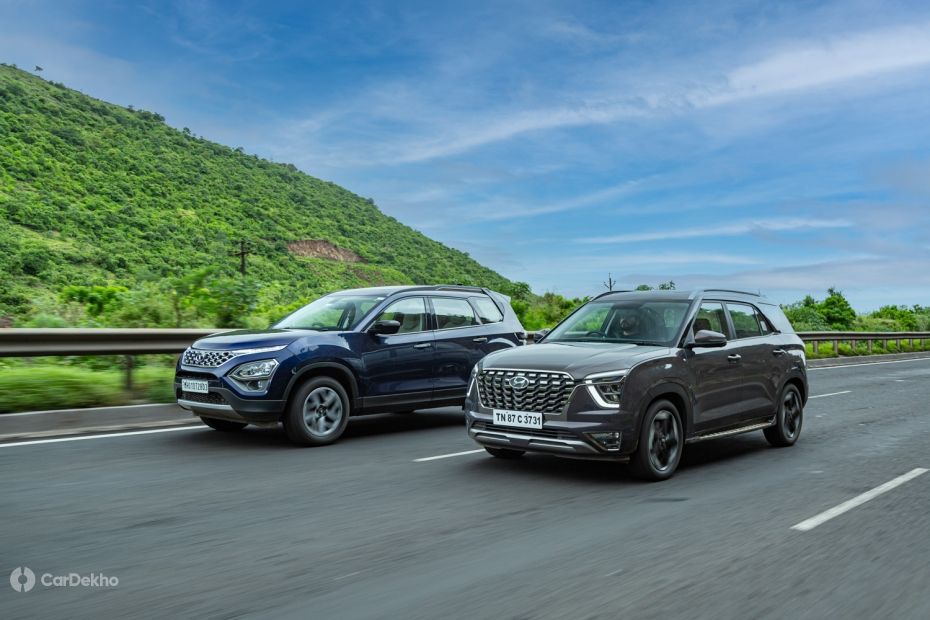 Both SUVs lined up for this comparison are banking on more than their own strengths to grab your attention. On one end is Tata’s ‘Safari’, a name that has some serious gravitas (pun intended). On the other is Hyundai’s Alcazar that banks on the success and goodwill of its younger sibling, the Creta. And while these aren’t exactly direct rivals, it’s worth asking if the Safari is worth its additional Rs 2 lakh on-road price.

If you enjoy making a statement, having eyeballs on you and generally a whole lot of attention, the Safari is your car. It builds on the already generous proportions of the Harrier. The sheer size of the Safari ensures it has a solid street presence. Next to the Alcazar, the additional size is hard to overlook.

On paper, it’s the Alcazar that has the larger wheelbase. But the design seems to follow a more urban, sophisticated flavour compared to the outdoorsy and rugged theme the Safari has.

Both are kitted out to demand attention. The Alcazar gets a large ‘dark chrome’ studded grille, triplet full-LED headlamps, and concept car-like 18-inch alloy wheels. In comparison, the rear is a bit plain.

It’s also at the rear where the Safari distinguishes itself from the Harrier. Much like the Alcazar-Creta duo, the front-end design of the Safari is almost identical to its five-seater sibling. The snazzier tri-arrow detailing on the grille and the larger 18-inch alloy wheels stamp the Safari’s authority.

Make no mistake, both ensure that your neighbors know you’ve spent over Rs 20 lakh on a vehicle. The Tata ekes out a lead for its larger footprint.

Hyundai is known for spoiling us silly with next-segment features. They’ve done no different with the Alcazar. The Creta's potent feature mix was a great place, to begin with. But with a few key additions, the seven-seater makes for a strong value proposition. On the other hand, Tata seems to have focussed on ensuring utility. There's practically no feature that the Safari gets but the Alcazar doesn’t.

There’s a lot in common between the two:

The Alcazar punches a strong lead when it comes to offering bang for your buck with goodies such as ventilated seats, wireless charging, and connected car technology. The smaller Hyundai features front parking sensors, a side step (in the automatic variants only), and a 360° camera -- all of which the bigger Tata really needs.

It also has the upper hand when you start comparing the infotainment experience.

With larger real estate, quick touch response, and an intuitive user interface, the Alcazar’s touchscreen easily betters the Safari’s. A lower screen resolution and laggy interface don’t help the Tata’s cause. Hyundai goes one up in instrumentation as well, offering a fully digital display with a high-resolution screen and configurable themes. Tata has neatly integrated the Safari’s screen, but the fonts at the bottom seem too small, and the analogue speedometer looks a bit low-rent at this price point.

The Safari pulls one back in the audio department. The JBL system on offer here truly delivers on expectations, whereas the Bose audio on the Alcazar sounds flatter in comparison.

From a safety standpoint, both SUV’s top-spec models are loaded to the gills with tech. Here’s a quick look at what’s on offer:

Note that neither the Safari nor the Alcazar has been crash-tested by an independent authority like the Global NCAP.

The Safari makes a smashing first impression. Sure, the white upholstery is going to need care to stay clean, but it ensures an already large cabin feels EVEN larger. Compared to the Alcazar, you sit higher in the Safari’s driving seat. Couple that with the large windows, and the view is commanding. However, it’s the cabin width that plays into the Safari’s favour the most. A narrower cabin and black-tan colour scheme make the Alcazar feel a lot cosier. It has its advantages in a flatter dashboard, which liberates a little more knee room should you need it.

Getting in and out of the Safari is a bit of a task, especially for the elderly. Consider installing side steps if your parents/grandparents will be in tow frequently. Once in, the Safari again spells out its advantage. The contouring on the captain seats is pronounced and holds you snugly. Those with a heavy build might ‘spill out’ of the seats, but they remain comfortable nonetheless. In terms of actual space and sense of space, the Safari takes this round quite easily.

Hyundai is countering this with a whole lot of feel-good features. This includes a central armrest with storage, dedicated wireless chargers, fold-out picnic trays with pop-out cup holders, and sun shades. Just like the front row, you’d want more cabin width here. Compared to the Safari, the seats are shorter, and therefore, don’t support your shoulders as much. The overall profile of the seats is quite flat. Space here isn’t palatial; even with the seats pushed all the way back, there’s only as much space as a Creta.

The Alcazar lets you tumble the second-row captain seats with a single tug at the lever. This ‘one-touch-tumble’ feature is limited to the bench-seat (seven-seater) variant of the Safari. The captain seats on the Tata recline and slide forward, but it’s quicker to simply walk in between the seats and get to the third row.

Once you’re seated, the added space is immediately apparent. While the Alcazar’s third row is best left to kids, adults can fit into the third of the Safari for shorter journeys quite comfortably. Another advantage for the Tata is the positioning of the AC vents, placed at shoulder level instead of waist level in the Alcazar.

In lieu of the crunched third row, the Alcazar offers a boot that’s actually usable when you’re travelling full house. In fact, claimed capacity is more than twice that of the Safari: 180-litres versus 73. In the Alcazar, you can easily accommodate two small trolley bags, whereas the Safari takes no more than a couple of backpacks or duffle bags.

Folding the third row away means both SUVs will happily chug down a week’s worth of road trip luggage without breaking a sweat. If you intend on using the Safari or the Alcazar as a 4- or 5-seater with a large boot, it’s the former that offers a better balance of cabin and boot space.

Family That Drives Together..

Hyundai is offering the Alcazar with a 2.0-litre petrol alongside the 1.5-litre diesel. On the other hand, Tata offers a single 2.0-litre diesel for the Safari. Both SUVs offer the choice of a 6-speed manual and a 6-speed automatic gearbox. We’ve tested the diesel automatics for this comparison. Here are a few points that you should know:

Testing both these SUVs back to back reaffirmed a belief. These two seven-seaters are for completely different people. Let’s break down why you should be considering either one of them.

Reasons to consider the Alcazar begin with its stellar feature list. Even if you do not wish to spend a lot, the base-spec Prestige variant offers solid value compared to a similarly priced Safari. Engine options on the Alcazar suit a relaxed driver. They aren’t particularly exciting, but should keep you happy with good drivability and fuel efficiency.

The Alcazar should also rank higher on your list if you mostly travel inside the city. Disadvantages come in the form of a second row that isn’t as spacious and a third row that’s best suited to kids. It also offers a larger boot with all rows in place.

The Safari’s lure is down to two broad things: the way it drives and the space it has on offer. If your next SUV is going to be your road trip companion, you will enjoy being behind the wheel of the Safari a whole lot more. Similarly, if you’re chauffeur-driven and need the extra room in the second row or a family man who needs more room in the third row for adults, it’s the Tata that delivers here. The obvious sacrifice is luggage space. Also, at this price point, Tata could’ve bundled in more features, which would’ve justified the Safari’s bigger price tag better.

Picking between the two is actually quite easy. The Alcazar’s fuel-efficient, feature-rich, but slightly low on space. On the other hand, the Safari is big on space and performance, but down on features.