A car's success in India is also credited to the after sales and service that the car maker gives for it. Buying a car is one aspect and maintaining it is another. A car model or brand having a good strong after sales and service network sells well and Maruti Suzuki India for that matter is a big live example in India. The after sales for the car that we are talking is for the Ford Figo that we have been driving and so far have not encountered any issue with. The Figo TDCi Diesel has been with us for a long time now and now we would also like our readers to know how actually the Figo is serviced at the Authorized Ford Service. Read on to know everything on the Ford Figo Major Service (20,000kms) from the owner’s point of view. 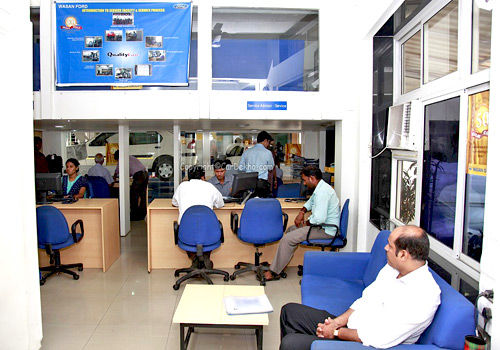 So far we have spoken about the Ford Figo's interiors, its engine and technicalities, we have also spoken on how the Figo drives and handles and now in its time for Ford Figo to visit the Ford Service for a major service that needs to be done at around 20,000kms. Now Ford has something that they call as Quick Service, in this service the complete service procedure on the Figo is done in 90 minutes flat and we tried the Quick Service at Wasan Ford in Mumbai.

The Figo we drove had already fought the battle on the Mumbai roads and the monsoon waters that it drove through so far. We booked a servicing appointment at Wasan Ford.

On the scheduled date we drove in the Figo and waited with it to see how Quick the Customer Service was done and also wanted to see if it really was done in 90mins flat. At Wasan Ford Mr Muneeb Punjabi (Service Manager) greeted us and the Figo was taken in for service. This being a major service that goes through a 8 step service schedule.

The car is inspected initially physically on ground and then put up on the ramp. The race against time begins. We have 2 Wasan Ford service technicians working on our Figo. Initially the battery terminals are disconnected. The Air filter element is replaced (Rs. 250) we are also shown the old element that is fully clogged with dirt and dust. The Battery gravity (Charge) is checked which seems to be ok on our Figo. Windshield wash fluid is also tanked up in its container costing Rs. 54. DOT4 Brake oil is also filled costing Rs. 557. Oil filter is replaced that costs Rs. 348. The Diesel filter is taken out and diesel left in it is inspected for any water body and then washed and cleaned. We are told by Ford technicians that the Diesel filter is only to be changed at the 40,000 Kms service. The engine coolant is inspected but does not need a top-up on our Figo. The next routine is to grease the doors, a layer of fresh grease is applied on the hinges, and door lock assembly and the bonnet latch along with the boot lock.

Time is ticking but the Ford guys doing a fine job so far. The Figo is hoisted up on the ramp. All four wheels are removed and inspected then taken for alignment. Weights are added or removed as per requirement. While the wheels are out, the Ford technicians are busy dismantling the front discs and the rear drum brakes. The brake liners and pads are checked for their wear and tear and rubbed with sand paper so that turn ruff and that’s how they work better while braking. It’s time now to for the engine oil to be replaced. The engine oil drain bolt is removed with the car raised up and all the oil is allowed to fall out down in the oil sump collection unit that is placed under the raised ramp. In the mean time the steering linkages and the suspension joints and any under body damage or abnormalities are inspected and our Figo seems to be fine from down under to the Ford technicians. After all the engine oil is drained out the drain bolt is put back and the Figo is lowered down after the wheels are put back and the tyre rotation is done and the stepney is used on the front while a rear tyre goes in the boot in place of the stepney. Fresh engine oil is filled into the engine; the engine oil costs Rs. 852. Now that theFigo is back on the ground the technicians check the headlight level and all the other electricals including the tail lights, turn indicators etc after the battery terminals are connected back. We are also informed that by removing the battery terminals and putting them back puts the brain of the car ie ECM (Electrical Control Module) into a self test calibration that in simple terms refreshes all the sensors and electrical modules on the vehicle. We noticed that the DTE (Distance To Empty) on our Figo was 193Kms before the terminals were removed and when they were put back the DTE read as 234Kms which means the ECM rectified the error and read out the proper DTE reading. A technician gets into the Figo and checks the AC cooling and also sets the radio stations on the music system along with the power window check.

The job is done in the Quick Service terminal and the Figo is then taken to the wash bay where it will be pressure washed with Diesel and then with liquid car shampoo. The wash process is also done on a ramp so that the under body, engine bay can be washed properly. After one round of pressure wash theFigo receives a coat of car shampoo and again pressure washing is done to remove all the dirt. Air jet is used to remove the water and other dust particles from inside the cabin. The carpets and the floor mats are also taken out cleaned and washed then dried using the air jet.

The Figo now looks very ravishing after the jet-shower bath that it got and is ready to be taken to the polish area. Here polish experts first wipe dry the body panels of the Figo. On the cleanly wiped and dried Figo a coat of polish is applied on the body panels, tyres and also on the dashboard. This is known as One Step polish treatment and we are told not to wash the car for the next two days so that the polish coat can settle on the car. The Figo now looks much glossier and due to the bright red color shade looks very nice with the polish done. The One Step polish is for Rs. 350. The Figo is taken for checking the tyre pressure.

With the complete service now done we look to our watch and still have about 7 minutes to spare for the 90minute to get over which is utilized in completing the billing process. Our total bill for the major service stands at Rs. 4639 that includes Rs. 2358 for the spares and consumables including oil etc and Rs. 1930 as operation amount ie Labor charges. We complete the billing procedure and are issued a gate pass. To our surprise the complete Quick Service procedure is over in 90minutes flat and our sparkling red Figo is ready to be driven off.

We are told that 15 cars are serviced at the Quick Service bay in a day. As we mentioned a success of any car is also owed to its after sales and service and after going through the quick service on the Figo we are more than sure that Ford has a very good after sales support and service team deployed to take care of the Figo.

With this service report we have tried our best to bring forth the actual service procedure that is carried out on the Ford Figo from the owner’s point of view.