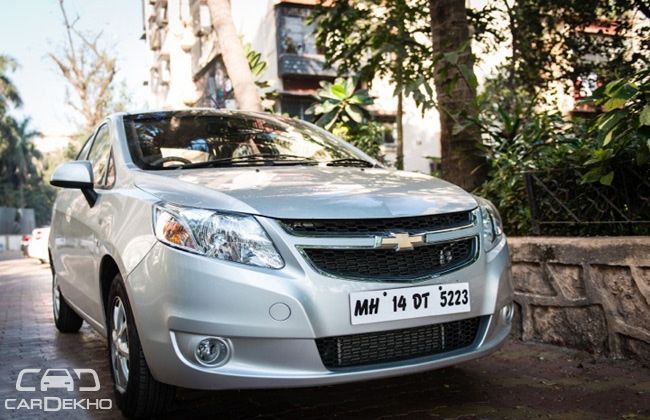 Riding on the success of the Beat and the Cruze, Chevrolet India introduced the Sail hatchback and sedan replacing its aged U-VA and Aveo. The Sail hatchback has been here for a while and now the Sail NB makes its entry. We were impressed with the space and comfort of the U-VA and we were expecting the NB to be more pampering with extra features and comfy. We take a quick spin in the Chevrolet Sail NB to find out how good is the new Sail NB.

The Chevrolet Sail NB’s design is similar to that of the Sail U-VA. The snout gets the stereotype front grille with the large central golden bowtie Chevrolet logo.

The black honeycomb-mesh grille adds up to the styling, as the front headlamp amalgamates into the design making the entire combination look like a smaller version of the Cruze. The front fog lamps slot has been craved into a slot that gives the front bumper a more aggressive stance.

The silhouette of the Sail NB gets a sharp swage line that runs parallel to the beltline. The prominent rocker and flared wheel arches, the high metal to glass ratio gives it a stance and makes it look taller. Maybe, a chrome strip on the beltline could have added some more glam to the Sail’s side profile. The rear does somewhat remind of the Aveo, which can be called as its predecessor.

The instrument panel of the Sail NB has been crafted for simplicity than fancy styling, which makes it the opposite of the Beat. It is more of a practical vehicle for the mind over matter type of people.

The design and placement of controls has been done ergonomically, except for the centrally location of power window switches. The fit and finish is good, while the plastic quality could have been a tad better, at least the feel. The Bluetooth connectivity of the integrated music system has a bit of issues, and it does hang sometimes.

The U-VA had spacious interiors and the same USPs have been carried further into the Sail U-VA and NB. The front row seats are comfortable, but more importantly spacious. Slide into the rear seats and you will not be disappointed.

Three six footers can comfortably sit in the Sail NB’s second row without any squeeze. Even the central tunnel doesn’t intrude and GM has taken the measures to flatten it.

Even the boot of the Sail is large enough to accommodate large for four to five people for weekend trip. There are a lot of cubbyholes and other stowage places in the cabin as well.

The Sail NB is available with two mills one is the 1.2-litre petrol while the second is the 1.3-litre multijet. Both these engines also impel the U-VA also. The petrol produces both 85bhp of power and 113Nm of torque, while the diesel churns out 76bhp and 205Nm of peak torque. The diesel is definitely the pick of the lot as feels peppier and is also drivable.

We drove the diesel mill and we were impressed by its drivability. We have been smitten to this 1.3-litre engine, which is India’s largest selling diesel engine today. The car pulls cleanly once the engine spins above 2000rpm and there is good enough power to make those overtaking moves. The power delivery is fairly linear and the oil burner has a strong mid range. The NVH levels could have been a bit lower as well. The petrol and the diesel both transfer power through a five-speed manual transmission. The gear knob is small, which reduces the throw. The shifts are good, however they do feel a bit rubbery. One of our team members fell in love with the size of the lever and the throws.

The Sail has a sweet spot with good ride and decent handling characteristics. The engineers at General Motors have done a fabulous job by tweaking the suspension as the Indian road conditions. The Sail does have a smooth and settled ride. It doesn’t feel frazzled at high speeds. The suspension absorbs most of the bumps and the occupants do not feel unsettled.

The handling of the Sail is decent and it doesn’t feel nervous at high speeds. The ground clearance is also good enough and even the steering weighs up well. It is just that the turning radius could have been a bit smaller, considering the size of the vehicle.

The Sail NB is an affordable and practical sedan as it has good space, decent design and features, drivable and frugal engines. It is the quality that we aren’t impressed with some plastic bits and also the interior styling could have been a bit trendier. The Sail NB is a good option to buy in the C segment, if you need something that is more of mind over matter.