Published On Jul 15, 2011 By CarDekho for Chevrolet Beat

With the recent rise in fuel prices the demand for Diesel cars has shot drastically, many car manufacturers are getting diesel versions of their models. The small car segment has few Diesel options and General Motors is taking advantage of this by introducing the Diesel version of their successful small car the Chevrolet Beat. Its been 16 years for GM in India and its journey has been with ups and downs. Things have never looked so good for GM India and they want to make the most of it by getting the Diesel version of the Beat to show their supremacy in the small car segment. 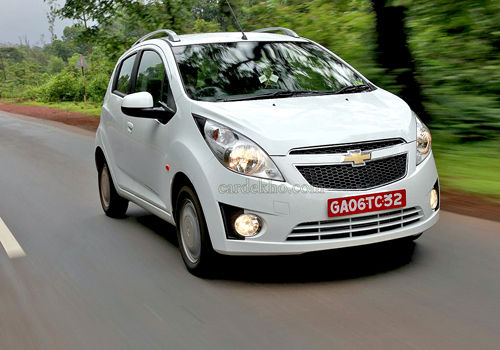 The Chevrolet Beat is currently available in 1.2liter Petrol and a LPG version. Things have changed since the Beat was launched about two years back and GM India too has tasted success in this period, they also invested heavily in setting up a brand new plant at Talegaon which is where the Beat’s diesel engine and the car will be built. GM India also has a plant at Halol in Gujarat.

Getting the facts in line, the Beat was seen in the Hollywood movie `The Transformers` as a concept vehicle, not many vehicles make it to the production line looking exactly as they did in their concept version but the Beat is an exclusion. The concept Beat was shown to the media in 2007 and mostly all the designing stayed intact on the final production version of the Beat.

The Chevrolet Beat has always been a very futuristic looking car. The Beat Diesel is not cosmetically different from its Petrol sibling. The front of the Beat is largely taken by the huge split Chevrolet grill. The face of the Beat is further highlighted by the space age style headlamps that are perhaps the longest in size in the segment. The bonnet rises upwards towards the wind shield. The Beat’s front bumper houses large round fog lamps that have a chrome garnish. This combination of the Chevy grill with the large round fog-lamps combined with the XXL sized head lamps gives a Spacecraft like look to the face of the Beat.

The sides of the Beat gets a flat wheel fender along with body colored wing mirrors and the window sill that rises upwards as it goes towards the tail lamp. The Beat has a unique rear door handle that is placed vertically on the area where usually you have a quarter glasses. The rear of the Beat continues with the Space Age design theme, large twincept tail lamps with high rear bumper that has stop reflectors placed on them. The rear windshield has the De-fogger and rear wash-wipe feature that is real handy from our experience while driving the Beat Diesel on wet rainy roads of Goa. You also get a large body mounted rear spoiler that gives a sharp edge to the roof line at the back. The LT version of the Beat Diesel that we drove also has factory fitted silver colored roof trails that look sporty. The Beat Diesel drives on upsized tyres as compared to its Petrol brother, the tyre specs for are 165/65/R14 to make the Diesel Beat drive better. More on the drive part later. Another note worth change on the Beat Diesel is the increase of the ground clearance from 165mm on the Petrol Beat to 175mm on the Diesel version. The overall weight of the Beat Diesel is 1027kgs while the Petrol version weighs about 965kgs.

Everything remains the same on the inside of the Beat Diesel too, the Beat always had a nice cozy kind of cabin feel. The three spoke steering has is height adjustable and feels good to grip. The unique sports bike like digital instrument cluster with a soft blue back light looks sporty in the Beats cabin. This sporty speedo unit is column mounted and has a round speedo cluster on the left with a unique digital panel which displays the RPM, fuel level; clock and other tell tales on the right. The dashboard is on black with a grainy texture to it. Everything in here has a space age design to it, the center console on the Beat Diesel LT has a climate control and a MP3/FM player that also has an upfront USB and AUX port on the player. The soft blue backlit theme continues on the centre dash on the climate control and the music system display. The AC vents on the sides are closeable while the center ones are not. The bottle holders in the door pads hold one liter bottles easily while there are many cubby storage holes spread all around in the cabin. The Beat has a flat shaped gear changer that feels nice to grip, we would have liked a touch of chrome or aluminum on the shifter. Twin Can holders are just in front of the gear shifter. The front seats on the Beat offer good support and there is good leg room and headroom in the front. At the rear you get comfortable seats for two passengers ideally while a third one can fit in if needed, two head rests are standard on the LT version. The rear seats are comfortable and the seats are inclined for comfortable long drives. There is good leg and knee room at the rear for two passengers. The Beat Diesel has a boot space of 180 liters that can swallow two suitcases and a few hand bags easily.

The heart of the Beat Diesel is what matters the most. GM India has spent a fortune in designing and developing the all new 1.0 XSDE SMARTECH Diesel engine for the Beat that was developed specially for India by GM Technical Center Bangalore and GM Power-train Europe.

More on the all new 1.0 XSDE SMARTECH Diesel engine

The Chevrolet Beat Diesel is powered by an all new 936cc XSDE SMARTECH 3 cylinder Diesel engine; this engine makes 62.5 PS of power and has 160.3Nm of torque under its belt. GM engineers have used some latest technology on this engine. The engine is based on the popular Multi Jet (MJI) Diesel engine that was co-developed by GM and Fiat. The XSDE engine uses DOHC with 12 valves with a lot of light weight engine components being used to keep the overall weight low. A fixed geometry Turbocharger powers this engine. The engine uses an electrically controlled throttle body that also lessens in keeping vibrations and engine shakes. The intake manifold is made of light weight plastic material that’s been designed for low end torque. The XSDE engine is fed by a CRDI injection that works at 1600 bars. The cylinder block used on the XSDE engine is epoxy coated making its corrosion free.

Fire the engine and it’s impossible to say that under the hood is a 3 cylinder diesel engine. This is one of the smoothest and most vibration free 3 cylinder diesel engines that any car model has currently. The use of light weight material and advanced engineering gone into this engine shows in a big way. The NVH levels are pretty low in the cabin and once the doors are shut it’s rather difficult to make out that this is a diesel car. The Beat Diesel gets a revised gearbox; the gear shifts are smooth and precise. The gear ratios are ideal for in city driving and tuned more for efficiency. Shift to the first gear and the Beat Diesel drives in a nice and sedate manner. The gear ratios are short ideally tuned for higher efficiency and intercity drives. The Fixed Geometry Turbo kicks in at the 1600 RPM and after this the speed builds on rather quickly. An intelligent Launch Support System on the engine detects if the car is climbing on gradients and delivers the torque accordingly. The mid end power delivery is good on the Beat Diesel while the low end torque is adequate for busy city roads. We managed to touch 145kmph on the Beat Diesel which should give you a picture of the capabilities of this engine. You can hardly hear the engine running while driving around the city and the cabin is super silent. On the highways the speed builds up evenly and once you cross the 60kmph speed the engine note is slightly heard. The Beat Diesel handles rather well partly because of the upsized tyres and also due to the new stiffened rebound tuned gas suspension that it now gets. The Beat Diesel drives over bad roads and pot holes in a more relaxed fashion absorbing the bumps. The increased ground clearance also helps things here. The new Electrical powered steering (EPS) works well and helps in keeping the Beat Diesel under control in any situation. The Beat Diesel drives and feels very nice at low and high speeds. Fuel efficiency on the Beat Diesel is good and GM India claims a fuel efficiency of 24kmpl on the Beat Diesel and we will surely examine that in our long term test.

GM India is also recommending a 15,000 KMS or 1.5 years Engine oil change interval to keep running costs low and also would be offering the Beat Diesel with an segment first 3years or 1,00,000 KMS warranty on the car and the engine.

The Chevrolet Beat Diesel is a very good package overall in the small Diesel car segment. It’s got a very light weight, peppy yet efficient (24kmpl) Diesel engine that’s developed using the latest technology. The 3 cylinder Diesel engine is a gem with low NVH levels and near to zero vibration. The Beat Diesel is a fun to drive car in the city and it also does rather well on the highways at high speeds. The Chevrolet Beat has always been a smart looking space age small car and now with the new Diesel option it becomes a very desirable choice in the hot small car segment and also turns out to be a big threat to the likes of Ford Figo and Maruti Ritz Diesels.