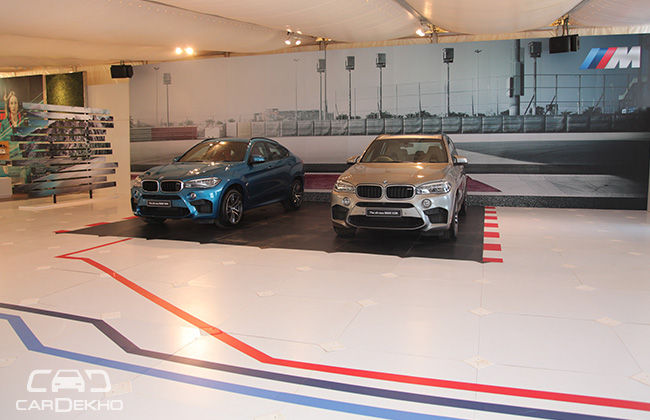 Cars have a purpose, don’t they? There’s the hatchback if you want to trot about in the city, there’s an MPV if you need to take your extended family on a roadtrip and then are SUVs that are capable of traversing any terrain. There are performance cars too, something that’d make you want to grab the keys and hit the tarmac. However, when you talk about performance SUVs - amongst the first things you do, is ponder over the point of it all.

SUVs are inherently heavy thanks to their size, don’t handle too well thanks to the height and are usually preferred to munch cross-country miles or for a spot of off-roading if it may. However, BMW say there are a couple of SUVs...err...an SAV (Sport Activity Vehicle) and an SAC (Sport Activity Coupe) that can take you to office in opulence and be a track tool for the weekend. They say the cars in question have gone round the Nurburgring in a shade over 8 minutes.

Queue the X5M and the X6M. These mammoth sized siblings are an amalgamation of BMW’s XDrive all wheel drive technology and the madness from the boffins at M Performance. We got to get behind the wheels a day prior to the launch, at the Madras Motor Sports Club Race Track. Read on to find out how they fared...

First things first, there’s no taking away from the fact that the X5 and the X6 are pretty heavy cars to begin with. Inspite of engineers from the M division putting both the bulky brothers on a diet, they continue to tip the scales at over 2 tons. When something weighs as much, it will take a lot of firepower to make it go fast. And if it isn’t fast and doesn’t put a silly smug smile on your face, it isn’t an M car. Period.

Well, I’m pleased to report that both the X5M and the X6M do make you go weak in the knees when you mash the pedal into the carpet. For one, you can’t fathom why a 2 ton mammoth is hurling itself towards the horizon a bit too quickly and second you realize that it is at complete ease while doing so. Go power is courtesy a 4.4 litre, twin turbo V8 engine that can clock a 0-100 in just 4.2 seconds. That is seriously quick and in sports car territory. The 4.2 second figure is even more impressive considering the BMW i8 hits the ton in 4.4.

Now, when you slap on a couple of turbos on a high-revving V8, turbo lag would really - and I mean, really spoil the party, wouldn’t it? Well, the party ain’t stopping on this one. The way the revv counter strays into the redline quickly - testing your reflexes at jabbing the ‘+’ paddle shifter. The 8-speed Steptronic is slightly lethargic when you leave it in ‘D’ and tends to shift up slightly early. It would be plain stupid to leave the car in Drive when on the race track, so I dutifully took charge - shifting using the pedals. When you do take control of the gears yourself, you can have a fair bit of fun with both. There’s oodles of torque across the revv band and you wouldn’t be ever left wanting for more go.

And then there’s the tech to set the car up; you get to select between Comfort, Sport and Sport+ each for the suspension, steering response and the throttle response. The track saw us dance between Sport and Sport+, letting us explore what the Ms had in store. The cars really do change characters at the flick of a switch. That said, we’d really like a longer go at the cars to see how it is on public roads, in Comfort mode. The X5M is slightly heavier than the X6M. However, both cars are nearly identical to drive. The high centre of gravity, weight and the all-wheel drive put together are almost the perfect recipe for understeer. You’d be surprised at how well the X5M and X6M manages to control the roll and understeer. A bit of roll does filter in, you can’t defy the law of physics after all. Inspite of the weight and the bulky build - they M twins dive into corners really nicely.

Talking about the track - the Madras track is full of tight bends and we could barely get above 3rd gear, except on the start-finish straight. On a track like this, all you need is a responsive steering and oodles of torque from very early in the rev range. The X5M and the X6M ticks both these boxes. But, you do get rather vary of pushing the car to its limits very quickly. There’s no sense of drama whatsoever - atleast with the traction control on, that is. Yes it has 575 horses under the hood, yes it takes as little as 4.2 seconds to the ton. But it isn’t something I’d take to a track. The M - powered saloons and coupes remain my pick.

What's the USP then? Well, it has to be the Jekyll and Hyde nature of both the cars. They are amongst the rare breed that can put a smile on your face whilst on a track and keep that smile on when you drive it back home. At the end of the day, they are top-spec BMWs. They look nearly identical to their non - M siblings save for aggressive bumpers, flared wheel arches and massive wheels. Not to mention a generous splattering of M - badges around the car. The interiors are doused in leather, get carbon or wooden inlays and plethora of technology to play around with.