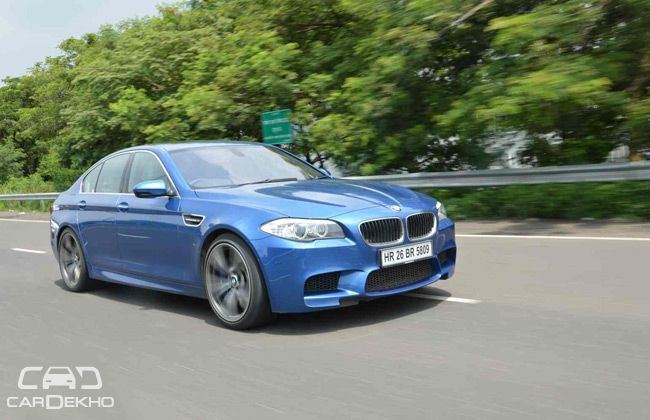 The new generation has a smaller V8 engine compared to the previous generations that were powered by V10.  So, to see how good the current generation is, we take it for a drive and share our driving impressions and find out if you should buy the M5.

M5 is based on the 5 Series platform and there is no hiding in the design. The new M5 resembles the 5 Series— the F10— in exterior styling and hence its model is named as the F10M. It is the souped-up version of the existing 5 Series. The bonnet on the 5 is more like flat, but that on the M5 is more muscular. The strakes on the hood are prominent and the front bumper gets extension. There are two large air vents in the front bumper to suck in a lot more of oxygen for better combustion.

The silhouette is very much like the 5 Series, with the addition of side skirts and ofcourse 235/65ZR20 meaty tyres, and the side metal air scoop. On the rear bumper, there is diffuser-derived design for better aerodynamics and also an integrated spoiler on the boot. The quad-pipe and the M5 indicate that the beast that resides under the hood and also differentiate it from the 5. Even though the design is similar to the 5 Series, BMW states that about 80% of the components are entirely new or have undergone a major alteration for more strength and torsional rigidity.

Interiors resemble the 5 Series, except for a few changes here and there. The M5 retains most of the 5 Series components on the inside. The 330km/hr instrument cluster, the M gear knob and the wraparound bucket seats are unique to the M5.

It also gets different head-up displays, one that shows only the speed while the other reads the engaged gear along with the speed. Apart from this, the rest of the kit remains identical.

It is a bit of disappointment for a M5 buyer, to not get much of a different interior but the quality and the feel is top notch. The large 500+ litres boot space can gobble a weekend luggage for four people.

BMW has plonked in a 4.4-litre bi-turbo V8 engine on the M5 and ditched the V10 engine, as a part of downsizing. Despite the lesser displacement, the power output has been increased by about 10 percent as this V8 mill churns out 560bhp of power and produces a thrust of 680Nm at as low as 1500rpm.

The increased power and lighter engine improves the power to weight ratio, hence there is no dispute of smaller engine. Also, the thrust at low rpm is brilliant making. The engine burbles to life on cranking. The exhaust note is sporty and proudly announces that it isn’t the 5 Series. The grunt and howl notes from the exhaust are sweet.  Overtaking is just away from your right foot.

The seven-speed dual clutch transmission comes mated to this V8 bi-turbo mill. The shifts are quick and smooth and its even quicker when shifted in sport mode. In sport mode, the throttle is also more responsive. And you wake up the wild monster, if you shift to the Sport Plus mode.

The M division has now further enhanced the ride and handling characteristics of the previous M5. The ride suppleness of the M5 is excellent and at times feels better than the existing 5 Series. It is quite astonishing that how good the ride of the M5 is.

The M division has ensured good ride, as buyers can use it for touring as well. The light steering wheel reduces the stress of the driver, especially when driving in bumper-to-bumper city traffic.

Despite the increase in ride suppleness, the M5’s handling attributes haven’t been compromised. The handling has been further augmented thanks to the alacrity and flexibility of the F10M chassis and underpinnings. The BMW M division has safeguarded the handling bit, as it is one of the base roots for the M cars . Track is where the car will really impress you. Push it till your limit and it won’t run out of juice, there will still be more to offer.

The options for a four-door performance edition saloon are fairly limited in India. The new M5 ticks that the correct boxes and definitely has the handling prowess that looks for. So, if you wish to procure one from this segment, the M5 is one the favourites that could be bought.