When the 5 Series got a refresh in 2013, BMW consciously dropped petrol motors from its line-up, opting to retail just the diesel variants. Now, three years on, the petrol motor is back. Enthusiasts, go back to your seats, for it isn't the 535i you wanted. It's the tame, 'entry-level' variant, the 520i. Call it a sign of changing times, rising demand, or uncertainty over big diesels in general, the 520i is here to stay. 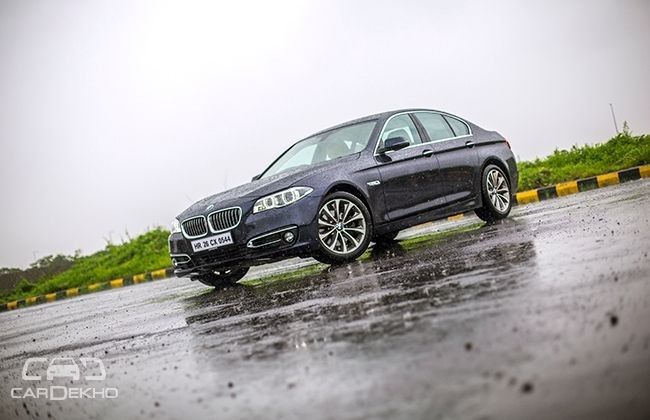 Even though the sedan has been around for around half a decade, the design shows no sign of ageing. It is clean and understated, much like its predecessors. The face follows the BMW recipe and gets the kidney grille plus corona ring daytime running lamps set-up, which makes for an intimidating sight in the rear-view mirrors. The sides and the rear are clean and fuss-free, featuring a nice blend of straight and curved surfaces.

The 18-inch alloy wheels, the LED tail lamps and the sloping roofline, all do their bit in adding some flair to the design. All said and done, it still isn't something that would make someone look twice. It is simple, unassuming, and prefers to blend in the crowd, much like the intended owner. That said, we wish the petrol variant was offered with an M Sport kit as well, just to add some zing to the aesthetics.

The interiors aren't vastly different from what we saw on the 5 Series when it first broke cover. Over the years, the formula has remained unchanged. It is bathed in high-quality materials, including leather, wood and brushed aluminium, and has ample creature comforts to keep you entertained. The feature list includes dual-zone climate control, electric seats for both the driver and co-driver, and a sunroof as well. The dashboard is in line with the rest of the BMW clan, with a large wood accent running from the steering wheel to the passenger-side window. The design, again, is subdued and has no over-the-top elements.

Is it comfortable? Oh, you bet it is. Both the front and the rear seats score really high on cushioning and support. Legroom isn't in the league of the Mercedes E-Class, but there's still enough room for your knees. Shoulder room and headroom are barely a cause for trouble either. However, the cabin can seat four in comfort, and five in a pinch. Don't get us wrong: the cabin is wide enough to accommodate three occupants at the rear, but the high transmission tunnel takes up a lot of room.

What's it like to drive? Before we get on to that, let me point out that the engine is amongst the most silent ones I have ever tested. We wouldn't blame you if you had to second guess whether the engine was on. Is it quick? Well, on paper, the 184PS of power, 270Nm of torque and the 7.9-second dash to hundred seem really promising. But it isn't blistering quick as you'd expect it to be. There's no drama, no fuss -- just clean, linear power delivery. You will notice the pull getting stronger as you pull past 3000rpm, before it finally peaks at its 6500rpm redline. All of the 270Nm is available practically throughout the rev range, which comes in handy for a quick overtake or to dart into a gap in traffic.

Thankfully, the gearbox is quick enough to complement the motor. The eight-speed ZF automatic does a fine job of picking gears and you are almost never stuck in the wrong one. There's no Sport+ mode on offer here, but Sport does well to keep the motor on the boil and make you smile. Keep wringing the engine and you will be treated to a nice, throaty note from the engine, which will make you want a better exhaust. That said, a loud drony exhaust inside the confines of a city would've been a bit too much, no?

Speaking of which, the 520i is at ease in the urban jungle. Despite the long length and the slightly wide turning circle, you can pick one as your daily driver. The suspension is set up soft, which makes city commutes easy on the back. Ground clearance is aplenty and broken tarmac is handled without a hue and cry. Out on the highways, the 5 Series rides flat and there's next to no vertical bounce that would unsettle occupants.

The steering too has a nice weight and feel to it, which inspires confidence at high speeds. The 520i isn't meant to be a corner-devouring saloon, but it feels relaxed switching directions quickly. Credit goes to the precise steering which always lets you know what the tyres are up to. Of course, there are a lot of electronic nannies to keep you safe too, in case things get scary.

The 520i is a no-nonsense luxury sedan that gets you from point A to B in relative comfort and is reasonably fun to drive too. That said, we wish it were priced far more aggressively, to take on the likes of the Audi A6 35 TFSI, the Jaguar XF and the Mercedes-Benz E200. At Rs 54 lakh, it costs exactly as much as its diesel sibling, the 520d, that gets an additional M Sport kit, a more frugal engine, and the same amount of gizmos.