The new generation A4 diesel may not look all that different, but promises a new world of luxury, frugality and thrills. Does it? 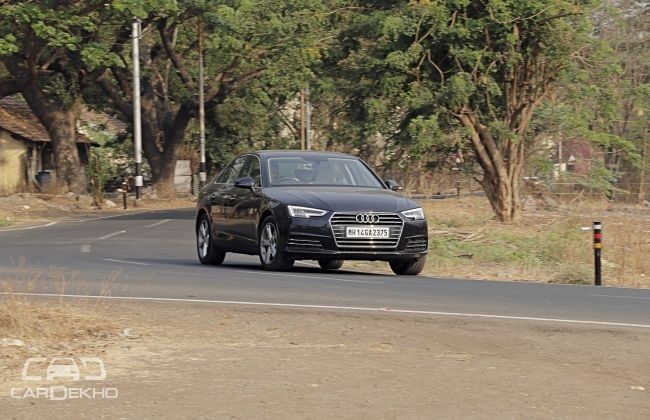 There was once a time when the A4 was the most affordable car you could buy with the four-ringed badge. Its sporty, yet, classy design found takers in the thousands, many of whom have had to wait for way too long for the new generation to arrive.

While Audi introduced the petrol earlier, it’s now been launched with the highly-anticipated and punchier diesel engine. Is the experience all-new?

We’re dead serious when we say this – the car in the image above is an entirely new model. Like we’ve seen with most Audis, generational changes don’t result in biblical design alterations. However, the new car looks statelier, more mature and there’s an air of class about it.

The well-defined shoulder line makes the side profile look longer than before, adding to the sense of size. In fact, you’d be forgiven for thinking this is the A6, because it does look bigger thanks to the increased length and wheelbase. While the height remains the same as before, the old car was wider and up to 95kg heavier too.

The new A4’s hexagonal front grille is bigger and with a generous application of chrome, flashier too, but not gaudy. Full-LED headlights illuminate the roads at night, while the clusters themselves are sharper and look more futuristic. The tail lights stretch further into the rear fenders, making the car seem wider than it is. The rear lamps also get dynamic LED turn indicators, which sweep outward in the direction of the turn. With clever changes like this, the new Audi A4, despite its familiarities, is a head turner.

Faults? Well, the design you get for the 17-inch wheels is rather bland. Also, it’d probably look sportier with single muffler-tips on either side, like in the brochure.

With the interior, Audi has cleaned up its act quite literally. Apart from the use of richer quality materials, there’s reduced clutter to make it more visually appealing. The beige-black dual tone palette will be a popular choice and adds to the luxurious flavour, but the light upholstery does stain quite easily. An all-black layout would be our choice. Overall, it feels old school, especially because of the wood-finish panel that runs across the dash and onto the doors. And that’s where it’s joyfully misleading.

The interior may seem classical, but the tech is EDM. Beginning with the touch-sensitive three-zone climate control console, which has been smartly integrated. Long story short, unless you want to change the air-conditioning settings you don’t need to push the switches. You can view the functions a button can shuffle through by simply touching it and the relevant information is displayed on the panel above. No surprise that the AC works fast and efficiently, but what is surprising is the exclusion of ventilated seats, which Audi does offer as an option overseas.

What’s nice is that even with additional gizmos, Audi has not only retained the old car’s easy ergonomics, but improved on them. The rotary dial to operate the multi-media interface (MMI) feels like an iPod to use and there’s no lag between it and the seven-inch display. It also comes with MMI touch, wherein you can enter inputs for navigation and telephony through handwriting recognition.

The gear selector itself is shaped to act as a palm rest while you use this dial. Additionally, there are rocker switches to quickly access the most commonly used features like navigation, media and radio. MMI does get Android Auto and Apple CarPlay, but the screen isn’t touch-sensitive, which does take away from the functionality of these apps a little.

Notably, the sound system, while appreciable, feels lacking for a car that will cost close to Rs 50 lakh on road. It sounds a tad flat at higher volumes, the rear seat occupants can feel the sub-woofer’s vibrations and it doesn’t feel powerful enough when turned up all the way. The Skoda Superb’s Canton audio system, for example, envelops you in the music in a way that the stock Audi sound system just doesn’t.

Of course, what’s a fancy car without some gimmicks? Enter, the Audi Virtual Cockpit. This instrument cluster consists of one LCD display that can be customized to view a range of information, including drive data and media information. The biggest draw here is the navigation display, which makes it easy to follow the route guidance without taking your eyes off the road.

Apart from the usual must haves like a sunroof, electric seats with memory, steering mounted controls and a push button starter, you also get an inductive phone charger under the driver armrest and touch-sensitive cabin lights.

Importantly, it’s easily one of the better cars in the segment for the chauffeur-driven lot. Two people who are up to 6ft tall can sit one behind the other and there’s adequate knee, leg and headroom too. For perspective, it beats the 3 Series and Jaguar XE in cabin space, while trading a few punches against the C-Class. The seat cushioning is spot on and is just firm enough for long distance comfort. There’s adequate lateral support even in the rear bench and sharp turns will see the back seat occupant held well in place.

However, even though the A4 hasn’t been launched with Quattro in India, there is a big floor hump which makes it a four seater at best. We also wish the rear backrest was a bit more reclined, which, heftier people in particular, will find a tad upright. What’s also missing is a set of infotainment controls for the rear occupants, which should have ideally been integrated into the central armrest in place of the shallow storage space you currently get.

Despite these shortcomings, it’s still one of the most practical cars in the segment. You even get a big boot with nice touches like a luggage net and baggage hooks, and importantly, the spare tyre sits UNDER the boot floor, not on it.

With the A4’s petrol motor now focused on efficiency, the new car’s 2.0-litre, four-cylinder TDI mill has to please the enthusiast and the “Kitna deti hai?” audience simultaneously.

The motor now makes 190PS of power and 400Nm of torque. That’s more power and torque than before and the numbers mirror the BMW 320d’s figures. The engine noise is noticeable at startup but settles into a refined hum once you get going, with no intrusive vibrations. Off the line, the A4 offers likeable performance. In the city, a light dab of the throttle is enough to make smooth progress and even low-speed overtakes. The torque delivery is simply effortless and there’s usable performance for daily drives.

However, get even a little generous on the happy pedal and the car changes personality and rockets ahead. Especially on the highway, you will be breaking most speed limits quickly if you don’t keep a watchful eye on the speedometer. Because of the motor’s smooth nature, you never feel like you’re going too fast, but our road test saw the 0-100kmph sprint executed in 7.96 seconds.

It’s marginally slower than the 320d, but it certainly doesn’t feel like it. The difference is in the statistics, not the experience. We’d attribute the slower sprint time to the front-wheel drive layout, which results in torque-steer (3 Series is rear-wheel drive), making it that little bit more difficult to get the perfect launch.

The A4 diesel will never leave you wanting for more power, but it prefers cruising over ferocious performance bursts. Settle into a highway drive and the A4 can manage triple digit speeds all day long without breaking a sweat and staying quite silent too. Hit highway traffic and there’s enough muscle at the top-end to make high-speed overtakes a breeze too; even with a full passenger load. In any given scenario, there’s no need to rev the engine beyond 2,500rpm, thanks to the healthy mid-range punch.

Of course, how can we not mention the seven-speed twin-clutch automatic gearbox that offers lightning quick and incredibly smooth gear changes? Combined with the widespread torque, the kickdown response is immediate and the A4 goes from 20-80kmph in just 6.69 seconds.

Unlike its predecessor, it also gets paddle-shifters, which feel a bit tacky, but are very responsive. Truth be told, though, the gearbox is so intuitive, you won’t want for paddle-shifters unless you’re looking at some really impatient driving.

For the economy conscious

As quick as the A4 diesel is, it’s perfectly predictable to drive in daily traffic. There’s barely any throttle input needed to potter about at city speeds and with a tested fuel efficiency of 12.53kmpl in traffic, it’s easy on the pocket too. Thanks to the great cabin space, big boot and cruise-friendly engine, the A4 will be a great road trip partner too and we managed to extract 16.81kmpl on the highway. Combine that with a tank capacity of 54-litres and you can manage a travel range of over 800kms, even while doing early triple digit speeds consistently.

At low speeds the A4 is very comfortable. It deals with bad roads quite well and doesn’t crash or get noisy through potholes. Even at high speeds, it remains stable and body-roll is well in check even during sharp lane changes. Stopping power is strong too and a hard braking test saw the car go from 80kmph to a dead stop in 26.88 metres. That’s almost the same as the Ignis diesel, a car that weighs around half a ton less!

The steering, however, is still standard Audi fare. It’s responsive and weighs up well with speed, but lacks feedback. There’s a fair amount of guesswork and corrective steer needed while attacking corners/long curves and a more communicative steering would’ve worked wonders in making the A4 appealing as a driver’s car.

Drive Select, which alters the steering and gearbox response (suspension remains unaffected), doesn’t change the behavior dramatically either. So even in Dynamic mode, you don’t get that desirable connect to the front tyres. That said, the steering’s great to grip, is light enough to make filtering through traffic a breeze and gets the job done while cruising too.

Looks can be deceiving and the new A4 is the ultimate example of this. Whether it’s a matter of quality, features or performance, the new Audi A4 diesel betters its predecessor on all counts, while offering an experience that’s truly different. The new powertrain is engaging to drive and efficient in the real world, while the interior packaging makes this one of the best options in the segment for chauffeur-driven owners.

At Rs 41 lakh-Rs 44.16 lakh (ex-showroom Delhi), it’s competitively priced too. Not only is it a great all-rounder, it’s also fresh enough for existing A4 owners to make the upgrade.

Prefer petrol and wondering if the A4 petrol is for you? Take a look at our video review: