Audi India recently had a special drive for a handful of journos on a special test track that was created for testing its entire A series of cars. It seemed that the drive was aptly called as the `A` Drive. Let’s start with the first things first, so the question is what Quattro is? The answer is Quattro, as Audi calls it, is a 4 Wheel Drive in simple layman’s English. It was first introduced by Audi in the year 1980 for its cars.

After a few years in 1987, Audi replaced a manually-locking centre differential with the Torsen (torque sensing) Type 1 (T1) centre differential. This allowed engine torque to be automatically directed to individual axles as driving conditions, and grip warranted. Under 'normal' conditions (where grip in both front and rear axles is equal), torque is split between front and rear with a 'default 50:50 distribution in many, though not all, versions. In adverse conditions (i.e., when there is variation in grip between front and rear), a maximum of 67-80% (depending on the transmission, or model of Torsen diff) of the engine's torque can be directed to the front or rear axles.

The fully automated mechanical nature of the Torsen centre differential helps prevent wheel slippage from occurring, by diverting torque instantly, without any discernible notice to the vehicle occupants, to the axle which has more grip. This method of operation can be described as proactive. Furthermore, unlike the various types of electronically operated differentials, Torsen has no requirement for electronic data, from sources such as road wheel speed sensors; it therefore has an element of fail-safe, unlike designs such as Haldex Traction, should one of the wheel speed sensors develop a fault. In comparison, viscous coupling, and electronically controlled centre differentials that are used in other four-wheel drive systems are reactive, since they only redirect torque after wheel slippage has occurred. 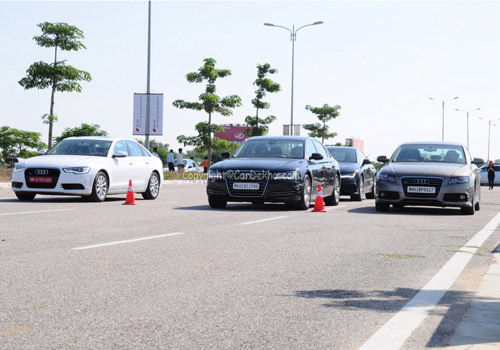 The advantage is felt under hard acceleration, including whilst cornering, since the torque transfer between axles is seamless, thus maintaining stable vehicle dynamics and considerably reducing the chance of losing control of the vehicle. Now currently in the 6th generation of the Quattro is present in the latest Audi cars. Audi has taken the Quattro to a all time technological high and we were given a firsthand experience driving the A4, A6, Sportback A7 and the A8L under the guidance of Mark Allison (former racing driver) who had specially flown in from the renowned Audi Drive Experience at Cape Town South Africa. For all those who have seen the famous Hollywood movie Transporter, Mark is the real life Transporter. 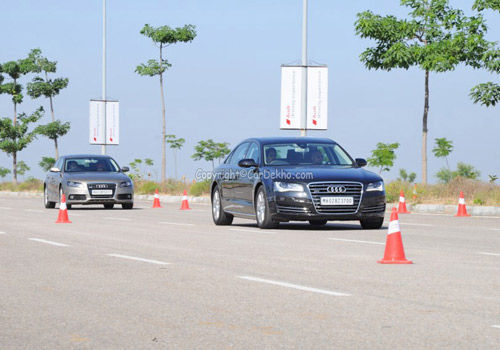 We drove the Audis from the hotel at Jaipur to the test track at Mahindra World City and were firstly briefed by the Mark about various safety aspects and rules for the obstacles for the day. Mark also showed us basic stuff like the best/safest drivers seating position, the format of gripping the steering to get the best control in tricky situations to the ideal driver seat height adjust. Audi makes one of the safest cars in today’s world and the cars we were test-driving were Audis from the Rs 35 lakh to Rs 1 crore price ranges but the common thing in all of them were the top class safety and reliability levels which were of the highest levels. Safety features like Airbags, ABS, ESP(Electronic Stability Program), crumple zones, impact bars to name a few are very vital things on today’s cars and can go in a long way in saving ones lives in an event of a car crash. 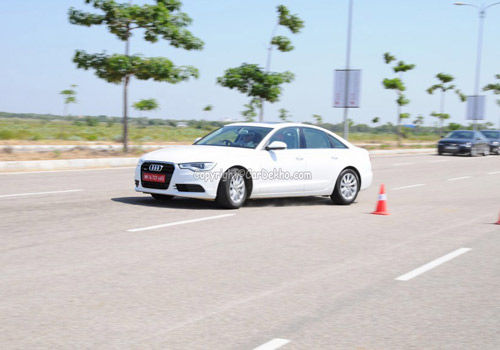 We were asked to follow Mark who was leading the convoy of cars on the test track for a dry run, he also demonstrated the latest ESP systems and showed us he was in touch with all the cars via the wireless and gave us minute by minute pointers on what to do and what not to do on the track. After the dry run we were on our own but still Mark was in touch to keep a check on us. Of all the A series of cars I started off in the smallest and the least expensive the A4, the first obstacle was to drive in a zigzag fashion  in between the pointers avoiding them at a brisk pace, this is where you realize how tout and neatly the Audis really handle. Later I tried the same in the new A6 and the A7 Sportback and finally the A8L which is the biggest in size of the lot. Surprisingly the A8L handled as easy and sweetly as the A4, now that’s real Audi engineering and dynamics for you. The Quattro in all the A series Audis worked flawlessly and intelligently during the obstacles that the beauties were put through. 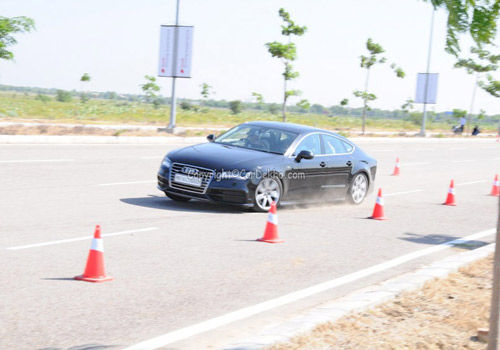 However that was not all, the toughest obstacle was still in store for us. We had to drive at speeds of 70kmph on a straight stretch and then dodge an obstacle and spin to the right and at the end hit the brakes to the limit. Plastic cones were used as obstacles and that kind of things made it a bit easier and reassuring. We all tried it starting in the A4 then in the A6 and A7 Sportback and finally in the A8L. The Audi engineering and safety levels clearly stood up and I bettered my run after each attempt. 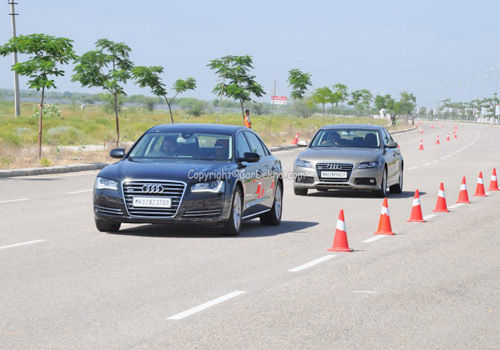 My confidence level grew thanks to the safety levels of these cars and my fear was all gone, Mark made us do the same routine but now at speeds of more than 70kmph and the Audis just exactly did what they were asked to do. Well to tell you the truth Mark did the same routine at speeds of 135kmph with ease and with a smile on his face. 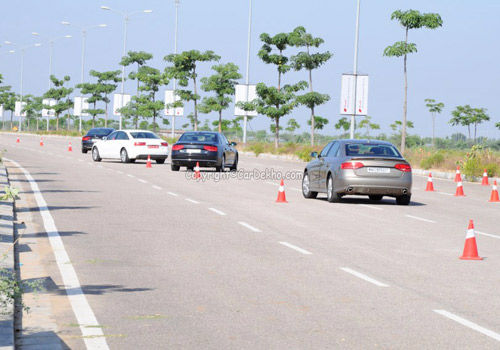 The Fish Tail obstacle was also a tough one, here you had to drive the Audis at high speeds until you come to a hair pin bend and I got a chance to do it on the new A6, the car simply went through the motions with ease and there was no foul steer, the A6 felt wonderful while cornering the sharp bend.

We also had the panic braking routine which proved the levels of accurate and high quality braking system on the Audis. By the end of the day one thing was sure, we knew that Audi makes one of the safest and very good handling passenger cars that money can buy.On the whole our Audi Drive Experience gave us an understanding of the true safety levels of these cars, all thanks to the wonderful Audi cars and their instructor, Mark Allison.