The year 2011 has been a big year for the automobile sector in India. With the global biggies coming into the market, even the Indian car manufacturers have done their bit to keep up with the market requirements. TATA MOTORS has been on its toes this year with its launches. Just a month back they launched the TATA ARIA 4X2 and now here they come with yet another appealing offering to us with the all new TATA INDICA VISTA: SEDAN CLASS! 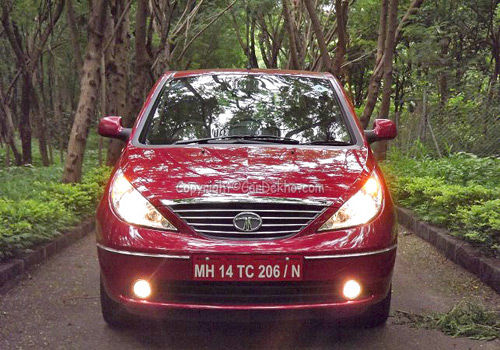 There is barely anything Indica like left in the new Vista apart from the bodywork. When you get a look at the car from the front end, you might actually get confused between the INDICA VISTA and INDIGO MANZA now. They resemble to each other in every aspect from the front looks of the car. Unlike the previous model, this new Indica Vista gets a new front end with polished chrome grill. The car gets three-barrel headlamps which we have already seen in the Tata Manza. At the rear end the car has a new pearl black finish strip on which the TATA logo is rested upon. Even this TATA LOGO is much chunkier than on the previous models. If you notice on the front grill, the logo is big with a perforated background which makes it very aesthetic looking.

The new Indica vista has always been a very spacious car in its segment and it still continues to be one with the new model as well. The interiors are very roomy and comfortable for the passengers and can occupy 5 persons with ease. The interior colour scheme is DUAL TONE- ebony black and Sahara beige. The entire range of new Vista’s get fabric lined seats where on the lower two models it is partial fabric and on the higher two its full fabric. All models also get adjustable head rests for the front seats. The head rests for the rear seats are present only in the new Tata Indica Vista VX/GVX and new Tata Indica Vista ZX/GZX variants. The higher variants also get a storage tray under the co-driver seat. Apart from the new Tata Indica Vista LS/GLS all models get an illuminating ring around the key hole. All models also get visiting card holder, pen holder and coin box in glove box. The higher variants also get the light intensity adjustment for instrument cluster. The instrument cluster is placed in the centre in all the variants. Front cabin lights are also standard throughout the range. The new Vista also provides with driver and co-driver side sunvisor with vanity mirror on the co-driver side. There are storage pockets available on the front and rear doors. The higher models also get an antiglare internal rear view mirror.

The lower two models get a regular HVAC while the higher end models get electric HVAC controls. Hydraulic power steering is standard on all models where as the tilt adjustment for the steering wheel is only restricted to the higher variants. The new Tata Indica Vista LS/GLS model does not get power windows while the new Tata Indica Vista LX/GLX gets front power windows. The new Tata Indica Vista VX/GVX get both front and rear power windows as well as high adjustable driver seat. The lumbar support on the new Tata Indica Vista VX/GVX and new Tata Indica Vista ZX/GZX is two-way adjustable for the driver seat while that on the lower variants and the co-driver seats is fixed. The top two models also get front and rear power outlets and also the rear screen demister. All models get remote release levers for the fuel lid, tailgate and front bonnet. Tachometer is absent in the lower two models. All the new vista cars get a digital clock. Apart from the new Tata Indica Vista LS/GLS the new VISTA gets a 2 DIN music system with FM/MP3/CD playback. All these models also get a USB port as well as an auxiliary input. There is an infrared remote provided for the audio system. There is also a Bluetooth connectivity offered by the system which can be paired with up to 5 phones. It is called as the BLUE5 by the company. You can also access your phonebook with the help of the Bluetooth in your vehicle system. Audio controls are placed on the steering wheel for better comfort with the provided music system with 4 speakers and 2 tweeters.

DIESEL: The Quadrajet is available in all four engine options while the TDI is available only in the LS and LX

All models run on tubeless radials. The car is brilliant to drive and has very sharp cornering abilities. For all those who thought an INDICA is just a car to commute, this model will let you push it through the limits and the car will ensure that you have a awesome driving experience. The suspension is very precise for the vehicle of this size and weight. It doesn’t feel too soft or too hard. The front suspensions are independent lower wishbone, McPherson struts with coil springs and the rear suspension is a semi independent, twist beam with coil spring and shock absorber. The new Vista gets disc brakes on the front and drum brakes at the rear. The brake type is vacuum assisted independent dual circuit, diagonal split hydraulic brakes. The car was driven for about 20-30 kilometres and the drive feel was very impressive. There was no turbo-lag in the diesel and zero sluggishness. The petrol on the other hand also was very peppy and moved past the city traffic with ease. But as we all know that the Quadrajet is a gem on an engine. The car revved up effortlessly on all road conditions. Highway cruising was a bliss since there was very minimum wind noise and almost negligible vibration. The new Tata Indica Vista drove over potholes and bumps very easily. The best thing about the new Tata Indica Vista is that despite of its tall body there was no body roll at all. We drove the car in a circle which was already drawn on the road and the car managed to stay inside the lines without power sliding. The fuel economy as per the ARAI numbers is as follows:

With a fuel tank capacity on 37 litres and such brilliant fuel economy TATA MOTORS look forward to selling this car more effectively than the previous new Tata Indica Vista model.

The 2011 INDICA VISTA is a very good option which is now available in the market. The car has better handling as compared to its rival and as we all know that TATA provides with very cost effective after sales service. The new Tata Indica Vista is also taller and wider as compared to most of its rivals like the Ford Figo or Volkswagen Polo making it a better option to own even at a lower cost than the others. With all the new features and gizmos added the car is a very appealing offering from the TATA stable which will give the other manufacturers a run for their money.