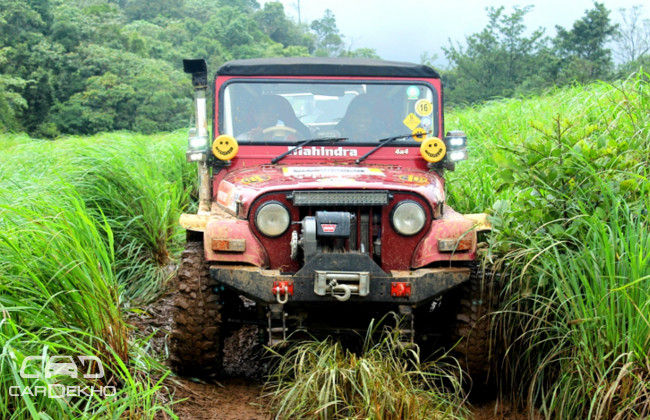 Day 2 of the Mahindra Great Escape wasn’t any different with the rains still coming down hard all the time. The warmth of sun that managed to streak through, though even for a few seconds, was a welcome. But then, the rains just added to the fun. The second day of the Great Escape is the competition round where the participants sweat it out to fight for the top 4 positions. The 4 winners will then compete in the grand finale where the winner gets to drive off with a Mahindra Thar.

The morning started with the registration followed by a small briefing about the track, the obstacles and the different parameters that the competitors will be judged on. The judges will score the competitors based on four parameters - completion of the obstacle, drive through, vehicle preservation and external help taken.

The participating vehicles were classified into various categories as heavily modified, modified and stock. The modifications done to the vehicles ranged from shortened wheelbase, modified suspension, mud-terrain tyres or even new engines.

Mr. Goutham, coming all the way from Pollachi, Tamil Nadu, is participating in the Mahindra Great Escape for the first time. He has been into off-roading for the past two years and came to know about the event through their website. About his car, he says “I have a Mahindra Major fitted with a Scorpio engine and 35-inch tyres. I have installed differential locks. The total cost I have spent on the car would be more than Rs.5 lakhs. This is my first time participating in the Great Escape and look forwarding to it.”

A total of 15 vehicles were ready to battle it out and we started our drive towards the first of the obstacle through the nature’s trail.

Driving is not just about putting the gears and go forward. Sometimes, how good are you driving the car backwards also helps. The first obstacle was based on that, where the participants have to drive their cars backwards through a winding track lined up with bamboo poles. Though finishing in the least time possible is the main objective, contestants have to be careful not to hit the bamboo poles or get stuck in the mud.

As the participants took their turn one by one, the track became much harder to go through, no thanks to the rain. The cars that got stuck were swiftly winched out by the marshal cars. Very few managed to finish the course and lesser did that without hitting the poles or getting stuck.

For the second obstacle, we drove up and down deep into the grasslands. The winds were picking up good speed and this only heightened our expectations of how the contestants will complete the upcoming obstacles.

The second obstacle was a simple drive up and drive down course. It may sound simple but the course was set in a way to observe how the vehicle handles through the sludge and more importantly how the driver handles the vehicle and keeps it under control.

As soon as we saw the third obstacle, we know we are in for some heavy clutch-burning action. Contestants have to drive their cars up a steeply inclined track to the top. As simple as it may sound, there is always a catch. Halfway through the track is a hump, whose sole objective is to take away the pace of the upcoming car and to rattle both the car and the driver.

While some contestants took the all-guns-blazing route, some followed a more calculated approach. Many came down the same way back defeated by the hump while some missed it just by a couple of yards without being able to finish the course.

The fourth obstacle traced the second obstacle in the reverse course and again the contestants were judged by not just their abilities to clear the course but also in controlling their vechicles.

As we finished the obstacles and drove back, I saw everyone smiling and sharing a joke about the slip ups and the conquests that some were able to do. The Great Escape not just allowed them to hone their off-roading skills, but also to understand more about their cars and to let go some steam away from their busy lives.

This edition of Mahindra Great Escape at Sakleshpur was special. Not only the tracks were exciting and difficult, the participants also proved to be very good. The ever-pouring rain and the blood-sucking leeches added more drama while the vehicles with their off-roading abilities made for a thrilling episode at each stretch. Can’t wait to get back into the wild. Till then, here’s to off-roading.