Series 1: How Can You Look So Beautiful at 51 - Ford Mustang 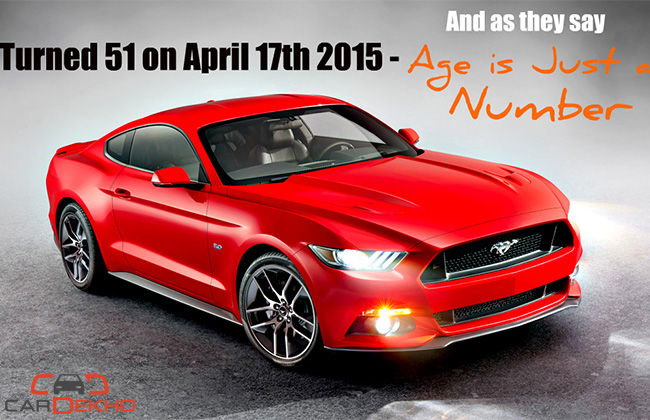 We age and lose the charm, but it’s other way round for cars, they grow and look young as ever! Look at the Mustang, the pony is 51 years old and damn it looks hot as hell since 1964.  Mustang for the first time in its current sixth generation, literally in half a century of its history, got the wheel on the right side and folks at ‘Blue Oval’ are confident that there’s not a single spot left in the world, that doesn't get a Mustang!

The Mustang invented the fastback design - long hood and sloping roofline and it also brought the pony cars tag in America. Pony cars in the States are affordable automobiles build to perform, while looks are inspired from the Mustang! How it came into the world? The first Mustang was introduced to the public on April 17, 1964, at the New York World’s Fair. And I'm sure Ford seriously didn't know then, what it has done - 51 years of continuous production and legions of fans all over the earth considering the fact that it only went global last year after like 50 years! #Respect

Shelby involvement was also legendary, Carroll Shelby was kicked into Ford with the V8s for the Shelby Cobra in the early 60s. And nearly after 5 months of the Mustang's unveiling, Ford in August 1964 has asked Carroll Shelby to develop a high-performance Mustang fastback. In September, first ever Shelby-Mustang was born - a ‘65 GT350 and the rest is all the gloating history for the ‘Cobra’ emblem pony.

Whether it's you, your father, your grandfather they all know about the Mustang and all of them has a heart that beats for this 'pony car'

Americans totally adored it, I have read stories involving the Mustangs, seems like everyone has their own Mustang story in America. People are emotionally moved by this vehicle - why this car, why not any other? At the time of launch, Ford initially thought of rolling out one lakh vehicle in the first year, but the automaker passed this figure in mere four months. For the record, the American automaker sold over 7 lakh Mustangs that year - goosebumps? It was poor man’s sports car at that time, unquestionably it still is and this emotional connection has what kept the Mustang running strong all these years. I wish 100 more years for this blue collar’s sports car.

Countless movies, TV appearance and innumerable fans on this blue planet — the Mustang is a star in its own

In the late 80s and 90s, the Mustangs made by Ford resembled nowhere close to the original pony and as a result, they weren't as popular either. But lesson learned, for the fifth generation Ford re-introduced the Mustang brand in 2002 as Mustang GT concept @ 2003 Detroit Auto Show and it indeed looked the true spiritual successor to the ‘67 Fastback. The concept had all the classic cues and yet it looked modern (check out the picture below).

The fifth-gen production version of the 2002 concept made its debut again at the Detroit show in 2004 and it went on to sale in 2005. This Mustang again pulled its dear fans towards it and paved the way for the sixth-gen car (current one).

Speaking of the sixth gen - the 2015 Mustang, it went on to sale last year and is currently on the world tour for the very first time. A lot of things happened for 2015 Mustang for the very first time - a world tour, rear independent suspension and, right-hand drive. Ford also launched a limited run - 1964 units (to commemorate its launch year 1964) of the Mustang 50 year Limited Edition, last year. It has oodles of retro styling and got everything the sixth-gen Mustang has to offer as optional.

On April 17, 2014, Ford also repeated half a century old stunt on its 50th birthday - putting the Mustang convertible again on top of the observation deck of the New York’s skyscraper icon - the Empire State Building. Just like they did in 1964!

PS: The Camaro wishing the Mustang 50th birthday last year was just epic and the Chevy wished - ‘here’s to another 50 years of rivalry - your friend Camaro’ it's amusing, isn't it?