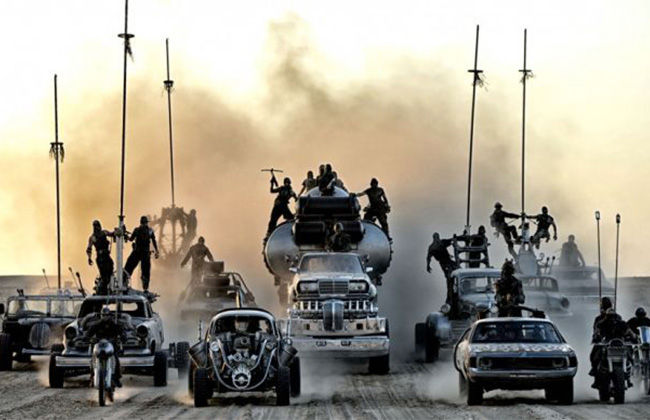 Mad Max Fury Road is a movie about how in the future, oil and water become the two most important resources and their possession results in domination. But, at the end of the movie, audience simply did not bother with the story, rather they were all blown away by the mad cars and trucks used in the movie and were curious to know what exactly those vehicles were. All the vehicles you see in the movie are in fact real cars and which are fully operational and derivable. Here is a guide to the 10 best mad vehicles of Mad Max Fury Road.

Although the new Fury Road does not use the iconic Max Interceptor much, the vehicle remains an icon for the Mad Max series. The Ford Falcon / Interceptor is heavily modified to tackle the rough desert terrains. All the panels inside and out are made of metal and one more supercharger is added to the car and is stacked with a skull on top. Rear suspension and fender are raised to accommodate the large 37" off-road tyres. The back of the car holds the weapons and a tank. The interior is replaced with a rugged and bare sheet metal instrument panel.

The Gigahorse is a stacked pair of 1959 Cadillac Devilles bodies. It is powered by two Chevy 502 engines. The car has a specially designed system to accommodate those 2 engines side by side and connect them to a common transmission. Being the personal ride of Immortan Joe, this car showcases luxury of the Cadillac (what's left of it) with the raw and immense power which the BOSS CAR deserves.

The Nux Car is probably the most eye catching car of the movie, mainly because in the starting of the chase, Max is tied to the front of the car as a blood bank. The car is originally a 1932 Chevy five-door coupe which was heavily modified on the outside along with a super-turbocharged, nitrous-boosted, steel coil, V8 engine. The look of the car is made intense with canted wheels and swooping exhaust pipes.

The War Rig was the center of attention in the entire movie. The chase begins with the War Rig taking a detour to reach the green land. The truck is originally a cross of Czechoslovakian Tatra truck and a Chevy Fleetmaster on a six-wheel-drive 18-wheeler trailer powered by twin V8 engines. It also has a fuel pod trailer at the end. On top of the hull is the cabin of a Volkswagen Beetle and a track cabin shell.

What Warner Brothers call “sonic carmageddon,” the speaker-stacked, guitar-thrashed monstrosity was made to rally the war boys with all their heart and passion like the way drummers in ancient battles marched with soldiers. Powered with a supercharged V8 engine and fully equipped with a mobile stage, a wall of speakers and subwoofers, and the prominent air conditioning ducts, the Doof Warrior sheds out metal music while being tied with a bungee cord mounted at the front. The blind artist thrashes his double-necked electric guitar which throws flames from the end. The wagon has over 60 Marshall speakers connected to the front of the truck and old air-conditioning ducts as the resonator boxes for the drums.

Ride of the only son of the devil, the 1940s-era Fargo workhorse turned monster truck has a harpoon shooter, a belt-driven machine gun and a massive supercharged V8 engine. Despite of all that, the best part of the car is its huge 66-inch, all-terrain tires and the heavy duty axles acquired from a military supertanker. This monster has four feet long suspension and 600 cubic inches of displacement underneath, perfect for a lumbering boychild.

Any high action, high explosive car chase is incomplete without a tank. But again, this is Mad Max, just a tank wont suffice. So, the Bullet Farmer gets a 1970s-era Valiant Chassis fused with a Ripsaw Tank. It is fully equipped with a machine gun, tank treads, and a torpedo slated over a water-cooled Merlin V8 engine. It also has mounted aviation parts, a sharp mouth of bullets, and a huge armory behind.

Fully covered in spikes, the what used to be a 1937 Plymouth sedan used by the Buzzard Tribe is a mean machine. It is made to withstand grenade blasts, punctures and anything which comes its way.

Buzzard tribes drive cars that crush, puncture, and tear, and even tunnel underground. The Buzzard Excavator was originally a M.A.N. 6X6 tractor and has a total of 1,757 steel spikes all over its surface which is the exact same number of quills found on the hide of an Australian anteater. Coincidence? I guess not.