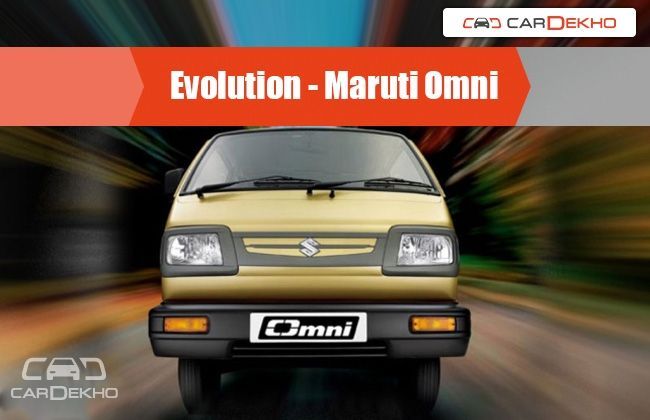 One of the earliest and most versatile car to ever hit the Indian streets was the Maruti Omni. The car with over 15 million satisfied customers, originally started its life as the Suzuki Carry and eventually the seventh generation of this happy little van was rebadged and renamed as the Maruti Omni. Needless to say that this car brought a lot of joy to all the Marutians. Maruti Omni was launched in 1984 and was manufactured and sold by Suzuki’s recently launched  Indian subsidiary Maruti Suzuki. The car is an ideal example of the triumph of a static design in a dynamic world. The design of the Omni, all the way down to its mechanical components has remained unaltered till date, even though the initial versions were so basic that the dashboard didn’t even have a fan blower opening as standard. Omnis have supported our everyday lives, the LPG taxis gave us an economically feasible mode of  public transport and  Omni Ambulance - the “Omni E”, made sure we get the attention we need ASAP. These also happen to be the most common ambulances found in Indian cities.So here is a look into the history of Maruti Omni.

Since its inception, Maruti has only ever had a 796 cc inline-three engine and sliding doors in addition to the hatchback, which provides ease of access. the same engine made its debut in the Maruti 800 city car, which was launched only a year before the Omni in 1983. This was an important milestone in the history of MSIL and the then prime minister Mrs. Indira Gandhi visited the Gurgaon factory on Dec 14th, 1983. She gave away the keys of the first Maruti 800 to the first customer, Mr. Harpal Singh and she was also presented with a  model of the Maruti car in silver filigree work.A year later the iconic company rolled out  its second car- the Omni, which was sold simply as the Maruti Van back then. The car was renamed as the "Omni" in 1988.

In 1996, Maruti released the Omni (E), which was an 8-seater microbus version of the Omni. About a decade after the car was renamed as the “Omni”, it received a facelift in 1998. The black grill and round headlamps were replaced with Square headlights. The mechanical components of the car remained unchanged but the exterior dimensions consistently received updates to enhance the appeal of the car and meet the diverse variety of customer requirements. A variant with an extended roof was also introduced by Maruti to enhance the interior space.

Omni excelled in both of its categories, be it  the the family commuter or the cargo version. The family version came with two extra seats located behind the driver's seat and faced towards the rear of the van making it an eight seater. A LPG variant was released in the year 2003, named Omni- LPG. The car still featured the same 796 cc engine, and came with a factory fitted LPG Kit, which was  authorised by the Indian RTOs (Regional Transport Offices). With this alteration Maruti omni went on to be the most economic four-wheeler in India, in context of driving costs. Even the older variants were easily customizable to incorporate these features.

To cater to the immense demand of an inter-city cargo vehicle, spawning from the growing popularity of this car, Maruti launched the Omni Cargo LPG in 2004. In this cargo version the rear seats were removed to facilitate the incorporation of a considerable cargo space. In 2005, further minor revisions and improvements were introduced to the exterior and the interiors of the car. Omni was made available in new new colours. This version of Maruti Omni was also mechanically identical to the original Maruti van of 1984.