for Celeste 1.5 TDI Highline AT

The Polo and Vento have received a lot of attention from Volkswagen in the last two years. The Vento now gets the familiar VW face. It looks more like the Jetta now. The Vento now gets more prominent creases on the hood, which by the way, has grown in length. The grille is now bigger than before, and wider, too. The bumpers have been redesigned, as have the headlamps and the fogs. Inside, not much has changed apart from a slight difference in the upholstery colour combination. Bluetooth, Aux-in and USB connectivity has been carried over from the outgoing Vento. VW has left out a reverse cam even with this update. A reverse cam is now almost standard for this segment, but clearly, VW thinks otherwise. The Vento gets nearly no changes. It can still be had with the same 1.6-litre petrol, the 1.2-litre turbo-petrol or the 1.5-litre diesel engine, mated either to a five-speed manual or a seven-speed dual clutch auto. The automatic gearbox is the best in this price bracket, and far more advanced than its rivals. In terms of drivability, too, the Vento is top dog. Solid German engineering has resulted in sound dynamics. 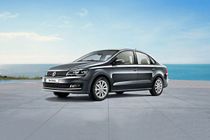