The Volkswagen Beetle is regarded as the first true people's car. It was really affordable, very reliable and provided a way of motoring to many families and was the first car of many households, and most importantly, it's design has been written in the books of history. This should come as no surprise considering the fact that it was designed by Ferdinand Porsche, the founder of Porsche itself. The above paragraph can be written with a few minor changes about the Maruti WagonR too. The Wagon R is spacious for the front and the rear passengers as well, and when needed, it would gobble up your luggage for a weekend getaway. Its design may not go down in history as a memorable one, but its 'tall boy' stance definitely will. It gave the Wagon R a lot of headroom, and if you look at it, the extra headroom did more than just to accommodate tall people. It gave the cabin a big, airy feel and it made ingress and egress really easy. In fact, in some parameters, it might trump the Beetle. The Beetle didn't have a good amount of luggage space and the sloping roofline, as one might expect didn't translate to a lot of headroom at the back. Let's come back to the WagonR then. EXTERIOR: The looks department is not exactly the WagonR's strong point, and let's be honest, it won't turn any heads. However, the large headlamps and the tall taillamps complement it's tall-boy stance really well. The wheel arches aren't too deep, however, they don't even need to be, given that the WagonR features 16-inch wheels. It must be noted that the relatively small wheel arches do not make the car look disproportionate at all. The doors get a plastic cladding, and the Lxi variant features roof-mounted rails. They're there just to help with the aesthetics of the car, don't expect to mount your canoe on it. *Thoughts after 13 years of ownership: Sure, in this age when Euro-spec models are hitting the Indian market, it does look very boring. But, as a true car lover and having spent almost an entire childhood inside this car, it is now a part of the family and honestly, I don't really care. INTERIORS: The interiors have a lot of cubbyholes and there is no shortage of storage space. You can store everything neatly in your WagonR, that too within the reach of the driver. It's got space to accommodate newspapers, cups, water bottles, and even loose change. Here again, don't expect much in terms of features or gizmos. The interiors feature a heavy use of hard plastics. The glove-box isn't one of the neatest around and uses some pretty basic mechanisms. The AC is powerful to cool the cabin, but expect some drop in efficiency when it is turned ON. *Thoughts after 13 years of ownership: The interiors sure are bland, but it is no doubt that they are really spacious. The buttons and dials haven't aged a bit even after extensive usage. Also worth mentioning here is the fact that during the 13-year long run of the vehicle, the Air-Con has never failed my family. Even the gas in the AC hasn't been changed, all it has asked for in the name of maintenance is to just rinse the outer surface of air channels with water that any servicing station will do free of cost. Ride: The car rides really comfortably over paved road, as well as potholes. Sure, some larger ones would cause some trouble, but overall the suspension does a good job. There is some considerable amount of body roll that is generated when cornering fast, but that is something that you will almost never do with your wife and kids inside the car. Long rides aren't tiring in the WagonR because of its suspension and its space. *Thoughts after 13 years of ownership: No replacement has been necessary for the suspension department either. Just the shock absorbers have been replaced twice during the life of the vehicle. The ride may get a bit bouncy at high speeds, so think twice before crossing the double-digit speed mark. Engine and Gearbox: The 1.2-liter MPFI engine is really adequate. It will get you to most hill-stations without any hiccoughs. The engine, although just enough on power won't get you any wins at drag races between traffic lights. The ratios on the gearbox are laid out really well. The shifts may feel a bit on the rubbery side, though. *Thoughts after 13 years of ownership: The engine has aged really well, it has required no fixes except the rare timing and tuning. Even when the engine was a decade old, it took 4 adults and 1 child plus their luggage of 4 days to Auli with relative ease. However, after 13 years, the engine finally strains in producing acceleration with the AC ON. Final Verdict: The Wagon R when new was a truly amazing car. It was the beginning of the era when the kids 80s were going out to buy cars from Maruti Suzuki, and their kids were bonding with the brand. Every WagonR sold in 2003 assured its buyers a worry-free decade of motoring, and it assured their kids a toy Wagon R, which was presented as a gift from the dealer rather than a freebie. Clever marketing, it is. 13 years after the beginning of this beautiful relationship, the car is finally breathing its last. We live in Delhi, where the AC is really necessary. The car fails to accelerate up the flyovers or get a good pick-up with the AC on, which is why we are about to replace it. Other than that, there are no issues whatsoever with the car, and needless to say, it is going to see more night drives and will remain a part of the family.

Hello people, I hope you find my review helpful. :) If you have any queries regarding the 2003 WagonR, feel free to contact me: samar.rawat1998@gmail.com

Sir, thank you for your feedback. Im going for the same car. Can you please advice the make and model and more details of your wagon R car you purchased. I want to buy the same. Waiting for your reply.

4.4/5
Based on1265 User reviews
Write Your Review
Wagon R Reviews 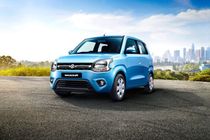