Most Important Bad Things In Brezza That No One Notice

Most Important Bad Things In Brezza That No One Notice

The things that are mainly not satisfied in Brezza are -1.aerodynamics(when I'm driving above 70km/h speed I'm observed air noise from sides even my windows are closed, they are due to bad aerodynamics design, the air totally pushing the car backwards resulting free less running of car and decrease in mileage due to opposite force of air, 2.sunlight reflecting from dashboard on front glass(when I'm driving in sunlight my whole dashboard is visible on front glass resulting bad view of road and I'm unable to see the road clearly, it is also reflecting on speedometer, I'm also unable to see speedometer, these are very dangerous aspects which can be threat to life's) 3.turbo lag(Brezza has too turbo lag which is so horrible to cruse after shifting gear, but after 3000 rpm it cruses like no other) 4.ABS functionality(the ABS was not working as accurate as other car manufacturers in the market, I think they just added dummy components).The things I like in Brezza are built quality of body and interiors, peaceful lite driving, mileage friendly tunning of the engine but huge turbo lag,looks.

4.3/5
Based on214 User reviews
Write Your Review
Vitara Brezza Reviews 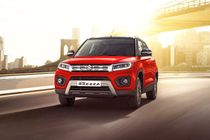 On Maruti Dzire :- Exchange Bonus up to Rs...