Published On Feb 26, 2013 By Rahul for Volkswagen Touareg 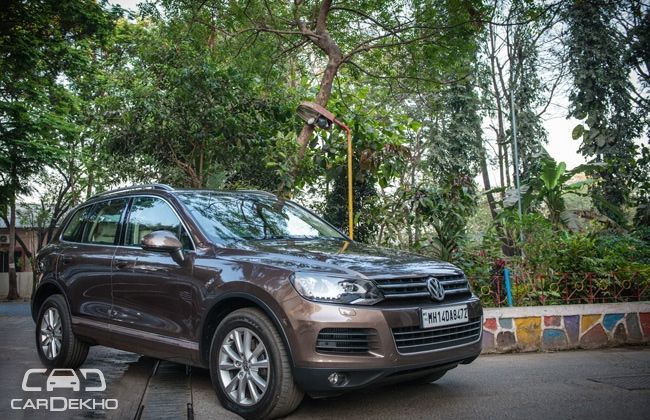 The Dakar rally is one of the most difficult rallies ever, and to have a good finish makes it a heritage. The same has happened with the car here in question— the Volkswagen Touareg . The Touareg has had a strong history in the Dakar rally since its entry in 2003. The SUV has been known for its off-roading ability and also the great reliability it showcased in Dakar.

Recently, the German auto giant had launched the new generation of the Touareg . India also got this new SUV, thus expanding Volkswagen ’s current Indian portfolio. As most of the luxury cars are low slung, people generally prefer buying SUVs. So, for those looking to buy an SUV in the mid-level luxury, we could have another good option for you. Read further as we share our driving impressions.

The new Touareg gets Volkswagen ’s new fascia look, which the entire family received.  The snout gets the twin chrome strip on the front grille with the large VW badge embossed at the centre. The headlamps also have a belligerent stance with the daytime running lamps. The lower-end of the front bumper is matt black as this is ideal to avoid paint from peeling off, while off-roading. The front fog lamps feel are bit too low and only if they could have been higher.

The side profile of the new Touareg is clean with chrome roof rails and flared wheel arches. There is a haunch just above the rear wheel that complement to the muscular look of the SUV. The B and C-pillars are blacked out while the DLO gets a chrome strip around it.

The interiors of the Touerag feel similar to that of any Volkswagen, as it gets a large touchscreen at the centre and the typical three-spoke VW steering wheel. The steering wheel gets a fake polished wooden finish on it, which looks good in low light.

The steering wheel is small and easy to chuck around. The instrument panel is similar to that of most of the Volkswagen interiors.

The god bit about the Touareg’s interiors is that it has a lot of features with minimal number of buttons to avoid confusion. The touch screen gets features like radio, media player that can play music from aux-in, SD card, CD player and even streams music through Bluetooth. It also gets low torque, suspension stiffening and even the option to raise it.

The other good bit is the space that the SUV offers in the front and rear row. There is good enough space for your head and knees and even the thigh support is decent for the rear passengers.

The front seats are electrically adjustable with memory and they wrap around you like a bucket seat. To our dismay, the steering adjustment is manual. The boot is large enough to put luggage for five people with easy.

The rear seats can also be flipped down from the boot and also the fact that the rear of the car could be lowered if you need to load something heavy into the boot.

Volkswagen has plonked in a 3.0-litre V6 diesel engine in the Touareg. We are smitten with this engine as it powers several cars from the VW Group including Audis and Porsches. This V6 oil burner froths 242bhp of power and 550Nm of whooping torque.

The low-end torque is decent and it has a strong mid-range. There is a bit of whining from this oil burner at low engine speeds, but that’s about it. The engine is powerful and quick as it capable of clocking naught to three digit figures in less than 8 seconds. The performance of the engine is strong, and when you step on the gas pedal there is a slight hesitation from the eight-speed transmission and once the correct gear is engaged you are good to go. The eight-speed transmission has tall gearing in overdrive for efficient cruising on the highway. The eight-speed transmission and all-wheel drive are standard features on this Touareg. The off-road mode, puts the Touareg into low range for easy off-roading.

The Touareg has decent and comfortable ride, it is surprisingly more planted in the sport mode set-up as in the comfort mode it does get a bit wallowy and a bit jittery. The normal mode is decent too. The suspension does a good job of ironing out most of the road shocks. It doesn’t break stride and offers comfort to the occupants.

The sharp steering response makes the handling of the Touareg agile and feels like a small car. The permanent all wheel drive and the meaty 255/55 tyres always provide lay ample of rubber on tarmac providing adequate grip. There is a bit of body roll, but the ESP cuts it off. This is a joy to drive around bends just like most of the Volkswagens.

The Volkswagen Touareg is a good SUV to procure, it has rich wood and metallic accents, powerful diesel mill, all-wheel drive, good driving diminuendos and comfort and luxury. There are some more premium badges available at an extra cost, but what the Touareg boasts its recently created wins in one of the world’s  most difficult rally championship.