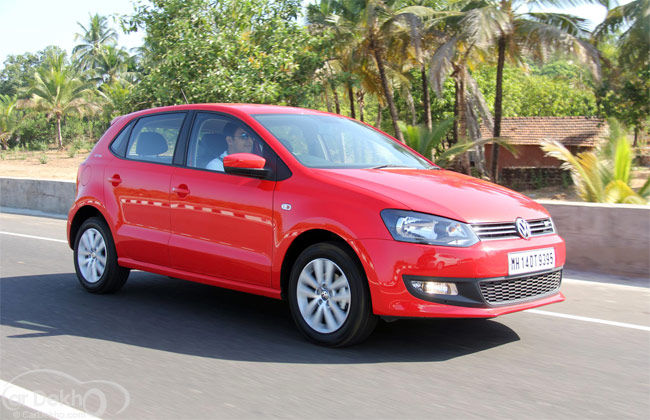 Recently we drove the Toyota Etios Liva TRD Sportivo, which is one of the new performance hatchbacks, and now we get our hands on the Volkswagen Polo GT TSI.

The Volkswagen Polo is the smallest VW that is sold in India and was till now available with a 1.2-litre petrol and diesel engines. The company had introduced the 1.6-litre petrol Polo, as a performance option, however as it had a bigger engine, its duty was higher and hence was the final price tag.

To cater to the enthusiasts and those looking for an efficient automatic hatchback, Volkswagen has introduced the Polo GT TSI. We share our first-hand experience with this new version of the Polo TSI.

Volkswagen Polo had recently received some minor upgrades on the outside and the company has added a few more changes to make this version differentiate from the rest. The GT TSI is the flagship version of the Polo range and it gets GT badging on the front grille.

The side profile of the Polo GT TSI has no differentiating factors except for the GT TSI vinyl on the C-pillar. The rear gets GT and TSI badging and nowhere on the car one can see the Volkswagen and Polo badging. There is only the VW logo at the front and the rear. There is also a spoiler at the rear, to add some more sporty character.

The Polo GT TSI comes only in the top of the line trim and hence it gets all the bells and whistles of the Polo Highline. This GT TSI gets the upgrades of the regular Polo, as it sports the new music system with SD card, Bluetooth, USB and aux connectivity. There are also steering mounted controls for easy access to the music system.

The front row seats are large and offer good support for your back and thigh. The front row feels like that of a big car.

The second row has been tight on the Polo, but the engineers have smarty craved the front seats, thus increasing the knee room for the rear passengers.

The boot on the Polo is decently sized for large. These are the upgrades even on the new Polo. Apart from this, the rest of the kit remains identical.

The biggest upgrade on the Polo is the engine. This is the new 1.2-litre four-cylinder engine and it is different from the regular 1.2-litre petrol as that is a three-pot mill. This is an all-aluminium engine and is turbocharged as well. This engine produces 104bhp of power, which is equivalent to the 1.6-litre petrol engine that once powered the Polo. With this engine, Volkswagen gets the duty-cut as the displacement is under 1.2-litre.

Even though the power produced by this engine as same as the 1.6-litre, it is the torque spread that is much better on this new engine. As even the engine is lighter and has a lower displacement, it is more fuel-efficient. The NVH levels are fairly low, except for cold starts when the engine is noisy. The engine screams as it revs above 4000rpm.

The other good bit of this powertrain is the transmission. This is the first hatchback in the country that is offered with a dual clutch box. Another segment first is that it is a seven-speed. The Direct-Shift Gearbox (DSG) has always impressed us, and this one is no exception. The gear ratios on this box are tailored as per the Indian driving cycle for maximum utilisation of power. Blip the throttle, and the transmission responds immediately, and at the time it shifts smoothly while cruising. There is also tiptronic transmission, if you like to make those manual shifts. We sorely missed the paddles shifts. From what we learn, Volkswagen could introduce the paddle shifts at a later stage.

The driving dynamics of the Polo have always been good, but for this engine the company has increased the stiffness of the suspension. This is due to the fact that the engine is more powerful and hence it was tweaked for better handling.

The Polo TSI is definitely one of the best handling hatchbacks, no wonder it is the same chassis that is used in the Polo and is propelled by a lot more powerful engines. Push the Polo through a series of bends and it will obey your steering command. Being a front wheel drive, it has a hint of under steer.

The ride on the Polo is fairly decent and we like the way the suspension soaks up both of the bumps. The ride is settled on bad roads, and even at high speeds. However, it is the roar from the tyre that is a bit loud.

The Apollo Aceleres have a lot of road noise. They grip fine, even when pushed with no sign of squeaking that easily. The only thing we didn’t like was the steering feedback, as it doesn’t weigh up even at high speeds.

The Polo GT TSI is a powerful and efficient petrol hatchback to buy. Now, all depends on how does the German auto giant price it. If we can see a lower trim variant, this will make such an amazing technology available even at a lower cost.