An apt phrase that would help describe these two machines that belong to the same family, but compete against each other in the executive saloon category. Outright “German”, it’s the recently launched Skoda Octavia versus Volkswagen Jetta; which one of them is the most potent out of the two is what we intend on finding out. 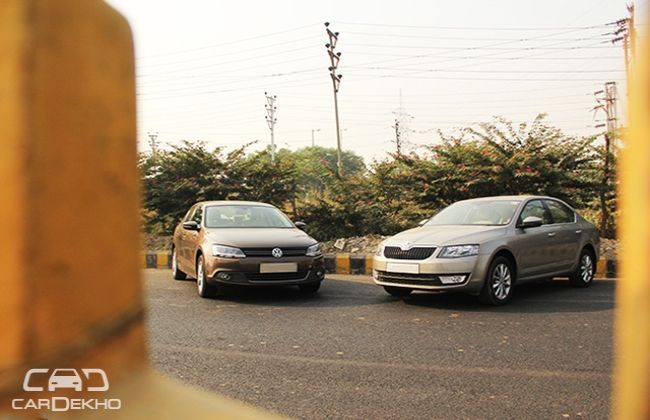 Most of the avid auto enthusiasts would probably know this but for those of you, who are not so clued into the auto world, Volkswagen actually owns many famous brands such as Porsche, Lamborghini, Audi, Bugatti, Skoda to mention a few. The mere mention of this fact justifies the above headline that explains the proximity of these two products that share the same genes, but have different characteristics to offer.

The third generation Octavia is the most recent one out of the two, to be introduced into the Indian market. Therefore, what one experiences is a more up market look on the Octavia in comparison to the Jetta which does not seem outdated from any angle. Skoda’s new design philosophy has definitely given the Octavia an edge over its competitors, the new honey comb grille with its updated logo forms the focal point of the front end design along with a combination of elegant headlamp clusters comprising of Xenon headlamps. Jetta on the other hand brings forward solid German built with stylish aesthetics especially, its front fascia which looks very sharp and edgy. Having said that what it lacks is Xenon headlamps which are a negative aspect of this sedan. Individual side profiles are pretty similar to each other, but the 16 inch rims for the Octavia with 10 spokes looks sportier than the 5 spokes one’s on the Jetta, that seem more elegant. Their rear ends are distinctive in their own way as the Octavia seems more like a grown up Rapid with its diamond cut bootlid which incorporates elegant looking tail lamps. While the Jetta comes out to be more premium especially due to its horizontal tail lights that seem to have been inspired from Audi A4. As per their dimensions, the latest entrant is longer in length and overall wheelbase as well as lighter due to its new platform.

Since they are siblings at the end of the day, their cabins are identical in terms of the layout. However when it comes to the instrument panel and the front dash, Skoda offers new elements such as a new touch screen music system which offers more functions than that off the Volkswagen. The dials on Czech sedan are more upmarket and sporty in contrast to the German. Both offer steering mounted controls, but the only difference here being that Octavia is a four spoke while Jetta is a three spoke. Rest the beige and black interiors are common between the two, however supreme built quality provides VW an edge over Skoda. The air con controls feels more premium on the recently launched sedan in contrast to the existing one. In relation to comfort both cabins are reasonable in providing ample of head, shoulder and legroom. Coming to boot space, there is a reasonable difference with Octavia offering 590 litres while the Jetta provides 510 litres, thereby the difference being of 80 litres.

Speaking of power trains essentially, they both offer the same 2.0-litre TDI mill with a slight variation in their tuning. For example the Octavia produces a maximum power output of 141bhp in contrast to the Jetta which is offering 138bhp. Having said this, the torque available on both machines stands at 320Nm. In relation to the drive, the Octavia’s engine comes across as more responsive and refined especially at a higher RPM. This in fact is a plus point for city use as getting in and out of traffic can be a quick affair in comparison to the VW which is a bit slow especially lower down the revs. On the highway both perform reasonably well with the Jetta feeling more solid than the Octavia. Their mid range is pretty strong as both sedans can rev up to 5000rpm without much of an adieu. With six-speed manual transmissions on board, both vehicles provide decent gearshifts for apt road performance.

When it comes to handling each one has its own distinctiveness. The Octavia provides a light steering wheel whereas the Jetta has a heavier one posing a threat to easy maneuvering. Rest when it comes to countering turns and curves it’s the younger sibling that comes out on top as one feels more in control in comparison to the light weight sedan. Ride quality is better on VW in relation to Skoda especially the rear than provides oodles of comfort even while going over potholes and broken surfaces.

On the whole, the latest generation Skoda Octavia comes across as a sedan that’s vibrant and up to date in comparison to Volkswagen Jetta. The former is agile when it comes to acceleration and performance output; however in regards to handling with its heavy steering feel, the latter feels more convincing especially while taking on sharp turns and curves. Therefore if you’re on the lookout for something that catches the eye instantly then Skoda is meant for you otherwise the Jetta with its understated looks provides better built quality and assurance on the road.