Published On Feb 23, 2020 By Nabeel for Toyota Vellfire

MPVs were only seen as utility vehicles in India. Not anymore. 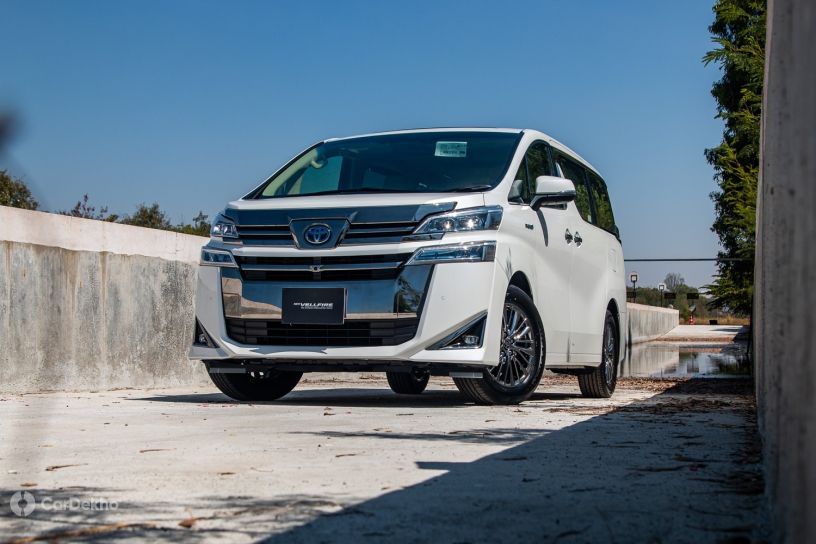 Paying Rs 79.50 lakh (ex-showroom India) for a van seems a bit absurd. Especially when the badge on the massive chrome grille is a rather familiar one. A utilitarian one. But, open the giant sliding door and what greets you is something unexpected of the oval T. It’s luxury unparalleled in the current crop of MPVs, including the one which wears the star insignia.

The seats can make a 747’s business class couch feel envious and there is plenty of space and practicality to appeal to the left hemisphere of your brain as well. But can you justify spending close to a crore on a Toyota MPV which is just a size bigger than the Innova? Should you even bother?

Correct. The massive front split chrome grille is made to look like a Samurai's armour and along with the split headlamps, give it an unmistakable Japanese, in-your-face esque. It looks like you spent big bucks on it, which you’d have. But it doesn't have a dominating presence like the Carnival.

Move to the side and the shark fin-like B-pillar adds a bit of flavour to the otherwise plain profile. The glass area is massive and the rear window wears wraparound glasses which lends it a clean look. Wheels are 225/60 R17 units finished in a dark-ish chrome and do justice to the overall look of the MPV.

Speaking of size, it's important to mention that the Vellfire, though huge, isn't the biggest thing out there. In fact, both the V-Class and even the more humble Kia Carnival are longer, wider and have a longer wheelbase than the Jap. But, the Vellfire has them beat in terms of height.

At the back, you get a very MPV-like profile. Full marks to Toyota though for spicing it up with the taillamps. They get multiple rectangular LEDs and the fat chrome bar complement the profile well. The indicators are dynamic as well and look rather sharp. Overall, the Vellfire does look like an MPV from the future, for the rich. “For the rich” being the keywords.

If you have even more money to spare on a luxury MPV, check out the Lexus LM 300h instead. It's the same MPV, but with a Lexus tadka. Thank me later.

Step in, will you!

Of course, and that too in the second row. Because that's where the Vellfire will justify its asking price. Like most large MPVs, the side doors are powered and slide back. And the sight they open is the one you get when you sneak a peek into the business class cabin on an international flight. In fact, Toyota says the car has been designed around the seats, and it definitely shows.

You get two upholstery options - black and Flaxen (beige). The seats themselves are massive. Separated not just by armrests, but an entire seat structure. The moment you bum hits the base, you know this is going to be a comfortable affair. The cushioning is soft and you kind of sink into them, like on a sofa. The armrests are tall and also get a soft leather upholstery for added comfort. The entire seat is dressed in leather and reeks of aristocracy.

When it gets to seat adjustment, the Vellfire really takes the game ahead. Because flip open the outside armrest and you find a control panel. This lets you recline the backrest, adjust the angle of the footrest and even extend it - all electrically. Plus, you even get two memory settings so you can set one for an upright commute, and another one for lounge, and swap between them with just a touch. However, the horizontal sliding is manual. Understandable as the only way to get in the third row is by moving the second row seat forward, and that will take a long time if it was powered.

You even get heated and cooled function for second row seats. This is a godsend for Indian summers and is not present even in the limousine class of sedans in the country. You get your own spotlight reading lamp, again controlled from the armrest control panel. The headrests are unique too, and are very comfortable. Their sides can be adjusted and made narrower, making it easier to sleep in. Controls for the rear climate control are placed just ahead of the sunroof and are easy to reach from the boss seat.

These large seats can accommodate large people as well. With just the second row occupied, both the passengers can stretch out fully behind the driver and the co passenger with just the toes touching the front seats. And if you have someone in the third row, you just have to be mindful of the recline because there is absolutely no lack of legroom. Two 6 footers, behind one another, no problem at all.

Dial all of this together and what you have in an in-car experience unlike any other car we have sat in before. What makes the experience even better is the rear seat entertainment package. There is a 13-inch monitor which folds down from the roof and can be adjusted for tilt. It can take inputs from HDMI or phone mirroring for your video playbacks, or give you the option to play an FM, or tracks from a compact disc. The sound output comes via 17 JBL speakers which fill the cabin nicely. That's something you don't even get in a first class aircraft cabin.

It's good news that to make space for all of these features, practicality hasn't taken a backseat. Both middle row passengers get folding cupholders in the armrest, there are tables which also fold out of the armrest, and there is storage for the rear monitor remote and a phone, again in the armrest. The front centre console gets a large storage and even at the back, there is a large storage box and a small one as well.

A weird and rather sad miss for the rear cabin is any sort of charging option. You do not get a 12V socket, USB port or 220V laptop charger at all. The only available 12V socket and USB port are in the front armrest. So be prepared with long cables.

How much luggage can I carry?

That depends on how many people are onboard. The rear row occupies most of the boot space. However, that can be folded down, and luggage can be kept over them. But, that is not the ideal solution. The seat can all be flipped up and pushed to the side, just like in an Innova. But then, this limits the recline available for the boss seat. There is about 140 litres of space available below the floor as well, but that too holds the spare wheel, and isn't geometrically cut to hold large suitcases. Laptop or smaller bags can easily be accommodated there. Boot space surely isn't the strong suit of the Vellfire.

I heard it can drive purely on electricity?

Well, for 60 percent of your drive time, yes. The Vellfire gets a self charging hybrid system which comprises 2 electric motors, a generator, and a 2.5-litre petrol engine. There is a computer brain which decides, depending on the driving condition, whether to give the Vellfire a pure electric drive, a pure ICE drive or a mix of both. The electric motor on the rear axle only comes into play when there is a lack of traction, and the vehicle needs to go into a four wheel drive mode. The generator keeps on charging the batteries so they barely ever run out of juice. And these are Nickel Metal Hydride batteries (not Lithium Ion) which support better rapid charging and discharging.

But, like we mentioned, Toyota claims no matter how long your journey, the approx division between pure EV vs ICE will be close to 60:40. Hence, you get a claimed mileage of 16.35kmpl. For all the number crunchers, here is a long list of engine and motor outputs.

Our drive of the Vellfire was limited to a small test track inside Toyota’s facility, and with a speed limit of 60kmph. During those runs, the vehicle pretty much always stayed in EV mode. The ride quality on the smooth test track did feel a bit jittery and stiff, as expected for a mammoth MPV. Body roll too was being easily felt in the second row. It's really hard to comment on how it will behave in the real world. So let's leave that out till we get it for a road test.

You’ve mumbled on for 1536 words! Just tell me should I be spending upto a crore on a Toyota MPV or not?

If this question is even slightly arising in your head, the Vellfire isn't right for you. Because it is not for someone who is looking for a spacious and luxurious car for the family. Or for someone whose buying decision is influenced by what their Polo club members would think. For those buyers, there are plenty of SUVs and sedans at that budget which will better fit the bill.

The Vellfire is aimed at the buyer looking for a comfortable and opulent experience for himself. This car should not only set him apart from the rich crowd and make them envious, but also pamper him with luxury. And to this buyer, it doesn't matter what badge is on the nose, what matters to him most is the fact that he has something exclusive and extravagant.

The only sad part is that the Vellfire could have been the ideal upgrade for almost every Innova owner in the country. But because it is a direct import from Japan, it remains exclusive to the very few who can not only afford the Vellfire, but have the courage to look past the badge on the front when spending a crore.