Tata Motors had introduced the Indigo Manza, as the second generation of the Indigo. This was a completely different and new shade of the Indigo. Not only was it more prevailing, but also more stylish and contemporary when compared to the outgoing version. 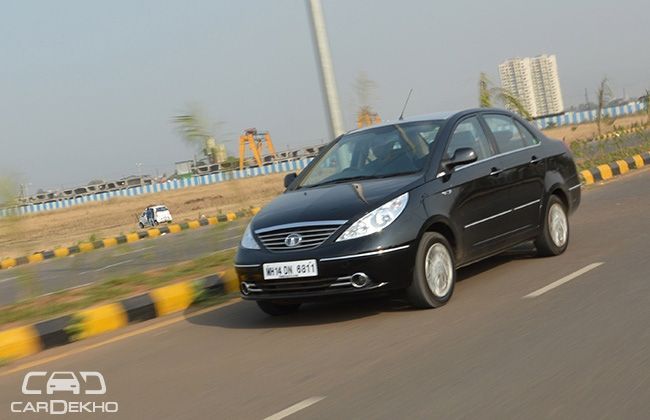 Tata Motors did phase out the Indigo, but the Indigo XL and the Indigo eCS are still on sale. Recently, the company titivated the Manza and also tagged it with the Club Class label. The result was a revision in the product to make it look and feel more sophisticated than before and also when it is compared apples to apples with any of its competition.

We get our hands on this new Tata Manza Club Class, and also share our review on it. Read further, as the mystery unfolds.

The exterior design of the Manza hasn’t really changed. It is the same vehicle with every thing the way it was. The front grille has the same horizontal chrome slats with the triple barrel headlamps. Even the side profile remains untouched. However a new set of alloy wheels is added to the design. The other change has been the different coloured roof, which makes it look stylish than before. This touch seems to have been picked-up from the sister concern company, Land Rover— recently seen on the new Range Rover, which will be available from December 2012 in India.

The rear also remains untouched, with triangular shaped tail lamps and a thick chrome strip on the boot. Also, there is a thin chrome strip on the rear bumper as well. Tata has changed the badging on the Manza and now the Quadrajet is written as Q Jet. Apart from this, the rest of the kit on the Tata Manza remains identical.

The interiors of the Tata Manza are where a sea of changes has been made. The levels of quality on the inside are also enhanced and today, the Manza does look and feel much better on the inside than most of the cars in its competition. The top of the line version gets dual tone interiors with a combination of black and plum.

The music system has been revised and a new touch screen system has been added. This system has navigation, USB, Bluetooth and aux connectivity. This looks are also more contemporary and does add some more glam to the interiors. Now, the Manza interiors also get climate control air-conditioning. The seats are now wrapped in well-bolstered Italian leather. This gives the interior a very lounge like ambience.

The interiors are now amazing and a great place to be in. What else has improved, is the insulation of the cabin. Hardly any engine noise and any outside noise intrudes inside. The Manza on the inside, now feels like a German car making it feel isolated from the outside world the moment you step inside and shut the door. Also, the switches and buttons are lighter to operate than before. Even the direction and wiper stalks are lighter than before and smooth.

As this is a facelift, the dimensions of the vehicle aren’t changed. This means the same comfort is retained on the inside. The large front row seats are very cosy; when you crawl into the rear ones there is acres of space for your knees and head. The thigh support is good and recline of the rear seats is more than the Mercedes-Benz S-Class. The added Italian leather is top notch and you do enjoy sitting at the rear, if you are chauffeur driven. Even the massive boot of the Tata Manza can gobble upto 460 litres of luggage in it.

The engines on the Manza remain the same, however the engineers have worked on them to improve the drivability. Also, the company has rebadged the Qaudrajet as Q Jet and Saffire as SF 90. No new additional powertrains are added and the Manza will be available in two engine variants.

We got our hands on the 1.3-litre Q Jet diesel, which is a Fiat powertrain. Tata engineers have made some changes to the gearing, and now the car is more driveable than before. In the older car, the turbo lag was prominent however the drivability has been improved. Now, the engine pulls more cleanly from lower revs than before and even when lugged into a higher gear. Even the engine is more refined than before. Most of the times, you might not even have to downshift for overtaking. The sedan can potter in city traffic, even when lugged into a higher gear. The gear shifts are also now better than the previous Manza, though they are still a tad notchy. The throws are short and the shifts are positive. Even the leather wrapped gear knob adds to the sophistication of the cabin.

The underpinnings of the Tata Manza remain unchanged, however some tweaks are made to it, improving the ride and handling characteristics. The ride remains similar the way it was, smooth and composed. The dampers iron out most of the jolts and bumps on bad and uneven road surfaces.

Even the handling of the vehicle has been improved. The body roll has been reduced drastically, and the handling is better than the Vista also. You can push it around a bend and the tyres will adhere to the road like glue. The steering feedback is a bit slack, but that’s about it. The return ability of the steering is good and it is also light and easy to steer.

The Tata Manza Club Class Q Jet EXL costs about Rs 9 lakh (ex-showroom, Mumbai). This is a fantastic price for which the Manza comes for, making it a great value for money proposition. The Manza with all its brownies is a C+ segment sedan with a price tag of C Segment vehicle. The build and plastic quality, the fit and finish, the features and the pricing for which the Manza comes is definitely one of the best buy in the Rs 8-11lakh range.