The big -boy from the Czech automaker has always been the go-to choice for the seth who wants to lounge in the rear bench while the chauffeur negotiates the traffic. While it was big, luxurious and all that, it never made you turn around and look twice. It was as sensible and sophisticated as the gentleman in the rear bench, with salt and pepper hair. 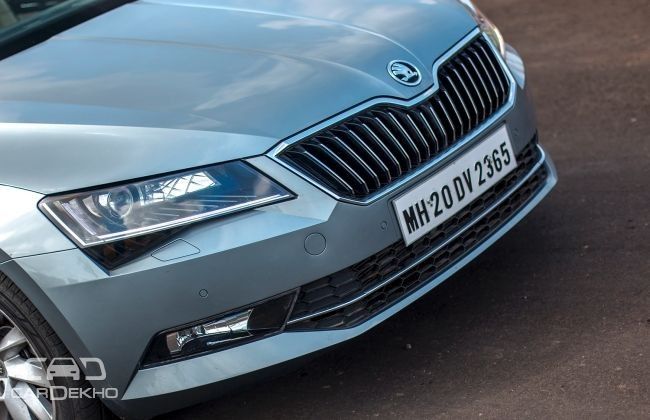 With the new-generation then, you'd expect Skoda to be equally sensible and tweak the recipe just enough to suit tastes of the neo-rich. Well, have they?

For the update, a certain Mr Jozef Kaban was given the pen to sketch it out. For the uninitiated, that's the same guy who designed the Bugatti Veyron. And, boy oh boy, did he work his magic with this one! Is this the best-looking D2 segment sedan on sale today? Possibly.

The curves and bulges of the older Superb have been replaced by razor-sharp lines, that can be found all over the exteriors. There's a crystalline   design theme going, and while it isn't particularly busy, it does have a lot of details for one to take in at one go. In the same breath, it is quite easy to miss a lot of the finer details, such as the crease below the headlamps and the fine line on the rear bumper that connects the tail -lamps.

The front sports the trademark Skoda grille that is flanked by the large projector headlamps. I'm not too fond of the way the daytime running lamps are split into two sections. One smooth line (just like the Audi A7, for instance) would've looked so much better! That apart, it is hard to find elements that look out of place on the Superb. The honeycomb pattern on the air dam, the subtle chrome lipstick on the grille and the wide stance of the Czech makes it an intimidating sight in the rear view mirror.

The side profile shows off the sheer length of the car, which, for the record stands at nearly 4.7-metres! More importantly, the wheels are pushed out all the way to the edges which make way for the generous 2.8-metre wheelbase. The headlamp and tail lamp are connected by an arrow straight line that looks as sharp as a pleat on a well-ironed shirt. The coupe-ish roofline that dives into the notchback and the 17-inch alloy wheels give the car a planted stance. The side is a ballad of straight lines and, yet, the Superb doesn't look boxy or disproportionate.

Over to the rear, the crystalline motif is evident in the tail lamps as well. The rear isn't bustling with elements compared to the front and side, but, does just enough to grab attention. The large hatch takes up most of the real estate at the rear, while a blacked-out plastic diffuser attempts to break the bulk of colour.

Design is a game of proportions and I'm happy to report that Skoda has got it spot on with the Superb. The long nose, the stubby tail and the sheer width make the Czech amongst the few cars that demand your attention.

Step inside the cabin and the unmistakable smell of leather upholstery welcomes you. All seats and armrests are draped in quality beige leather that adds a sense of airiness to an already voluminous cabin. Like most luxury cars, the cabin follows a beige-black combo with a few piano black and silver/chrome accents thrown in for the little details.

Needless to say, everything you can possibly lay your hands on is finished rather well. Unless you go digging into the lower half of the dash, you will be hard-pressed to find rough edges in quality. The design does remind one of its little sibling, the Octavia. The layout is familiar and user-friendly; the touchscreen infotainment system, controls for the automatic air-con and storage spaces are easily accessible.

The Superb gets a large list of features that include a sunroof, three-zone climate control and a touchscreen audio system with MirrorLink, but, my personal favourite has to be the ventilated front seats. When we shot the Skoda, temperatures were hovering around the 40°C mark. Having a blast of cold air blown onto your back while you nestle comfortably in the seats is amongst the best feelings you'll get. Both the front seats can be adjusted electrically and the driver's seat gets three memory settings as well. The cushioning is on the softer side and holds most frames nicely. The comfortable seats and the ventilation does a good job of keeping fatigue at bay, which you will particularly like when driving long distances.

The steering can be adjusted for both, rake and reach. It is a nice, leather-clad, compact unit that is incredibly light. But, more on that later. The instrument cluster gets two large pods that house the tachometer and the speedometer respectively. A centrally mounted multi-information display can be controlled via the buttons on the steering wheel. It reads out practically everything you want to know, including speed, the song that's playing and distance to empty.

The rear bench is where most owners of the Superb will spend most of their time. And, it is no surprise that the car feels that it is built for the person sitting here. Take the 'Boss Button' for example. Two small switches are placed just below the shoulder of the front passenger seat that allows Mr Boss to make himself comfortable. The sedan also gets three-zone climate control, that lets the rear occupants choose a suitable temperature for themselves. Also, one can access the boot directly from the rear bench, through the armrest. How's that?

Issues? Well, for starters, the 6.5-inch touchscreen is rather small for a car this size and stature. Also, the interface is slightly old-school. In today's age of big screens and flashy graphics, the screen does look dated. Also, the internal rear-view mirror is one size smaller than we'd have liked. The sharply raked windscreen and the high-set boot affect rearward visibility as well. While this isn't a problem when parking thanks to the reverse camera, changing lanes on a highway, for example, requires that one extra second and glimpse.

Also, before I sign this section off, I have to ramble on a bit about the 12-speaker Canton audio system. Unless you spend around twice the money, there's no way you'll experience audio quality half as good as this. Of course, you can fiddle with the settings on the system to suit your ears; but, we'd recommend you leave the equaliser in the 'Canton' setting. I doubt the best of audiophiles will have a complaint with this one.

The cabin of the Superb is a wonderful place to be in. It cuts you off from the ruckus outside and lets you enjoy some good music. It is a thoroughly practical car too, there are enough cubby holes inside the cabin to store the knick-knacks and the gigantic 625-litre boot will swallow practically anything you throw at it. For reference, I am a hefty six-footer, and, I managed to fit inside the boot. Yes, I tried! Moreover, little elements such as the felt lining in the door pads and the adjustable ambient lighting make the Skoda feel extra special.

Under the chiselled bonnet, lies a 2.0-litre TDi diesel motor that is good for 177PS of power and 350Nm of torque. This engine has been under the hood of everything from a Volkswagen Golf to an Audi A6, and if cared for well, will soldier on tirelessly for lakhs of kilometres. My only gripe with the engine is the noise level. At idle and on the move, it sounds slightly industrial and unfitting of a car its class.

You can choose between three preset driving modes before setting off – 'Eco', 'Normal' and 'Sport'. There's an 'Individual' mode as well, that lets you set the engine and steering up on their own. Notably, the 'Eco' mode also alters how and when the air-conditioning kicks in, helping you save every little drop of diesel. As long as you're in 'Normal' or 'Eco', ambling about in the city is a breeze. There's no turbo lag that'll annoy you, but, cruise about in 'Eco' and the lazy throttle response at cruising speeds might just come close. In the default 'Normal' mode, power delivery is linear, and there's more than enough torque to let you exploit a small gap in traffic. It feels just about adequate for a car its size.

The diesel engine is available with a 6-speed dual clutch automatic gearbox only. You also get paddle shifters tucked behind the steering wheel as well, which lets you take charge completely. Gear changes are seamless, and unless you go pedal to the metal, you won't know when the gearbox has shifted up. Downshifts are a tad noticeable, more when driven hard.

Speaking of which, if you ever plan on driving the Superb hard – make sure you're in Sport mode. The throttle response is crisper and the feedback from the steering is better. The gearbox will hold the revs much higher, letting you have all that 350Nm of torque at the instant disposal of your right foot. While it is jolly good driving the Superb hard and fast, it tends to get tiring (for the driver) a bit too quickly. It isn't something I'd recommend. Personally, I'd rather set the cruise control to a comfortable speed, turn on the seat ventilation and chug along the motorway happily.

The Superb (and in effect, the guy at the wheel) is relaxed cruising down the highway rather than tearing it up in a fast-paced blur. Don't get me wrong, the car can do that if need be, but it does feel slightly bulky and out of its element while doing it. What remains plush and pliant throughout is the ride. At city speeds, there's very little that upsets the big Skoda – it's only the super sharp undulations that get to it. The downside is the low ground clearance (rated at 149mm for the diesel) that invites underbody scrapes. If you live in a city like Mumbai where a well thought-off speed breaker is an exception and not the norm, you will find yourself cringing as the underbelly says hello to some tarmac.

The ride quality is nothing short of phenomenal, both at the front and the rear bench. It remains planted well past 100kmph as well, and there's not much to frown about, at least when the ride is concerned. Being a low-slung sedan has its own set of advantages in the corners as well. Body roll is well under control and the Superb darts into bends at your command. The steering is super light at city speeds and weighs up well when you hit triple-digit speeds. On a set of twisties, there's enough feedback – if you're in Sport mode that is.

So, let's revisit the first question – has Skoda made the recipe for the Superb better? Well, yes they have! The Superb packs quite a lot of kit for which you'd ideally have to shell out twice as much money. Moreover, the sheer amount of space at the rear bench can put most cars a segment (or maybe even two) above it to shame.

Can a car that costs well over 30 lakh rupees be called value for money? Umm, we seem to have found the first entrant into the list.