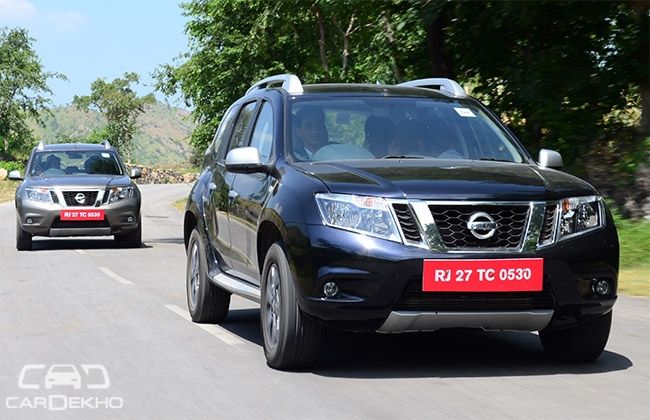 The concept of re-badging isn’t new to India. We’ve already seen Micra and Sunny turning into Pulse and Scala in the recent past, and the car we have tested today, Nissan Terrano, is the third and last shared product from the Nissan-Renault alliance. However, this time, it’s Nissan that is tweaking a Renault product rather than the other way around which they followed for the last two products.

Yes. It does resemble the Duster. But Nissan has tried its level best to give the Terrano some stand-out styling cues that clearly differentiate it with the Renault counterpart. While the overall silhouette remains the same, the frontal end is the area where the most changes can be seen. Sporting an all-new face that’s very in-line with Nissan’s family look, the Terrano looks a lot like the Pathfinder or the Patrol from their International product portfolio, which is not at all bad, at least for me. The radiator grille is all new and is a larger iteration of those three piece affairs we’ve been seeing on other Nissan SUVs in the international market.

With two prominent lines flowing into the grill, its bonnet looks way muscular than the Duster. The lower end of the front bumpers make for a smarter housing for round fog lamps, while the air dam ends in a bash guard, just like the Duster. The inflated wheel arches from the Duster has been retained but the Terrano’s sharper visage reduces the overtly muscled impression, which I never liked in the Duster.

The tweaks on the side profile are less prominent, with curvier door panels and blacked out B and C pillars. Alloy wheels are new as well. And that’s it for the sides. Except the new tail lights, the rear looks similar to the Duster. On the whole, Terrano will grab more eyeballs than the Duster.

The changes in design reflect on the interiors as well. Nissan has put good amount of chrome and silver garnishes in a bid to give the cabin a luxurious appearance. The basic dash layout remains the same, though the company has given some refreshing tweaks including better-looking rectangular air vents, piano accents on the centre console and grippy steering wheel.

The music system is new and the buttons have a more-premium feel to it. The sound quality is also decent, but could have been better. Overall, the build quality is on par with the Renault Duster and full marks to Nissan for that.

The front area is full of useful cubbyholes, providing ample space for the stuff. Whereas the rear, has been left barren, with no storage space at all, even in the door panels.

The Terrano gets a really big boot at 475 litres that’s enough to store luggage for all five occupants. And if you just fold down the rear seats, the space jumps to a capacity of whopping 1,064 litres.

Under the hood, it’s all same. Things might look changed on the outside, but Terrano gets identical mechanicals to the Duster. Which is actually a rather good thing since the Duster is such a potent offering.

We had a spin in the 110 PS top-end XV variant and was quite impressed. This inline-four engine displaces 1461cc and uses a variable geometry turbo. Its max power is developed at 4000 rpm while torque peaks at 2300 rpm.

Same again. The driving feel, as most of us expected, is identical to the Duster. Switch the ignition and the same characteristic clatter that we’ve gotten used to with the 1.5-litre K9K.However, the insulation is notches ahead of the Duster. So, you don’t really hear the unpleasant sounds on the inside, until you start really pushing its limits.

There’s a a fair bit of turbo lag upto about 1500rpm, which is a pain in the city driving. Then onwards, the engine picks up well and strong surge of power moves all the way upto 4000rpm after which it starts to taper. In gear drivability is strong and overtakes in 6th gear are possible at really high speeds.

The ride on the Terrano is sorted and pliant. The underpinnings of the Terrano do a good job of ironing out most of the road bumps and shocks. We drove the Terrano over several rough roads, however the suspension ensured that we didn’t have any issues with the ride. There isn’t much body roll despite the ground clearance of 205mm.  The 83bhp has a softer rear and it can be felt while taking corners. The steering response is a bit vague and it isn’t as light as other Nissan’s are.

The Terrano is priced almost half-a-lakh over the Duster. So for the extra money, you get a much better-looking Duster, plus some added features. And even if we consider the Terrano as an all-new product from Nissan, in that regard also, the Nissan Terrano comes across as an extremely good product.