Right since its launch in 1972, the 5 Series from BMW has always been one of the popular saloons around the world. The BMW 5 Series has been known for its stylish design and driving abilities. For your information the initial 5 Series was designed by a well known car designer Marcello Gandini. The initial 5 Series was based on the Bertone 1970 BMW Garmisch 2002ti. Incidentally Gandini was also famous for designing the Fiat 132 and Alfa Romeo Alfetta. The latest 5 Series is now into its 6th generation code named as the `F10. The all new 5 Series has grown a lot in proportions as you will find out in our review. This time around we drive the entry level offering of the BMW 5 Series, the BMW 520d. Read on to know more.

The design of the New BMW 520d received a mixed reaction from the customers around the globe, but we like the new design approach that BMW has incorporated in its new version. The 5 Series is now much longer and wider as compared to its predecessor or for that matter any of its rivals too. Its wheelbase measures 2,968 mm and that pretty long for this segment. The front end is taken up by the all new bi-xenon headlamps with white light sport the trademark Corona ring-type beams in them and also have a white lining on the top. Integrated LED cluster turn indicators in the headlamps, which looks like jewels as they flash. This adaptive light system works equally amazingly as they look. 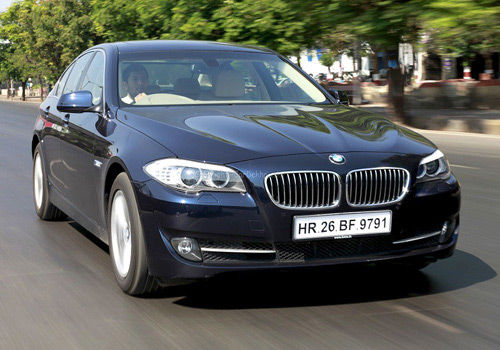 The new front bumper neatly engulfs the upright family kidney BMW grill that has also grown in size. A huge bonnet that has a gentle slope which mates on the grill and the crease on it reminds you immediately of the latest generation BMW 7 Series. Lean side fenders give a very elegant look to the car when viewed sideways, turn indicators on them have also got the stretched look, again reminding you of the ones on the BMW 7 Series in a forward pushing motion design. Doors are huge and are made of aluminum which has reduced 23kgs from the overall weight of the car.

The sides of the New BMW 520d depict sportiness and elegance both unified. The roofline has also gone longer now and has the trademark Fish-Fin radio antenna, which also houses the huge sun/moon roof. The rear end of all BMW cars are sweet to watch and this one adds to the list of the sweetness. The running contours on the sides extend till the rear end where they mate smoothly with the all new rear light clusters. The tail lights have 3 L-shaped lines. These lines look like pipes when they glow with a smooth soft glow to them. The rear again has a cluster of LEDs that collectively work as turn indicators. Short boots are a trademark with all BMWs and the New 5 Series isn’t left out. Underneath the massive bumper are the twin chrome exhaust pipes placed on the left side which again have become a trademark with the BMWs lately.

The overall design from outside is very neat and charismatically concentrated, the New BMW 520d now feels more closer to its elder sibling the 7 Series. Earlier the 5 Series had a sporty stance but this time around the emphasis is on elegance.

Hop in the new BMW 520d and you are instantly reminded of the current generation 7 Series cabin . The instrument cluster is ditto the 7 series which is'nt bad but should make the 5 Series buyer happier. The in-cabin quality is very high, much higher than the earlier 5 Series, switches and knobs have a classy touch. The cockpit is slightly angled towards the driver. The new BMW 520d also gets an all new steering wheel with all the needed multi-function buttons to access the audio, Bluetooth etc functions laid on it. The steering is electrically adjustable for height and reach.

The centre dash with the LCD display to show the i-drive control display and the trademark ac blower vents with the MP3 player below the vents and the multi - zone climate control give a lot of character to the dash. The instrument cluster is clear to read and displays all the needed information on it. Ash- grain brown wood - inserts on the dash and on the doors which further enhances the rich feel inside along with the Pearl Gloss Chrome borders. There is ample storage space all around, the glove box has a 6 DVD changer neatly tucked inside which is an option on the BMW 520d.

The glove box gently glides down with a press of a button for loading the DVDs. The seats are made of high quality leather and are fully electrically adjustable including the front 2 head rest. Seats at the rear too offer perfect support and comfort, designed ideally the seats on the BMW 520d are one of the best we have seen in this segment. The new 5 Series has one of the largest cabin area and maximum leg space at the rear thanks to the extended wheelbase and overall size. The trade mark BMW i-drive gear shifter is fun to use and the new BMW 520d now comes with the 8 speed tiptronic gear box, the electronic gear shifter looks different but once you use it you will find the conventional shifters out dated.

Placed next to the shifter is the now so famous i-Drive dial which acts as a jog-dial to set/control all the functions displayed on the screen, Music, radio stations, car service check, access to the blue-tooth phone functions and also an in-car owners manual which is displayed on the screen which one can refer to as and when needed. An electronic hand brake (parking) button is very easy to use and the auto hold button is also very handy during stop and go situations. A neat storage box in placed just behind the gear knob which has a butterfly like twin opening lid, the AUX and USB ports are in here, this space is also usable to store some important stuff and is lockable. Neat little touches like the electric rear sun curtain and manual rear side window curtain help in keeping the heat at bay.

Unlike the 525d and the 530d the BMW 520d is powered by four cylinder 1995cc CRDI Diesel unit while the others are powered by an 6 cylinder 3.0litre units. This 2.0 litre engine develops 184ps of power and 387 Nm of raw torque. The simple reason to plant a 2.0 litre 4 cylinder engine on the 520d is to make it the most fuel efficient option for someone who wants to drive around in the luxury of BMW 520d and still get fuel efficiency of the 3 series. This is the same engine that also powers the 320d.

On the move the car behaves very sanely until you press the accelerator pedal further. The performance is surprisingly good being a 4 cylinder engine and the engine is very responsive too, and helps make the car very drivable in urban traffic. Throttle response is almost instantaneous and you won’t be left wanting for more power in most situations. The BMW 520d cruises more than comfortably on the highways. This 4 pot diesel engine is one of the best that we have seen and at many times you begin to think that there is a 6cylinder engine under the bonnet. Distinctive BMW character can be easily seen when this engine is at work. This engine likes to be revved like any other petrol engine. The strong area of this engine or the powerband is between the 1900-2750rpm.

We found overtaking and maneuvering on busy roads is super easy and the new eight-speed auto gearbox that again has come from the 7series works harmoniously behind the scene making the gear upshift and down shift totally unfelt. Pick up on the BMW 520d is quick and the acceleration is linear and highly refined. The 520d touched 100kmph in 7.9 seconds that’s mighty impressive for a car this big and running on a 4 cylinder diesel engine. For the total power hungy people well you can use the steptronic mode where one can upshift or downshift through the close ratio 8speed box and can juice out some more power and speed and discover the engine's true capability. The New BMW 520d now has an all new Electronic Power Steering (EPS) as opposed to the non EPS (hydraulic) ones earlier, some may like it some may not cause the feedback is a bit less as opposed to the non EPS ones.

BMW says by getting the EPS system on the engine is left alone and thus its power isn’t used for steering thus further increasing the overall power and efficiency. This system only activates itself when needed by the driver thus further saving the consumption of energy. We have driven quite a few Luxury Saloons in the past and the New BMW 520d easily qualifies in the top 2 cars that we have driven so far. Handling is phenomenon, thanks to the now soft suspension setup that BMW engineers have incorporated. A double track control arm front axle made of aluminum helps in damping out while this set up performs. When you go on a speed breaker or a pot hole this system softly gets the car in and out as though soaking the bump. The XXL 17incher 225/50 R17 tyres further help things here. The BMW 520d responds and handles exceptionally well and is stable at any speeds, remember the new 5 series is closely based on the big brother the 7 Series. All the much needed gadgets like ABS, traction control, dynamic stability control, brake assist are part of the standard package in here. Efficient Dynamics is what BMW 520d is hooting around lately and the New 5 Series is a big part of that package. In this system the Brake energy is regenerated for the use of the cars onboard systems. Electric energy is generated which flows to the cars generator and used later as and when needed.

We were surprised by the fuel efficiency of the New BMW 520d of 13 kmpl is what we measured on this saloon and are sure it can do much better in different driving conditions making it one of the most fuel efficient saloons in its segment.


Verdict
With the New BMW 520d, the German Auto giant has moved away from the traditional 5 Series and more towards the 7 Series. The 520d is the perfect choice for a buyer who wants to drive in the comfort of a 5 Series at the economy of a 3 series. Priced at Rs 36.90 Lakhs ex showroom Mumbai its bang in the arch rival the Mercedes C class and also against its own 330d to some extent price wise. With fuel efficiency figures unheard of in this segment and in cabin comfort levels to the highest thanks to the longer wheelbase the New BMW 520d sure is one of the best options that money can buy if you are looking to get a Luxury Saloon that is highly fuel efficient as well.