As the global sales of the C-Class reaches a new mark of 10 million units, Mercedes-Benz introduces the Celebratory Edition. Even though the Indian market didn't have all the generations of the C-Class, we get this limited edition in our market too. 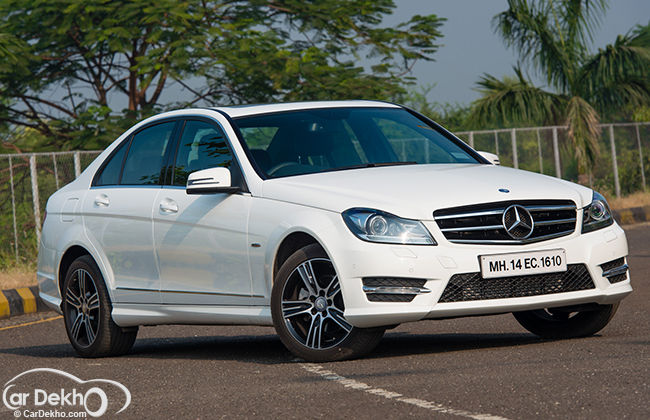 So, how different is this limited edition of the C-Class? We are my smitten to the C-Class as we had the C250 CDI as our long termer for a while, which has just been returned. We take it for a spin to understand how different is it from the regular C-Class.

The C-Class had received a facelift in 2011 and since then we have witnessed the Performance Edition as the only other version on the C-Class. That also had some minor upgrades and the Edition C too has some cosmetic changes. What it gets is an AMG front grille with blacked-out headlamps to give a more sporty look. Also the alloys on this Edition C are picked up from the Black Edition.

Then there are the body skirts and sadly there is no panoramic roof. The C-Class also has the dual  colour with a different shade for the roof, this also goes missing on the Edition C. Apart from this, the rest of the body kit remains untouched. This Celebratory Edition also gets the Edition C badging on it.

The interior styling of the Edition C is the same as the conventional C-Class. The same three-Poke steering with the same instrument cluster. The centre console too is untouched, however what it gets is a new feature of satellite navigation as a standard on this Edition. Else this is an optional feature. The Other upgrade on the Edition C is that leather from the seats is now replaced by micro-fibre for most of the part. The interior upholstery is different with contrast stitching of grey and blue. The micro-fibre upholstery is ARTICO/DINAMICA in Mercedes-Benz's lingo.

Everything else remains the same, as there are no other changes on the inside of the Edition C. It has a single sunroof instead of the dual, and the moonroof can be opened manually. The centre console also gets a silver tone with the black, instead of the wooden finish that is generally seen on the Avantgarde. The space and other features of the C-Class remain the same as this only a limited edition vehicle.

The Mercedes-Benz Edition C comes only in C220 CDI engine and only 500 of these will be made. This is a 2.2-litre Diesel engine that produces 170bhp of power and has the same engine block like the C250 CDI, which was one long-termer vehicle. To be fare, this engine has enough grunt for the C-Class body. The C250 is definitely more powerful but it is more than what is required. The NVH levels of this engine are fairly low as it isn't very loud except on cold starts. Once the engine warms up, the diesel clatter reduces.

The power produced by the C220 is good for city and highway driving. The shifts on the 7G-TRONIC are a bit lazy when you need instant power rush but otherwise it is good enough. The shifts on this box are smooth and the transition from one gear to another cannot be noticed if you are sitting in the passenger seat. One thing that is missed sorely on this Edition C are the paddle shifts. For the pricing the car is coming for, we believe this would have been a great feature to have, as even the cheaper C250 CDI gets it. This engine is bit more efficient than the C250 and can return up to 11-12km/l when driven with a light foot even in city.

The Edition C doesn't get suspension adjustment like the Performance Edition. There is no difference in the driving dynamics of this vehicle. The steering wheel is extremely light making it convenient to drive in city and even on long journeys. The ride is a bit stiff thanks to the 17-inch alloy wheels that come on the Edition C. Bad and bumpy roads aren't much of a joy as the low profile of the tyre means lesser rubber to absorb the bumps. The ride is supple on smooth roads be at low or high speeds. The 16-inch alloys are much better suited for Indian road conditions.

The handling of the C-Class has been good and this is no different. It retains the same good handling, and you can even have some fun as the tail steps out a bit when pushed hard around corners. The response time of the ESP is quick, which means it corrects very quickly if you have made a mistake. The C-Class can do wheel spin if revved hard, as there is a lot of torque generated.

The Mercedes-Benz Edition C is just limited edition product. Hence, it gets a price tag of Rs 39.16lakhs (ex-showroom, Mumbai). Yes, this is steep and if you need something that is special you need to shell out some extra moolah, else the conventional C-Class is available too.