Published On Nov 30, 2022 By Nabeel for Mercedes-Benz GLB

It's been a while but Mercedes has finally brought its baby seven-seater SUVs to the country. Question is, who are they for? 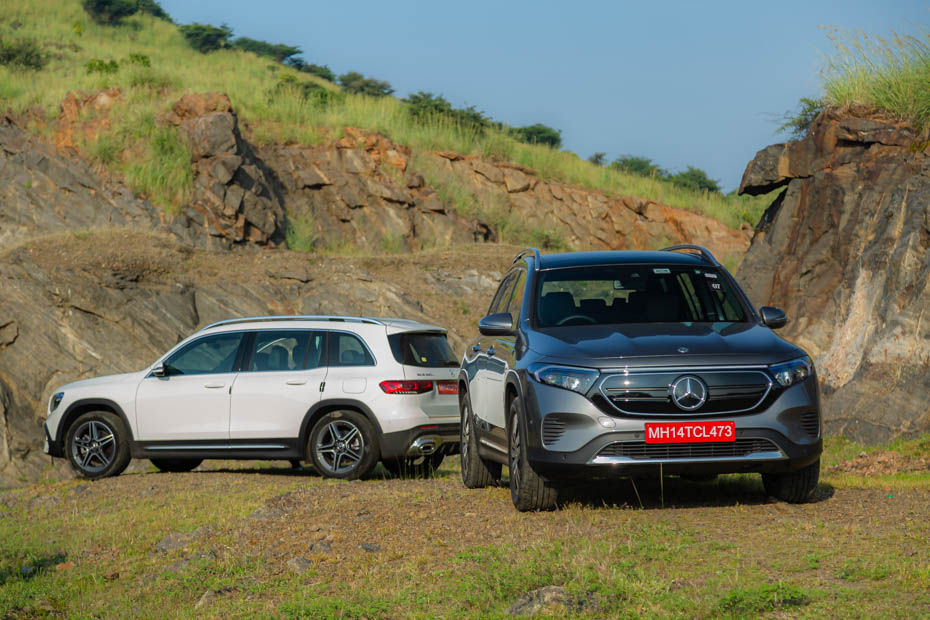 The GLB and EQB, on paper, seem to borrow the best from their siblings. They are based on the pocket-friendly platform of the GLA, sit very close to the GLC in terms of overall dimensions and go on to offer three-row seating like the GLS. But, in combining these formulas, have there been any compromises? And If so, should you consider the GLB and EQB over their siblings?

Borrowing its looks and attitude from the GLS, the GLB also is quite a handsome lad. Its upright stance, tall bonnet with creases and overall boxy shape make it look old school. The front is orthodox with the protruding three-pointed star and even the DRLs are on similar lines as on the GLS. On a personal note, the fake air dams could have been avoided because they don't suit a Mercedes.

From the sides, the three-row intentions are evident as the roof stays flat till the very end. The angular wheel arches and cladding all-around help it look rugged as well. In the AMG Line, you get 18-inch star-shaped wheels with AMG inscription, but they don't suit the car very well because of its boxy design. The multi-spoke wheels in the international markets suit it better. The back is muscular with sleek taillamps and fake exhaust tips and a diffuser. Again, the fake stuff feels unnecessary.

The EQB, on the other hand, looks more sophisticated. It gets a covered grille and even the boot design is simpler. The changes are enough to help it stand out as an EV, while the overall shape is reminiscent of the ‘B’ SUV family.

The interiors of the cars are what we expect from a mid-spec Mercedes. The layout has been borrowed from SUVs like the GLA and GLC, but has a few tweaks. The aluminium finish on the left side does add character to the design and the quality remains premium on all touchpoints.

In the AMG Line, you get nice Alcantara-like upholstery and an all-black cabin which look rather sporty. However, in the EQB, the cabin looks more soothing with a rose-gold theme. Even the dashboard gets a music equaliser pattern which looks cool and funky. The upholstery matches the theme and the quality levels remain the same as the GLB.

The features list is long and you get all the basics like two 10.25 inch screens for infotainment and cluster, dual zone climate control, powered front seats with memory, a wireless charger, 10 speaker sound system, a powered tailgate and a dual pane sunroof. However, at this price, we do miss creature comforts like ventilated seats, a heads-up display and a 360-degree camera.

If you decide to use the GLB as a five-seater, then you have ample cabin space. The seats slide back and recline too, for added comfort. Even six-footers won't have any issue with the amount of leg and knee room on offer. However, while the seats are comfortable, they lack the support which holds you in place. The base and backrest is rather flat to accommodate a variety of passengers. But, if you are looking to seat three, the cabin width will feel narrow.

You get a basic set of features. There are AC vents with flow controls but no separate blowers, a small storage space, one Type C charger and an armrest. The addition of window shades would have been welcome here as they can now be seen in much more affordable SUVs. However, the dual pane panoramic sunroof does enhance the sense of space - especially at night.

While this is a three-row SUV, it is not a true seven-seater. Mercedes clearly states that the last row is good for pre-teens and pets only. As far as space is concerned, adults about 5’5” can sit there with the second row moved forward, but they too will only be comfortable for short trips. There are some creature comforts here as well like phone holders, Type-C chargers on either side and cup holders. However, AC vents have been given a miss.

With three rows up, the space is only good for duffle and laptop bags. Fold the third row however and you get ample space to carry all the weekend luggage you want. Fold the second row and it opens up a whole bed to carry luggage, a house or just camp at a scenic spot.

There are plenty of drivetrains to choose from. Starting with a 1.3-litre turbo-petrol, a 2.0-litre diesel, diesel with AWD and finally the AWD electric with a two-motor setup.

The diesel engine is super refined and barely any vibrations or sound crawl into the cabin. In fact, passengers won't even notice it is a diesel and may mistake it for a petrol. The power delivery remains smooth and the drive is effortless. The transmission is seamless for the most part until you ask for a quick downshift for overtakes. Then, it takes a while more than expected to get you going. Other than that, this diesel motor is more than capable for city and highway duties.

The electric EQB300 uses a dual motor setup but remains primarily rear-wheel drive until you ask for more performance. And like other luxury electrics, this one too is really quick to respond to throttle inputs. It feels alive and overtakes happen in a jiffy. And while the overall nought to 100kmph time is slower than the diesel, its seamless and urgent power delivery makes it fun to drive. The EQB comes with a 66.5kWh battery pack with a claimed WLTP range of 423km. Safeside, you will be able to drive it for 350 km on a full charge.

The suspension setup of the GLB is ideal for Indian road conditions. It manages to soak the bad roads and potholes with rather ease and keeps you calm inside the cabin. You do hear the suspension a bit, but the overall experience is comfortable and plush. Even the handling is surprisingly agile and the steering feels precise. There is no overly apparent body roll to trouble the passengers and the car remains planted on highways as well.

The EQB is about 400kg heavier than GLB but you cannot tell this by the way it drives. The handling remains on par with the GLB but because the suspension has been relatively stiffened up, you do feel the road surface a bit more. It still remains very comfortable and won't give you a chance to complain.

The B family of SUVs will be available in four variants. The range will start with the GLB 200 petrol, followed by the GLB 220d diesel, then the GLB 220d diesel AWD AMG Line and finally the EQB 300 AWD. Prices for the GLB will range from Rs 65 lakh to Rs 70 lakh. And the EQB is expected to be close to Rs 80 lakh (ex-showroom).

The Mercedes GLB and EQB are both very well-rounded SUVs. If you are looking for a family SUV which is versatile and luxurious, these two tick most of the boxes. However, it's the price of these SUVs which is hard to digest. Since they’re direct imports, price-wise, they will compete with larger luxury SUVs like the Audi Q5 (Rs 60.50 lakh), Land Rover Discovery Sport (Rs 65.30 lakh) and the Volvo XC60 (Rs.66.50 lakh).

All of these offer a big SUV feel which the GLB and the EQB lack, though, they have the advantage of a third row that’s handy for parents or pet owners. Between the two, we recommend the EQB because it is a more premium car to drive and offers the ‘X’ factor of being an electric SUV.