The RX 450h is the most radically styled and unique looking car in Lexus India’s range. But does this car genuinely have something unique to offer or is it all about looks alone? 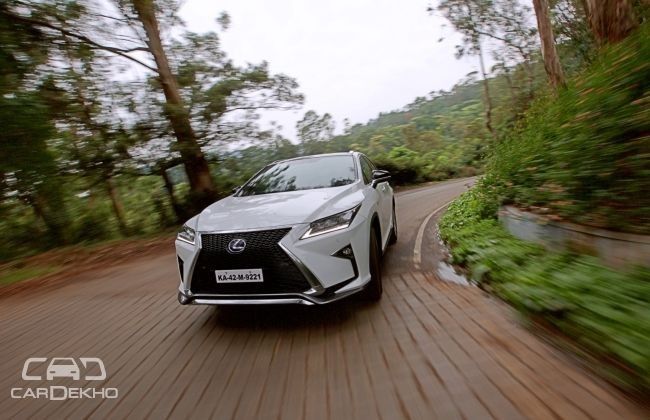 The RX 450h is the most radically styled and unique looking car in Lexus India’s range. However, its asking price and hybrid powertrain put it in a niche within a niche. Obviously, it’s targeted at a buyer who isn’t budget conscious, and wants something special. Does this car genuinely have something unique to offer or is it all about looks alone?

To use a cliché, you can like the design or hate it, but you can’t ignore it. Not only does the RX 450h not have any direct rivals in India, it doesn’t even look like anything you’ve seen on our roads. The crossover styling is perfected to the T and every angle has something noteworthy. Like the rest of the range, the spindle grille occupies most of the space up front and is flanked on either side by sleek full-LED headlights. The fog lamp enclosures slither upwards from the front skid plates and make the RX’s face look more chiselled.

To the side, the wheel design is rather bland, but the character lines give it a sporty edge, while the downward swooping roofline gives it a crouched stance. A major design highlight is the fat C-pillar which incorporates a blacked out section for the floating roof effect. This actually makes the car look a bit brattish – like a teenager with his cap on backwards.

The rear end is the most aggressively designed. The rear windshield is sharply raked and the tailgate mimics the lines of the grille up front. Loud as the design is, it’s good to see that Lexus hasn’t gone overboard with chrome, so even in a bright shade of red, it doesn’t scream for attention.

The RX 450h is quite car-like to get into. It does sit tall, but you don’t need the help of a side step to get in. Once in, you realise that the RX takes a driver-centric approach. The whole centre console is angled towards the person behind the wheel, and truth be told, this is the best place to be sitting in the RX (more on that later). What’s interesting is that while the exterior is edgy and radical, the interior is more sophisticated and low key.

Quality is top-notch and there’s very little to fault. The beautifully machined metal dials for the volume and tune functions feel great to the touch. There’s sumptuous leather on almost every point you’d touch and there’re some 180 different leather and wood combinations to choose from. The RX’s price puts it in the same league as the higher variants of the Jaguar F-Pace and the quality of upholstery and trim material is noticeably better than the Jag’s. The layout is also quite simple to understand, though, like the ES, there are one too many buttons on the centre console.

Cabin space isn’t palatial but adequate. Seating two six footers one behind the other is a bit of a squeeze and headroom is average in the front and rear rows. If you’re around or over 6ft tall, your head will brush up against the roof-liner, even with the rear backrest reclined all the way back. Much like the F-Pace or Porsche Macan, this isn’t an able 5-seater either, and the middle seat is best left for kids.

The rear seats could do with a little more under-thigh support, but that aside, all the seats have comfortable cushioning and adequate lateral support. The rear seats can also be electrically reclined, but the fore and aft adjustment is manual. Prudent to note that while both front seats are 10-way power adjustable in the Luxury grade, they’re only 8-way adjustable in the sportier F-Sport trim. Additionally, the Luxury gets the memory function for both front occupants, but the F-Sport only gets it for the driver.

Speaking of the driver, the steering wheel feels great to grip and the integrated buttons have been neatly laid out, while offering a tactile feel to use as well. The steering itself gets the heating function and if you opt for the F-Sport, you get paddle-shifters too. While the Luxury grade gets a similar, all-analogue instrument cluster as the ES 300h, the F-Sport offers a sportier setup which includes a G-sensor.

On the feature front, the RX 450h gives you kit like ventilated front seats (both heated and cooled), a sunroof with an electrically operated sunblind, and two-zone climate control. It also gets a powered tailgate with an emblem sensor i.e. when the vehicle is switched off, you can get the tailgate to open by holding your palm near the rear Lexus logo. An interesting feature, but not particularly useful if your hands are full of luggage. Unlike the ES 300h, you don’t get a separate zone of climate control for the rear seats, nor is the rear armrest as wide. However, you do get rear AC vents, heated rear seats and manual sun blinds to the sides.

Storage space is quite generous at 453-litres and you really can use all of it. Yes, you do get a proper full-sized spare tyre, but it has thankfully been placed under the boot floor. That does result in a little floor hump, but it doesn’t hamper usability by much. Additionally, the boot has baggage hooks to the sides and the rear seats can be electrically dropped to free up more storage space. To protect your golf clubs from prying eyes, it even gets retractable parcel tray.

The RX 450h gets a similar infotainment interface as its sibling, the ES, but gets a larger 12.3-inch screen diagonal. The display itself has been integrated in a way that it looks free-standing, and the large display makes it easy to read for all occupants. This display can even show multiple functions simultaneously, so you play music on one part of the display while looking at some brief car information on the other. The joystick dial to use the system, though, certainly takes some time to get used to as it is quite sensitive and can get tricky to use on bumpy roads.

A major selling point for every car in the Lexus range is the Mark Levinson sound system. A 15-speaker +  1 sub-woofer setup in this case. Fun fact: Mark Levinson is a Harman sub-brand and Lexus is the only automaker to employ their sound systems.

The setup has been tailormade for each model and boy, can you tell! Like in the ES, the sound quality is impeccable and the cabin insulation makes the experience even richer. The surround sound system manages songs that are heavy on the base a little better than the ES does and the head-unit itself has a patented technology that even enables compressed songs to be played in almost DVD-like quality.

The RX 450h employs a hybrid powertrain, comprised of 3 propulsion motors – a 3.5-litre, petrol V6 engine, along with two electric motors mounted on the front and rear axles respectively. Put together, the system delivers a peak power output of 313PS and 335Nm of torque. Unfortunately, we didn’t get to test out the car extensively, as the narrow roads of Ooty combined with peak season traffic kept us at a crawl for the most part, but that did give us an idea of what the car will be like in the city.

From a standstill, you begin in pure EV mode, so you move ahead in absolute silence, unless the air-conditioner is running or there’s something playing on the music system. That said, the creep action won’t feel alien to anyone who has driven a conventional automatic car. Get a little heavier on the throttle and the engine fires up to charge the battery and to drive the front wheels.

The RX 450h picks up the pace, but the initial acceleration didn't feel particularly exciting. It’s not underwhelming either and there’s enough performance to make quick overtakes on narrow hilly roads. You do get paddle-shifters in the F-Sport and those let you toggle through six virtual gears to help quicken things a bit.

With all that hybrid witchcraft on board, the RX 450h weighs in at 2,100kg-2,210kg. Even so, Lexus claims it can manage a 0-100kmph time of 7.7 seconds. In fact, the bigger headline is that despite its heavy weight it can manage a claimed fuel efficiency figure of 18.8kmpl!

That’s largely down to the fact that the power control unit is always trying to get the best efficiency and even on upward inclines, you don’t need to rev the engine too hard to make quick progress. Drive downhill, and you’re using almost no fuel whatsoever as the regenerative electricity generated while coasting charges the battery and the same electricity is used to power the car when you get back on the throttle.

Most of the time, the RX 450h is silent as monk in meditation. But, to dial up the sense of connection in the F-Sport, Lexus has integrated a “sound generator”, which effectively magnifies the engine note and directs it into the cabin to make the driving experience more exhilarating.

The RX’s driver-centric nature does shine through in the ride and handling setup. This crossover is set a bit on the stiffer side and low speed bumps and potholes can be felt in the cabin. It’s not too uncomfortable, but it makes for weak bad road capability. Get going at 40-60kmph, though, and that stiff edge makes the car quite stable with body roll kept in check very well for a car that weighs over 2 tons and sits 195mm off the ground.

On certain relatively open stretches, we pushed the RX quite hard through sharp corners and it was surprisingly planted and composed. The 235/65-section Bridgestone Duelers offered decent grip while the car’s adaptive suspension helped keep things stable. Lexus also offers the crossover with drive modes (Eco, Normal, Sport and Sport+) that alter the behavior of the engine response, suspension and steering. We found it best to keep it in Sport+, as it makes the RX more engaging to drive without the ride getting too stiff.

The steering itself is quite responsive and offers just the right amount of weight for the speed. There’s no noteworthy feedback, but it can put a smile on your face when you go lock-to-lock, corner after corner. The brakes despite the e-regeneration are also good to use and offer good bite even under hard braking scenarios.

The RX 450h is offered in 2 variants i.e. Luxury and F-Sport, priced at Rs 1.07 crore and Rs 1.09 crore (both prices ex-showroom Delhi) respectively. The F-Sport offers a similar package, but in a sportier avatar, with the addition of front sport seats, paddle-shifters, aluminium floor pedals and an engine sound enhancer.

The Luxury offers a greater number of personalisation options, while the F-Sport is about showcasing the car’s performance pedigree. Both variants are similar in terms of equipment, so the choice just boils down to your design theme preference.

Pure and simply put, the RX 450h is all about making a statement. It’s about giving its elite audience a chance to say “I care about the environment, but I’ll care with flair.” The hybrid powertrain offers good driveability with efficiency, and it is fun to drive while being green too. It’s also coming only in a fully-loaded avatar and while it is certainly priced at a premium, it won’t cost much more than a Porsche Macan or Jaguar F-Pace with a few options added.

Like every other Lexus car, it comes backed by the promise of a hassle-free ownership experience and the brand claims it will offer service expenses that will be half that of the competition’s. Also, it’s a good way to stay ahead of the curve, should diesel cars be a faint memory in the near future. The Lexus RX 450h is an outlandish way of making a safe purchase.