Jaguar had introduced its flagship, the XJ L to provide a perfect blend of comfort and driving pleasure to those who live like a King. Recently, the manufacturer from Coventry upped the ante as it introduced the rear seat package to further enhance the royal treatment for its grandeur buyers. 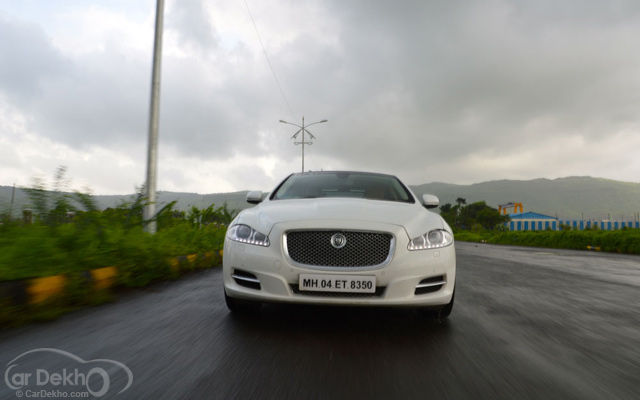 British are known for their royal treatment and in the hunt to discover if Jaguar lives up to its British heritage, we test this flagship model from the British marquee for a spin.

Jaguar’s design DNA had seen a major shakedown since the entry of the new XF, followed by the XJ. The new XJ was a runaway hit for Jaguar, when compared to the previous generations. Millions have appreciated this brave and sharp design of the new XF and XJ, while out went the aged design. The styling on the XJ isn’t just contemporary, but is a perfect blend of coupe and four-door saloon.

The XJ L looks perfect for top guns, its almost as if tuxedo and three-piece wearing aficionados hewed this saloon for their personal use. The new-generation has more razor-shape sleek styling, compared to the previous generation that had carriage-clock-age fashioning.

The snout of the XJ gets the large chrome grille with sleek and sharp headlamp design. A similar grille is seen on the facelift version of the XF, with the snorting cat embossed at the centre. The duo fuses well with the step down crown hood that gives it a nose cone-like feel. Sleek design of the XJ L with the gleaming LEDs makes it feel like a low airplane coming towards you— when viewed head-on. Long wheelbase and sloping roof makes the XJ L’s silhouette look radical and striking modern design— a flair generally seen on Italian design. Even the rear end looks voguish and subtle with no sort of chrome drama.

The inside cabin of the XJ is another highlight. Most of the vehicles in this segment have all the bells and whistles and are beautifully finished. But the XJ L has exquisite details that make you feel elite. Push the start button and the gear knob rises into your hand, the cabin lights and glove box opening are feather touch.

Space isn’t an issue on the long wheelbase version of the XJ L. The front row seats have ample of room for your legs and head and you sit on large, comfortable, body-hugging seats which won’t let you feel tired after driving for hundreds of miles.

For complete royal treatment, slip into the second row. A whoosh of wows will gush out even from the most critic personalities. Jaguar has taken special care to keep the Emperor happy when he travels in the XJ L. The throne for the Emperor has been crafted to give the most comfortable seat. Even, the front row seats are miles ahead offering limo-like space. If mi ‘lord opts for the rear seat package, he gets extravagances like recliners, massage and footrest for added sheer pleasure. And to soothe his ears, the XJ L gets a 1200W music system with 20 speakers.

Jaguar has plonked in a 3.0-litre V6 diesel engine in its flagship model. This oil burner produces 275bhp of maximum power and 600Nm of hollering torque. This might look insufficient. But the case isn’t so, the oil burner doesn’t slur. The all-aluminium construction of the XJ L makes it only 15 kilograms heavier than the XF S. Slam the throttle and you will immediately notice the eagerness and the willing nature of the engine.

We have already spoken in great detail about the high-levels of refinement of this engine, when we drove the Jaguar XF S . Hence, we shall not speak in great detail about it. This oil burner has deep reserves of torque that provides pretty much all the thrust you could wish for. XJ L freely stretches its long legs, when out on the open road. XJ L propels its rear wheels through a six-speed self-shifting ZF transmission. The shifts on the box are fine, but this time lag is reduced once shifted into Dynamic mode. The tall sixth gear and the frugal diesel engine make XJ L a mile muncher.

The ride suppleness on the XJ L is excellent. It doesn’t thump or smack over potholes or jolts, it glides smoothly over it. In the Dynamic mode also, the secondary ride is sorted and smooth. The suspension has been tweaked to give the best ride to the King.

The long wheelbase and all-aluminium construction makes the handling characteristics of the XJ L agile. Push it through a corner and the meaty tyres adhere to the road. So, when the King wishes to drive himself to a party, he has flappy paddles and the precise steering to play with. Engage the Dynamic mode, use the paddle shifts and you arse ready for a track day weekend.

With the recently added bells and whistles to the XJ L, the cat from Coventry jumps a leap forward of its German slayers. Each of the flagships available in India is class leading and have their own individual strengths.

But XJ L strikes a pose between style and substance along with luxurious trimmings, making it the ideal choice.