Amongst the heated battle of sub-four metre sedans, GM India managed to offer the Sail Sedan as an above four metre sedan for similar pricing. The bid was to create a car with comfortable space and frugal engines in a compact affordable package. Despite being a fair idea, it failed to catch on. On the other hand Honda managed to present the same idea in a sub-four metre body. 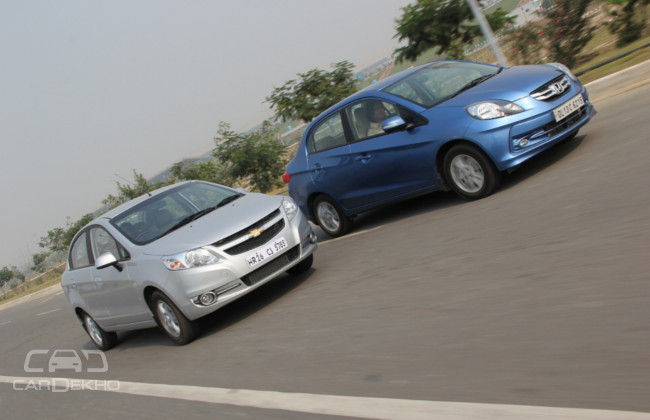 The Amaze was created with maximum cabin space utilisation and a selection of frugal engines. A majority of the customers put their money on the Honda and other sub-four metre sedans, and the Chevrolet took a back seat. In order to garner more sales for the Sail Sedan, GM has given it a mild update to win a few more favours. We get behind the wheel of the facelift of the Sail Sedan against the segment topping Amaze.

Because the Sail does not suffer from a sub-four metre length handicap, it is a more proportionate looking car. The Sail leads in terms of all-around design up against the Amaze. The stronger shoulder line and neater cleaner lines look nicer than the Honda's messy curves.

Too many design curves on the Honda make it look a bit ungainly. At the rear the boot design of the Sail flows around ending in a tiny boot lip spoiler which looks good highlighting the styling synergy from the front to the rear.

The Amaze on the other hand looks great from the side but the truncated boot looks a bit odd as an overall package. It is not that the Honda is bad looking, it is actually a funky looking car, but the Sail looks a bit more correct all-around. The updates on the Sail include a fog lamp surround in chrome finish (except on the base PS variant) and a fine chrome line running on the boot which sprinkles some elegance to its neat styling.

The Amaze too comes with fog lamps minus the chrome, but on the top-of-the-line VX and VX AT versions. Alloy wheels are available for the top variants of both the contenders, but the spoke styling varies for diesel and petrol on the Amaze. All of them are nice looking but the alloy design on the top-of-the-line Amaze petrol variant takes away the glory as the nicest looking with sport and classy appeal mixed in one.

The highlight of this facelift version of the Sail sedan is the interior. New features include two-tone dash colour, new fabric/leatherette upholstery and tiny updates like chrome detailing around the air conditioning vents, blue coloured backlight and chrome tips for the power window switches.

All these additions do improve the appeal of the cabin now which used to be quiet grey and boring. The golden Chevrolet bow now adorns the once dull steering wheel. The dashboard on the Sail looks more grown up next to the funky Honda Amaze.

The Amaze dash is easy to fathom and you quickly understand which switch is where. On the other hand you need to spend time in the Sail sedan to memorise all the switches and toggles. All the four power window switches on the Sail sedan are placed right in front of the gear lever in the centre.

Now this has been termed convenient by GM, but on the contrary it is distracting. Amaze has every control focused towards the driver, so if you need to change a setting it becomes an instinct than a discovery. The colour combinations and enhanced quality on the Chevrolet Sail sedan has been really worked upon in the facelift, and now comes close to the Honda.

One helpful upgrade is the sound insulation on the Sail and considering both the diesels, the Sail's cabin is quieter than the Amaze. Coming to the seats, both the cars offer comfortable supportive seats, but the Amaze has height adjustment on all variants except the base E and EX, whereas the Sail sedan does not have this feature.

This little trinket might put off a few customers, but unlike the Amaze where you sit lower the Sail driving seat is on optimum height for most people. The instrument cluster on both the cars is legible with the Amaze sporting sharp red needles and an informative driver information display.

The Sail sedan's gauges now get cool blue backlit which looks elegant if not sporty, but the digital tachometer is just not fathomable. GM must realise that the car will be bought by everyday folks who cannot understand quickly changing numbers like racing drivers. All the telltales are just fine but a strict no to the digital tachometer please.

Both the cars get integrated 2-DIN audio system with USB, AUX-in and Bluetooth telephony on all the variants except the base versions. Honda equips the EX variant with a 1-DIN system which stands above the base version.

Both these cars come with petrol and diesel engines with the Honda getting an automatic transmission in two of its variants. The cars we drive here are both diesels with the Amaze sporting a 1,498cc 4-cylinder engine producing 98bhp of maximum power at 3,600rpm and peak torque of 200Nm at 1,750rpm.

The Sail sedan gets a 1,248cc 4-cylinder power plant developing 74bhp of power at 4,000rpm and 190Nm of peak torque at 1,750rpm. The higher power development of the Honda clearly shows when you drive the car. The Honda pulls ahead initially but then the acceleration ends at 145kmph where the Amaze has been restricted to. The Sail sedan on the other hand will keep pushing ahead of the Honda till 165-170kmph after which it runs out of steam.

Both the cars have very light clutch feel which makes them quiet easy to wade through traffic infested roads. But the deep clutch dip of the Sail sedan could get annoying at times on constant use in bumper to bumper traffic. The Amaze diesel will return you about 20-21 kilometres to a litre of diesel, and so will the Sail sedan diesel actually.

But the Sail sedan will give you slightly higher range to a full tank of diesel as it eats up 5 litres more fuel in the tank. When it comes to the transmission, nobody can beat that 5-speed slick shifter on the Honda. It just feels extremely easy as the gears slot in seamlessly through the gear box. The shift on the Sail sedan is similar with short throws, but not that easy to work with.

These cars are available in their petrol avatars as well, with the Sail sedan available in 1,199cc 4-cylinder petrol engine developing maximum power of 82bhp at 6,000rpm and peak torque of 108.5Nm at 5,000rpm. The Amaze has a similar capacity 1,198cc 4-cylinder developing 86bhp of maximum power and peak torque generation of 109Nm at a lower 4,500rpm. The Amaze is also offered in a 5-speed automatic variant which Honda claims returns 15.5kmpl.

The ride quality is a slightly more plaint because of the longer wheelbase on the Sail sedan, which is about 60mm longer than the Amaze. The steering on these machines is light and the leather wrap on the Sail sedan feels nice to grip.

However, the steering is too light on the Sail and quiet vague in feel as opposed the Honda which is nicer in communication. Both these cars are quiet stable on the highway, but one peculiar niggle we noticed on the lighter weighed Honda is that the whole car becomes unsettled whenever a car passes by you at high speed or when there are substantial crosswinds on the highway.

On the twisty bits, the Honda equipped with MRF ZVTS starts squealing way earlier despite being lighter the one against the Sail sedan shod with Apollo Alnac. Replacing the Honda's tyres with better quality rubber will greatly improve its cornering capabilities, which we suggest is a worthy upgrade.

The slight update on the Sail sedan has made it an interesting choice for somebody looking for an economical comfortable saloon, but the sheer equipment levels and driving ease of the Amaze edges it ahead. The Sail sedan is a decent car and has mostly what you can ask from it, but the Amaze soils you with a bit more technology and practicality.

Indian consumer is brand conscious, and will continue to trust the caring hand of Honda in terms of reliability and practicality for their cars. This is where GM must work extensively on that is improving their brand image and products to garner our very competitive and diverse market. The Sail sedan is a decent product but lacks on creature comforts and gadgets. For now the Honda shines ahead with a better car and more bang for buck for our tech savvy and value conscious customers.