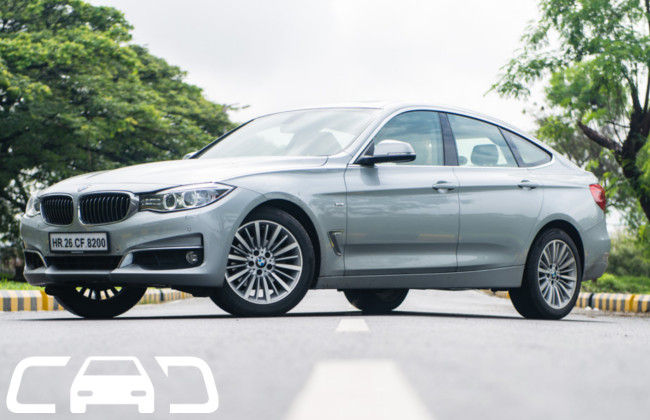 A long distance traveller vehicle is given the Grand Tourer (GT) badge. As always, Italians differ by calling their cars as Gran Turismo. It has been years since GT cars be it performance or luxury, have seen the light of the day and our maturing market is now getting such products. BMW had introduced the 5 GT back in 2010 and now it has introduced the 3 GT, which is the entry-level for this range.

The 3 Series is one of our favourite sedans in the entry-level and now we get our hands on the GT version. Let us find out if this is comfortable and luxurious too as drive the BMW 3 GT.

To begin with, the 3 GT is based on the 3 Series. If you like the 3 Series, and want the same that is larger and more comfortable, there is the 3 GT. Hence, the exterior styling of the 3 GT is similar to the 3 Series. To begin with, a similar style headlamps merge with BMW’s signature kidney grille, however the merge is across a greater surface area. On the regular sedan, the merge area is smaller. This makes the 3 GT look bigger and match its rear proportions.

The side profile also resemblance the 3 Series till the B-pillar, post which the larger rear door and a notchback exist. The 3 GT comes in Luxury trim and hence it gets the same wheels like the 3. The swage line is crisp as rises slowly across the length of this GT. A sharp craving just above the rocker also runs parallel to this. These lines contribute hide the tall stance of the 3 GT. The rear is very similar to the X3 or even the 5 GT.

Interiors of the 3 GT are similar to the 3 Series as the name recommends. The instrument panel of the 3 GT is the same, with of difference at all. There is a three-spoke wheel with multiple functions to control volume, change tracks and also a speed limiter. There is the BMW standard iDrive on the 3 GT and also a neatly designed centre console. Not too many buttons, not too complicated controls. There is also the panoramic roof that makes the cabin look airy.

The front seats are large and comfy for tall people also, and there is sufficient legroom and headroom. The side and thigh support too is good. The 3 GT has loads of space at the rear. This feels almost 5 Series for the rear passenger space that it offers. The seats are comfortably and there is good enough knee room for rear passengers, even for long road trips. This earns this notchback the Grand Tourer badge. The boot is a notchback and it opens and shuts electrically. The 3 GT has a humongous boot space and it is fairly easy to load too with the notchback style of opening.

The 3 GT gets the 2.0-litre four-cylinder diesel engine, which is one of our favourite in this segment. This oil burner produces 184bhp and puts out a maximum torque of 380Nm. This is what makes this engine extremely powerful and to enhance this torque to result in better efficiency and torque output, this engine comes mated to an eight-speed self-shifting single clutch transmission.

There are three modes, ECOPRO, Comfort and Sport on the 3 GT. There is no Sport+ as this hasn’t been built for that. This oil burner is a mile muncher as the engine speeds under 1000rpm when cruising at a speed of 80km/hr on a motorway. It can return a figure of 17 to 18 kilometres to a litre. The eight-speed self shifting box has smooth changes and is quick enough in the Sport mode, in the comfort it is a tad slow.

The 3 GT has been built for better ride than handling, hence it has a softer suspension at the rear. This makes it comfortable for long distance road trips and the rear space adds on to the existing comfort. The conventional 3 Series is stiffer and there isn’t much room for the rear passengers. The boot too is large enough for such driving trips.

The handling is decent if you compare it to the conventional 3 Series. It isn’t all that woah, but it is good for highway and even winding roads. Some might say it’s a bit too soft for winding roads, but then it hasn’t been designed for the track. The steering wheel is also isn’t very heavy making it easy for long trips.

We love the 3 GT, as it is spacious and comfortable. The drivability is good and the dynamics are decent too. Now, the only question that rises is if it is worth the price? The answer is no. If it was a CKD, the price would have been lower and for the price it doesn’t offer the features. We believe BMW should take the CKD route than the CBU for the 3 Gran Turismo to capitalise this market for those looking for a something with a space of a SUV, but the comfort and convenience of a sedan. The pundits state that the Indian market isn’t feasible for Gran Turismos or the estate wagons. That is one reason why BMW has introduced this as a CBU, as a CKD it is a great product to own.