The craze for the fastback saloons is on the rise and there is no doubt that celebrities are eyeing this segment, more than the conventional flagship models. These look chic and at the same time reflect the personality of many of these movie stars, sportsmen and those involved with the glam world. The people do not think about the nitty-gritty like value for money or price vis-à-vis features available. They aren't even bothered about the headroom reduction due to the fastback roof that gives it coupe-like styling. 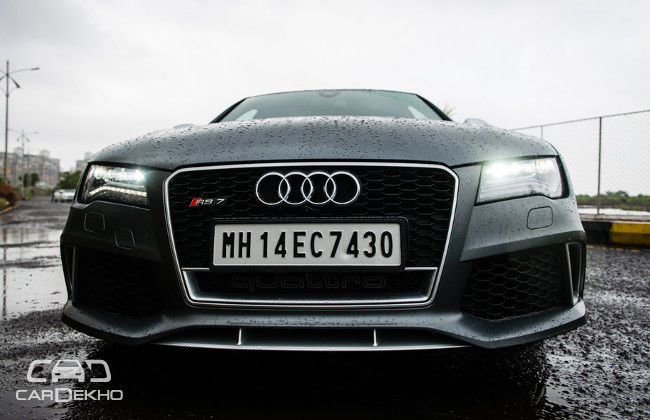 But that wasn't enough for Audi. The Ingolstadt-based auto giant introduced a sportier and dynamic version of the A7 and it is called as the RS7. This is the most powerful Audi sold in India. We lay out hands on this saloon and share our driving impressions.

To begin with, the RS 7 shares the same design and platform of the A7. However, the there are several changes on the RS 7. For instance, the front grille on the RS 7 is larger and then there is the A7. Then there are the matte silver wing mirrors, bigger wheels, low profile tyre, rear spoiler and the large disc brakes for fade-free braking. The RS 7 badging too is prominent and the colours on offer are sporty than classy.

The changes on the RS 7 aren't any in terms of shape or dimensions, but they are subtle. The RS 7 does look a lot more aggressive than the A7. Our press demonstrator was a matte grey saloon, which did stand out. The sloping roof of the RS 7 gives it a coupe-like stance and the tyres fill the wheel well making it look a lot more macho and the alloy wheels add a lot more stance to the styling.

Step into the inside of the RS 7 and you shall notice that it has a perfect meld of luxury and sportiness. The RS 5 that we had reviewed previously was all about the trendy interiors and didn't have much of luxury in it. The RS 7 on the other hand is embellished with luxury. Step inside and you shall be greeted by the Audi interiors that are premium and sporty too. The three-spoke steering wheel has a flat bottom and the instrument cluster sports twin dials, the AC vents on the RS 7 on the centre console aren't the same size and then there is the Audi MMI music system. The gear knob sports the RS badge on it.

The front row seats are bucket-like, as they cocoon around you, giving a better support for your back and sides than the A7. The seats are bolstered with leather and suede. The thigh support can be extended too, however this has to be done manually. The rear seats are spacious too, there is loads of knee room, however it is the headroom that is tight due to the sloping roof. To be honest, you won't want to be seated at the back, especially when you have an option to drive such a powerful saloon. The boot of the RS 7 is humongous and it is more than sufficient to gobble your weekend luggage.

To begin with, this is a 4.0-litre bi-turbo petrol engine, however the astonishing bit is its power output of 560bhp, which makes it the most powerful Audi in India. This is more powerful than Audi's flagship sports car- R8. It is all due to the twin turbos that spool that extra power. A lot of old-school enthusiasts including me believe that everything is in the engine displacement, this downsizing kills the fun. But I shall be honest, after driving these new engines be it on Audi, Mercedes-Benz or even the BMW M5, which for the first-time has a eight-cylinder mill than the V10s, I'm not at all disappointed. There seems to be no compromise in the power and they don't feel that punch either. Only question that springs up, is the reliability of the engine if it gets so much turbo boost.

Plant your right foot and you shall be amazed on the boost the turbo produces. There isn't any turbo lag, as this engine has been built for performance than efficiency, but the surge of the twin turbos is prominent. You can overtake one without even getting into the turbo band, however if you do, then there is a gust of boundless power that will push you deep into your seat and create a bellow in your chest. The S-Tronic box too is good enough, however we don't appreciate the jerky downshifts in the sport mode. On the track this is fine, but with occupants in the car on the road we won't suggest the Dynamic mode, the Comfort mode itself is sufficient to push.

It is an Audi with a RS badge, so it needs to have agile handling. Despite being five metres long, there isn't an affect on the RS 7 when it comes to handling. It feels nimble and compact. As this is a Quattro, there isn't that slide for the rear wheels, even if there is the Quattro gets it on track in milli-seconds. Go fast around a bend and the tyres will obey your command.

The steering wheel too is light in Comfort and Dynamic is where it weighs up. You can however change the steering settings in Custom mode and make it to light even if you think it is heavy. The ride even in Dynamic mode is comfortable and this is despite having such low profile tyres.

The RS 7 looks stunning and is also the most powerful Audi on sale in India. This has overshadowed our love for the RS 5 and we will recommend this over the two-door coupe. The A7 is just brilliant but if you have extra money to spare don't look any further than the RS 7. This is the saloon you should procure if you want every eye on you.