Does the updated WR-V cut the mustard in a segment populated by popular sub-4m stalwarts? 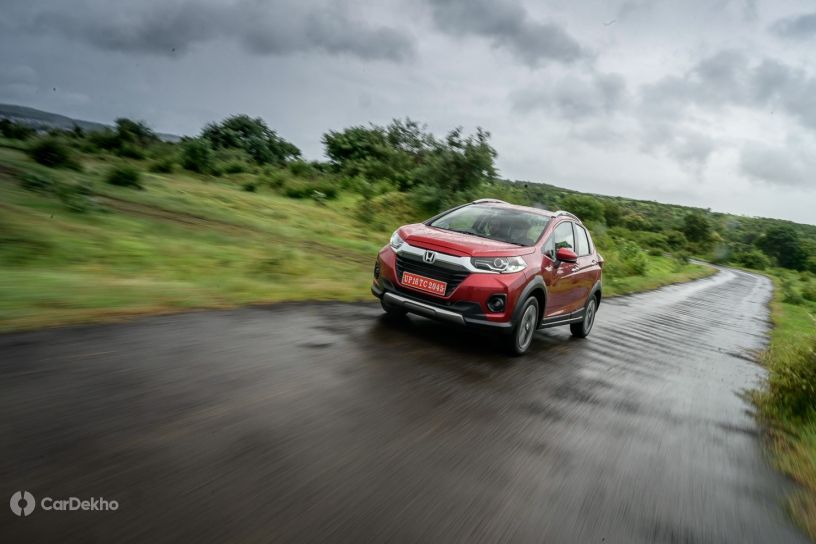 The Honda WR-V has had its fair share of success in the past but things are quite different in 2020. Its sub-4m rivals have not only increased in numbers but also in capability. It should be no surprise then that the work’s cut out for the Honda WR-V and its handful of updates. The question is, is it enough to grab your attention and get you to step inside a Honda showroom?

If the previous Honda WR-V’s design appealed to you, the updated crossover’s should too. You have to squint hard to single out the exterior changes. There are new blacked-out horizontal slats below the floating chrome bar which gives the grille a more aggressive look. The headlamp’s form remains the same but they now get LED projector units whose throw and intensity is decent for lighting up dark roads. A similar LED treatment has been meted out to the fog lamps as well which are now in a more prominent black housing.

The side and rear profiles are identical, save for a new design for the 16-inch Shark Grey alloy wheels (only with diesel) and a new LED element for the tail lamp.

Tangible changes in the cabin are or rather is, an updated design for the seat upholstery, that’s it. Despite the all-black colour scheme, the interior retains its sense of space, visibility outside, and practicality that was typical of the pre-update WR-V. Quality levels are still okay-ish but cars like the Hyundai Venue, Mahindra XUV300 or even the Tata Nexon have moved the goal post further.

While the dashboard is majorly made of plastic, there are dashes of silver around the AC vents, steering wheel, instrument cluster and the central console. The piano black finish for the automatic climate controls serves little purpose other than being a smudge magnet. That said, Honda’s clever packaging does come into play with the dedicated cooled cup holder for the driver and the deep armrest storage which also packs a 12V accessory socket. Although, we would have appreciated a USB port inside it.

When perched on the driver’s seat, you’ll realise that the seats are a touch more supportive than before. It is quite adept at fitting people with a taller and broader frame and even if you aren’t one of the vertically gifted drivers, fret not. The WR-V gets a height-adjustable driver seat along with tilt and telescopic-steering adjust as standard. Dial in the big glass area and finding a nice driving position should be easy in the Honda. This top-spec WR-V VX variant is loaded with equipment like keyless entry, push-button start/stop, a leather-wrapped multi-function steering wheel, blue-backlit multi-information display, and cruise control which is standard, unlike before when it was limited to the diesel variant only.

The touchscreen is still the same slightly dated 7-inch Digipad 2.0 unit which gets Apple CarPlay and Android Auto. Our grouse with this infotainment is that it takes its own sweet time to boot once the ignition has been fired up. Even after that, the screen is slightly difficult to read under direct sunlight. It gets vertically stacked controls right beside it, complemented by a decent 6-speaker sound system which is acceptable but nothing worth writing home about. You get an HDMI and USB port for video playback in the WR-V.

The features list should have seen at least a slight bit tweak if not an overhaul. It still misses out on segment staples such as automatic headlamps, rain-sensing wipers, wireless charging, rear AC vents, and armrest with sliding function for the front armrest.

The seats themselves are quite squishy and might lead you to squirm slightly on the long journeys. The knee room and headroom are quite generous for even 6-footers but the under thigh support is a bit of a downer in comparison. The low-set fixed headrests are also a big miss for a car of this stature as neither are they going to provide any comfort nor any safety in case of whiplash.

The shoulder room is abundant so accommodating healthy individuals won’t be a big ask from the WR-V’s rear row. However, fitting a second-row middle passenger is advisable for petite frames and for shorter journeys due to the protruding floor hump.

Storage capacity is another trump card, testified by the numerous stowage spaces such as cup holders and space in the front armrest and front seat pockets. There are bottle holders in all four doors but they will be a tight fit for anything with more girth than the widely available one-litre water bottles.

Its 363-litre boot space is actually better than several sub-4m SUV offerings such as the Tata Nexon, Maruti Vitara Brezza or even the Hyundai Venue. It should be enough for a weekend’s worth of luggage for a family of four. Yes, filling up the boot should be easy because of the low loading lip but filling it with bigger luggage will be slightly tricky due to the absence of 60:40 split seats.

The safety list remains identical with dual front airbags, ABS with EBD, rear parking camera with parking sensors, high speed alert and rear defogger. What’s praiseworthy is that these features are all standard. The only pieces of equipment you miss out in the entry-level SV variant are a rear wiper with washer and dual horn.

Update to the BS6 emission norms has had a bittersweet effect on the 1.5-litre i-DTEC diesel. Where on one hand, the engine has seen a spike in refinement level, on the other, the performance and efficiency have taken a hit. Besides the reduced engine clatter, the NVH levels have also improved so there has been a reduction in road and tyre noise to enhance comfort over prolonged driving bouts.

This engine still develops 100PS/200Nm and is paired with a 6-speed manual transmission. Yes, an automatic is still missing from the package in all the variants. Its clutch is light and the gear stick throws are short and sure-slotting. The motor feels a bit vibey at the outset but smoothens out as soon as you begin rolling. Nevertheless, it is a tangible improvement over the BS4 engine.

It feels laggy below the 1600rpm mark but not enough to bother you while pootling around town. But you’ll be left playing with only the first and second gear amid slow-moving city traffic. Once you cross into the power band, the torque delivery is a lot linear than the punchy nature in the pre-facelift model. It’s now even more suited to relaxed drivers who’d prefer cruising at 100kmph where the needle hovers at 2000rpm.

The acceleration won’t pin you in the seat but feels par for the course as our Vbox numbers suggest a 0-100kmph time of 12.84 seconds. This is nearly half a second slower than the BS4 model’s 12.43 second time. But the difference increases in the roll-ons -- 30-80kmph now takes 9.75 seconds instead of 8.89 seconds whereas 40-100kmph takes 16.66 seconds instead of 14.22 seconds of the BS4 WR-V diesel. So overtaking will require a bit more planning.

The frugality of the diesel engine has taken a hit in a bid to be kinder to nature. The claimed fuel-efficiency number has dropped from 25.5kmpl to 23.7kmpl.

Just like the seats, the Honda WR-V’s suspension setup is also softly sprung. It sails over minor potholes, slightly disjointed patches and small sharp bumps with aplomb but show it a bigger stretch of bad road and things get a bit difficult for the little Honda. The bobblehead movement gets a bit pronounced. It gets even more bothersome on a serpentine section of roads and this is something you need to consider if your usage is mainly in hilly areas. But the crossover’s ride improves once the rear seats are weighted down by a passenger or two. Its steering feels direct and is light in the city while weighing up nicely at higher speeds. That is a plus when driving for long durations.

Another improvement comes with the brakes that shed speed a smidge better than before. The ABS doesn’t intervene unnecessarily and seems well calibrated too. The brake pedal feels progressive but the second stage comes in a little sharp and though this only comes into play in hard braking situations it does take some getting used to.

With the update, Honda has plugged the S variant to replace it with a new better-loaded SV variant which increases the entry-level price by Rs 35,000. If you are eyeing the top diesel VX variant, you’ll have to loosen your purse’s strings to shell out Rs 65,000 more. What exactly are you paying extra for then? The straight answer is slight cosmetic enhancements and a BS6 engine update.

The reasons to consider this are still the same -- practicality, spacious cabin and comfort. If these aspects are high on your priority list, the WR-V deserves a closer examination. But if you want a buffet of features, a premium interior and an automatic option, there’s no dearth of options in the segment.