Published On Mar 03, 2020 By Nabeel for Ford Endeavour

A smaller diesel engine takes away one of the key bragging rights from the Ford Endeavour. Does this dampen the powerful Endeavour experience? 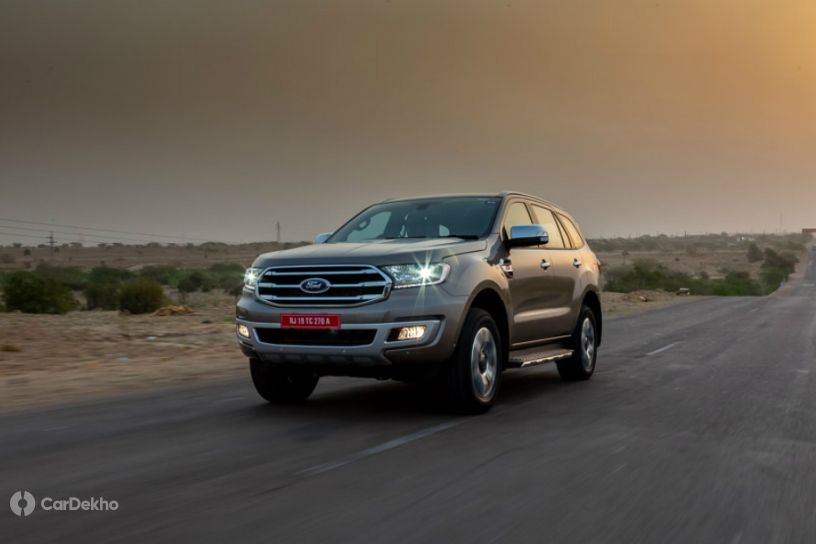 Three thousand two hundred cubic centimeters. Engines don't get bigger than that anymore. And this made owning the Ford Endeavour even more special. But in an era where Formula 1 cars run on engines that displace just 1600cc, the mighty Endy has had to downsize to a humble 2000cc to please environmental activists. There’s just a sole transmission on offer now - a 10-speed automatic for both 4x2 and 4x4 variants. And because of this downsizing, the price of this flagship variant that we have here has gone down by Rs 1.45 lakh. Does this mean you are losing out on the Endeavour experience, or are numbers just ink on a piece of paper?

Since only the drive experience of the Endeavour has changed, we will be focusing on just that in this review. For all other details, check out our first drive review from last year.

The Endeavour received a mild facelift last year. Hence, the BS6 update does not see any cosmetic changes. If you look closely enough, the headlamps get square projector units instead of the round unit from last year. That’s because they now hold LED elements! The proud engine badge on the side fender which had the letters ‘3.2’ embossed in bold now just states the name of the SUV. Other than that, everything else is the same.

Inside the cabin, you continue to get the same dashboard layout as before. Everything feels premium in terms of quality, and it’s definitely worth the asking price. The gear shifter is new. It now features a +/- toggle on the right side, the function of which will be laid out later. The only new feature is FordPass. This is Ford’s version of connected car technology and lets you remotely start the vehicle, check its health, find its location, set geo fencing and make emergency calls. It will also be capable of receiving over the air updates.

The new 2.0-litre engine is called the EcoBlue in Ford parlance. It makes 170PS of power and 420Nm of torque. These fall right in the middle of the older 2.2-litre and 3.2-litre engines. And while the power and torque figures are now lower than the 3.2L engine, it hasn’t hampered performance. Crank it up and the first thing you notice is that this one has a smoother tone. It feels more refined and quieter than the 3.2L. Even the vibrations are better controlled.

Step on the gas and it moves forward a lot smoother than before. This is because the new engine revs more cleanly. The power delivery is a lot cleaner too, which makes overtakes a smother affair. While your daily drive is smoother, the rush of the torque surge is missing. Flooring the throttle doesn't push you back in your seat anymore and that one feeling is missed when you are in the mood. Apart from that, you barely notice the downsizing. On the run too, this engine is a lot quieter. It only gets audible close to 2800rpm. Paired with the new 10-speed automatic, it cruises at 100kmph at just over 1500rpm, making it barely audible inside the cabin.

This combination of a smaller engine and a better gearbox helps fuel efficiency as well. The claimed efficiency for the 2.0-litre unit is 13.9kmpl with the 4x2 drivetrain and 12.4kmpl with 4x4. When compared to the older drivetrains, these figures are better than all the automatic variants, However, the manual 2.2-litre variant was more efficient.

The new 10-speed transmission is a smart cookie. Not only are the shifts quick and seamless, but the transmission can skip some gears in between to suit your driving style. If you are leisurely cruising on an empty road, the gearbox can skip from 3rd to 5th, and then to the 7th cog to keep the momentum going without having to shift often. This helps make the drive smoother. It even gets to the 10th gear at 90kmph, which keeps the engine super relaxed and quiet for cruising.

If you want to get going quickly, the sport mode holds the gears for longer and even gives you a longer engine breaking period. This does make a significant difference in the car gaining speed quickly. The gearbox also comes with a tech called Progressive Range Selection. This lets you lock out gears from top to bottom. You can limit the transmission to just 1, 2, 3 or so on gears. This won't help you inside the city. But when you are off-roading, this is one tool that can get you out of tricky situations.

We also got a chance to take the Endeavour for some dune bashing to get a taste of its off-road abilities and electronics package on offer. And while this engine is less powerful than the older unit, the 10-speed gearbox helps it perform better. Because it now runs on much shorter ratios, you are in the meat of the powerband most of the time, and this lets you carry momentum more easily. Furthermore, the ability of the gearbox to limit itself to the first few gears ensures you don't get bogged down in the middle of the trail. The Terrain Management System alters the power delivery, throttle response and the gearbox logic to maintain optimum traction. You also have the option to engage 4-wheel low and lock the differential to get out of really tricky situations. We did get stuck a couple of times on the dunes, but that was mostly due to our lack of experience, and not the car’s abilities.

To adjust for the weight of the transmission and engine, the suspension has been given a slight retune. It now takes on small bumps and potholes with better composure. The Endeavour always had a slight stiffness to its suspension. While it is still there, it feels like Ford has smoothened the edges to make it more pliant on Indian roads. We only got to drive it on Jaisalmer’s well paved roads, so the finer details can only be laid out in words once we drive it over some broken terrain. The Endeavour still handles its weight quite well when going through a corner. There is body roll but it won't make you nervous, or scare the occupants.

Like before, standard safety features include six airbags, ABS with EBD, traction control, ESP, hill-start assist, auto headlamps and wipers, along with front and rear fog lamps. It also gets TPMS (tyre pressure monitoring system), a rear camera, rear parking sensors and a volumetric burglar alarm system that can detect movement inside the car. The Titanium+ adds features like an airbag for the driver’s knee, front parking sensors, hill descent control and an auto-dimming inside rear view mirror.

Yes, the powerful Endeavour experience has become a little sedated. But that's only when you compare it to the mighty grunt offered by the older 3.2-litre engine. However, if you have never driven the older Endeavour, you won't even notice the difference. The 2.0-litre engine does not feel underpowered and is in fact easier to drive inside the city. And while the new 10-speed transmission adds sophistication to the overall drive, the connected car tech keeps the feature list up to date.

The Endeavour BS6 is currently being offered at introductory prices that are valid until the end of April. Ford says it will then increase the prices by upto Rs 70,000. Even then, the Endeavour will be less expensive than it’s arch rival, the Toyota Fortuner, and also the older 3.2-litre variant. This makes its value for money factor even stronger. So if you have been eyeing the Ford Endeavour for some time, your timing couldn't have been any better. And don't forget, if you want to sell your old car to buy the new Endeavour, visit the CarDekho Gaadi Store and sell your old car within a matter of minutes.